Ten Things We Learned During Season One of Game of Thrones 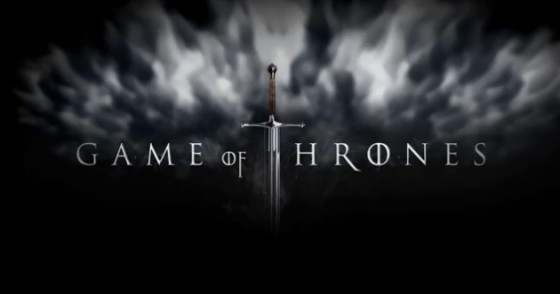 Season one of Game of Thrones came to a rousing conclusion on Sunday night. Needless to say, I’ll be in serious withdrawal until chapter two premieres next spring. It’s almost impossible to summarize all that did and didn’t happen during the first ten episodes of this epic series. Instead, I’ll cherry-pick some things I learned while watching the best inaugural season of an HBO show since The Sopranos.

What little we saw of these mysterious, deadly creatures of the North was enough to whet our appetites for what I anticipate will be massive carnage in season two. I love the fact that each wolf seems to mirror the personality of their Stark owner. Ghost, the runt of the litter, is a silent beast seething with rage, just like the bastard Jon Snow. Grey Wind, a loyal warrior that allegedly killed ten of Jaime Lannister’s soldiers, is a perfect familiar for Robb, the King of the North. Nymeria is fearless and fiercely independent, much like Arya. Methinks the dire wolves will assume a larger role in the future. 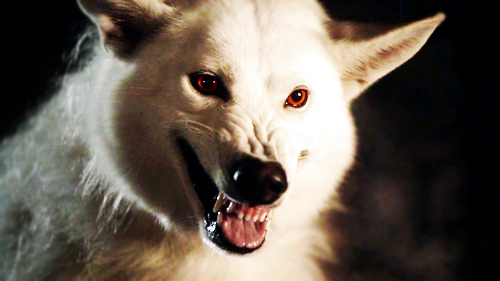 The Lannisters are one freaky family

I suppose it’s not an accident the most normal of the Lannister clan is the so-called outcast, Tyrion “The Imp.” The rest of the brood are a bunch of incestuous, narcissistic villains hungry for power. Not only does Cersei bang twin brother Jaime, but she also dips her toe into the family gene pool with cousin Lancel. As a whole, they are very Roman-like in their duplicitous, depraved behavior. Seeing them crushed one by one will be very satisfying, although something tells me they won’t be disposed of easily. 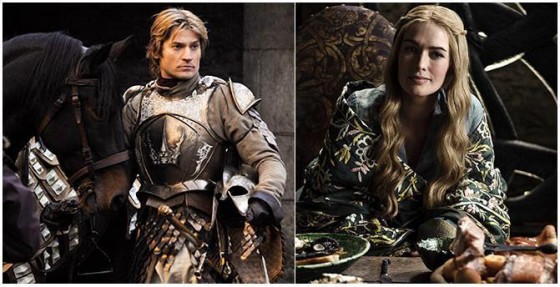 Especially one gang-raped by Dothraki warriors. Daenerys Targaryen (aka Khaleesi) and Khal Drogo’s plans to conquer the Seven Kingdoms side-by-side were smashed to pieces once Drogo fell ill, and the Maegi Mirri Maz Duur was called upon to save his life. A dead newborn son and a resurrected zombie for a husband wasn’t what Khaleesi had in mind when she asked the witch for help. However, the “Stormborn” gets the last laugh in a big, big way. 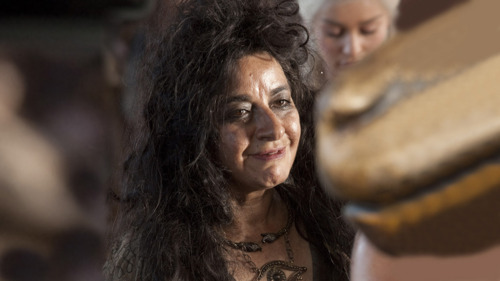 Arya is going to be a problem

And I mean that in a good way. Besides Tyrion, who I’ll get to shortly, Arya was my favorite character in season one. She is very much her father’s daughter, but possesses one thing her daddy lacked: guile. Her hatred for the Lannisters reached its boiling point after Ned’s execution. Stripped of innocence, this bullheaded little girl seems destined for great things. If she can harness her rage, Arya will become a force to be reckoned with. Nothing would please me more than seeing her drive a sword into Joffrey’s throat. 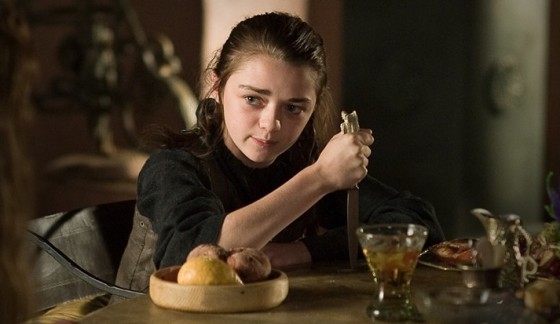 Speaking of Joffrey. Has there been a more hateable teenager on television in recent years than this tow-headed prick? I can’t think of one. The mutant offspring of Jaime and Cersei is a demented fiend driven by bloodlust. With so many parties vying for control, his reign on the Iron Throne seems fleeting. Perhaps that’s just wishful thinking on my part. Tyrion being anointed Hand of the King in the finale is intriguing. It should make for some explosive confrontations between “The Imp” and the nephew he detests. 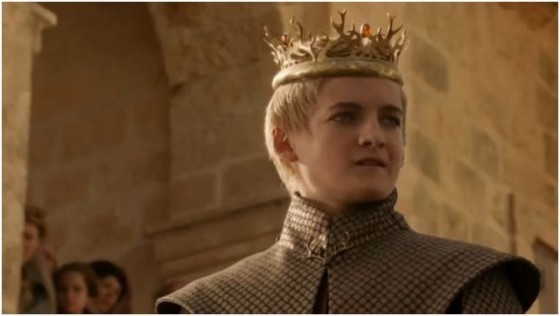 Breastfeeding past the age of 2 isn’t advisable

Lysa Arryn and her son Robert’s creepy oedipal relationship is one of the strangest in the GoT universe. The sight of the six-year-old brat suckling from his mother’s breast is disturbing on so many levels. I have no idea what becomes of the sickly lad, but I can do without him feasting on momma’s milk in season two. 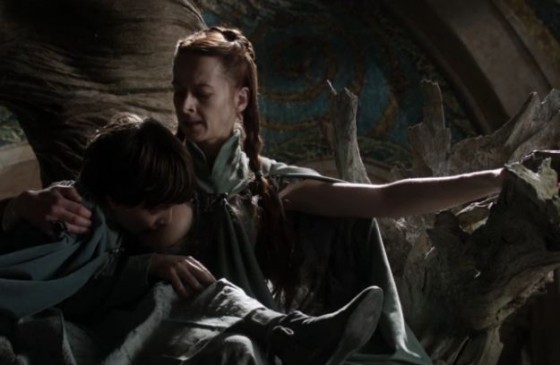 The Seven Kingdoms is chock-full of hot whores

From the firecrotched Ros to Littlefinger’s bordello of babes, there doesn’t appear to be a shortage of hot looking whores for the men (and women) of the Seven Kingdoms to sample. Gratuitous nudity is key to any sword and sorcery series, so the presence of these skilled practitioners in the sexual arts is a welcome reprieve to all the beheadings and backstabbings that permeate the land. 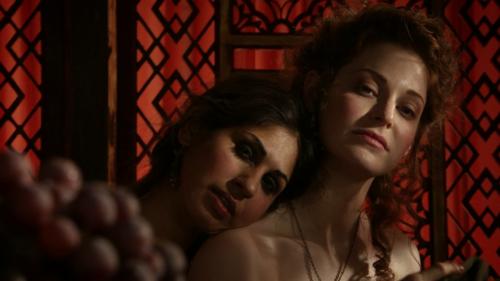 Peter Dinklage deserves every acting award in the world

Anyone who has seen The Station Agent or Nip/Tuck already knows Dinklage is a fantastic actor, but GoT has provided him a role befitting his numerous talents. Credit author George R.R. Martin for crafting such a sharp, witty character capable of charming and/or scheming his way out of the direst of situations. Dinklage nailed every single line of dialog and ended up stealing the majority of the episodes, even when relegated to a lesser story thread. The Emmy committee should have their heads encased in molten gold if Dinklage doesn’t win. 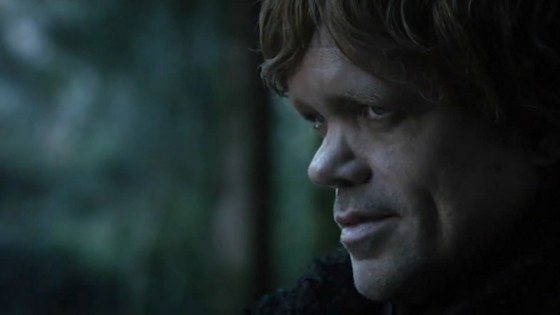 Ned Stark is better off dead

I know, I know, we’re all still upset over Ned’s premature exit. I feel bad for Sean Bean, who deserves a meaty part on a long-running series. That said, I don’t feel bad for Ned. Why? Because he was totally unprepared and ill-equipped to play the “Game of Thrones.” He put honor before logic, which is admirable, but also extremely naive. Poor Ned was duped at every turn by those he was warned not to trust. Bottom line: he got what he deserved. Besides, his death was a necessary catalyst for the Hell that is about to be unleashed on all of Westeros.

From the first moment the three dragon eggs appeared in episode 1, I had a suspicion they would one day hatch. Khaleesi’s obsession with them, and dragons in general, was intricately weaved by the creative team throughout the remaining installments. A lingering shot of the eggs nestled in their box; a tale from long ago regaling the last of the dragons; the enormous skull in the dungeons at King’s Landing. 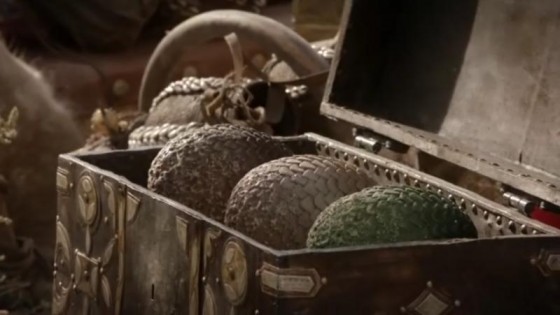 All these snippets served as foreshadowing devices for the final scene in season one. A scene that defines the term “kick-ass.” I admit, I let out a “Yeah!” and pumped my fist when that baby dragon crawled atop Khaleesi’s shoulder and announced its arrival. 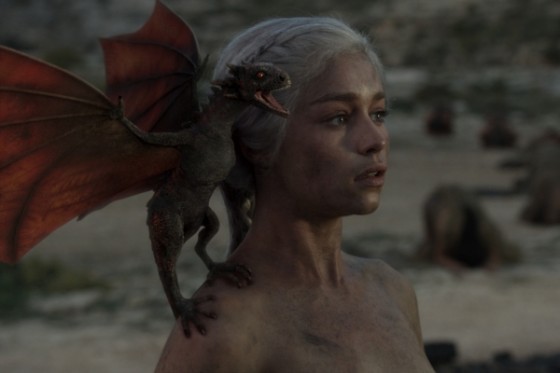 A memorable conclusion to a memorable ten weeks of television.