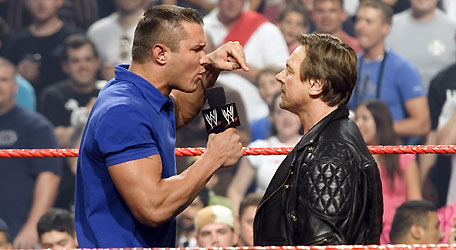 Wrestling promos are usually good for a surprise and a laugh. Physical prowess and a chiseled body are just half the battle on the road to a successful wrestling career. Charisma and skills on the microphone can be the difference between having a career like the Rock, or toiling on the mid-card for life. Take Ken Shamrock for example, he had the look, the athleticism, and the body… but he couldn’t talk his way out of parking ticket. For better or for worse, below are ten wrestling promos that went way wrong (or way right) depending on how you look at them.

Jake Roberts made his name by popularizing one of the most devastating finishing moves of its time, the DDT. That and he carried his pet snake Damien around in a bag. Years later Roberts was still traipsing around America wrestling in high school gymnasiums and casinos. Roberts has a well documented history with drug use, and I’m not so sure what he was using before this interview, but it’s obvious that a casino may not have been the best place to take it.

Here we have the iconic “Scottish” bad boy Roddy Piper, evidently high on gas, rambling on about The Village People, lipstick, Jacques Cousteau, having his dick taken away, and insinuates that The Mountie may actually be gay for him. Remember kids, don’t do drugs.

All you can do is laugh when Booker T realizes he accidentally dropped an “N-bomb” while calling out Hulk Hogan. Sensational Sherry finds it funny, but Booker is beside himself.

There’s a reason you’ve never heard of Jumpin Jeff Farmer and uh… this is it.

Sid kind of looked like Ted Danson’s steroid taking half-brother with a sick Jheri curl. He was infamous for botching shoots and interviews, here he asks for a redo during a live promo. Ahh, no.

This might help you recall how much of a waste pit WCW was during their downward spiral. It’s not that Scott Hall is garbage on the microphone here, the fans are tossing junk in the ring because they’re allowed. That kind of shit would get you tossed in the WWF. It’s a creeper, but wait until about the :46 mark. Stay classy, WCW fans.

Booker’s got a better sense of humor this time around. Neither X-Pac or Kevin Nash can keep it together when Booker T mocks Shawn Michaels’ entrance theme. Booker himself seems to have gotten the biggest kick out of it.

Everything bad you’ve ever heard about the effects of steroids is on display here. The “Total Package” Lex Luger is erupting with rage over being booked in some backwoods wrestling promotion (like he could get work somewhere else?). He can’t even get out of his shirt he’s so jacked up.

Some consider him among the greatest wrestlers of all time. That’s warranted, he could topple or match anyone on the microphone, and in his day he was a high-flying daredevil. He was crazy, but he fucking rules.

Derangement, lunacy, senselessness, idiocy. All would be fair when describing the one and only Ultimate Warrior.