Ten Tunes About the Jungle 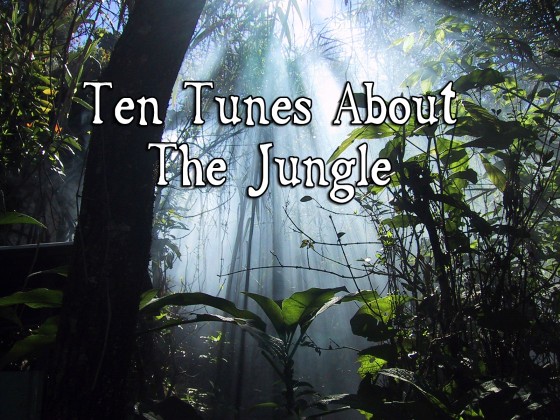 There are several requirements one needs when one wants to create a rockin’ tune about the goings on in, or acting like you are from, the jungle. It helps to have a few raucous jungle critter noises placed throughout the tune such as birds, lions, and possibly elephants. This brings up an interesting fact as well. Apparently musicians in all their infinite wisdom can’t seem to tell the difference between a jungle and the African Savannah: lions and elephants don’t live in jungles. But that’s semantics really, since every song about a jungle makes mention of a lion in some way.

But I digress. Also, when writing a song for or about jungle life, one might consider mentioning Tarzan, who did after all live in a jungle. Or perhaps use the actions and movements of the local natives. This has proven useful in the past as well. Sadly, only a song or two about jungles has surfaced recently, as most were written and performed decades ago. Evidently it’s a trifle out of fashion. Oh well, enjoy ten tunes that will never leave the jungle.

Prodigy
Ruff in the Jungle Bizness

I don’t think I’ll ever understand the appeal of Prodigy. Sure I get Brit-Punk-Electronic stuff, but there’s just something about them that rubs me the wrong way. Oh well, it’s a damn song about damn jungle business so it gets in.

People often say you need some kind of “state of soul” to play the Blues, but in my opinion, there is no musical “soul” quite like Bob Marley. The man was a living legend and pure inspiration for many performers since.

Remember back when Disney really hit it out of the park with classic songs that were destined to live on forever? Yeah, it’s been a long while. Anyway, this is absolutely one of their most unforgettable songs of all time.

Oh sweet, sweet Amanda Peet, how I miss the ’80s. If ever there was a song that really encompassed the overt ridiculousness and bourgeois theatrics of ’80s music, “Tarzan Boy” would certainly be it. Man, I miss that decade…

The Lion Sleeps Tonight
The Tokens

Yeah, sure, this song has been covered by everyone including your mom, but it’s the Tokens version that everyone really remembers. Well, that and the the one in The Lion King sung by Timone and Pumbaa. But you know what I mean.

I’m not entirely sure if this song refers to love IN a jungle specifically, or about a jungle-type love between two people including vines, foliage and possibly snakes. Trouser snakes.

Stevie Wonder could pretty much sing a restaurant menu and I’d be all over it, but there’s something kinda, I don’t know, icky about this song. No, it’s not the interracial themes; I’m just not sure I want a fever of any kind, jungle or otherwise.

Bungle in the Jungle
Jethro Tull

Jethro Tull was the first concert I ever attended. I was three and my parents couldn’t get a sitter. I know this means absolutely nothing to any of you, but I thought I’d mention it. This happens to be my favorite jungle song, too.

Jungle Boogie
Kool and the Gang

If this doesn’t immediately remind you of Pulp Fiction, you need to watch more good movies. Funk. Fuckin’. Tastic.

There really couldn’t have been any other choice, could there?