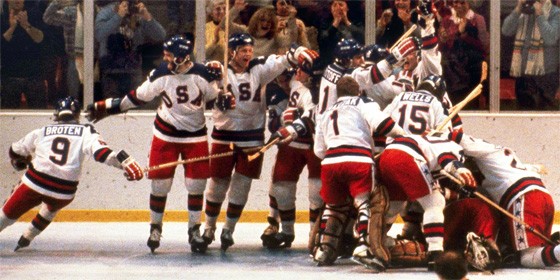 Editors’s Note : Republished in honor of the USA winning the World Junior Championship!

If you’re a hockey fan, the Olympics are the one sporting event that can bring out your inner seven-year old. Before NHL players were allowed to participate in the Olympic Games, hockey fans had to get their International fix from World Championships, World Junior, and the occasional Canada Cup or World Cup. Below we have a list of some of the most unforgettable moments from International hockey play. Some are moments of celebration that will be ingrained in our memories forever, others being enormous upsets or acts of violence that can be swept under the rug but certainly not forgotten.

When Vladimir Korpat scored the eventual game winner on a 70-foot clapper it not only signaled the arrival of Belarus on the International hockey scene, but it launched Sweden’s poor Tommy Salo into a downward spiral that saw him out of the NHL less than three seasons later. Belarus went on to place fourth in 2002 after notching their first Olympic win in what is considered one of the greatest upsets in Olympic history.

Not International competition per se, but when HC CSKA Moscow (a.ka. “The Red Army”) and the Soviet Wings visited North America over New Years ’76 several NHL clubs treated the games with no less intensity than a communist invasion. The Red Army had already taken two out of three contests versus the New York Rangers and Boston Bruins, while managing a tie against the great Montreal Canadiens. Hell would freeze over before Bobby Clarke and the goonish Stanley Cup champion Philadelphia Flyers were going to fall to the hated Russians.

The “Russian Rocket” Pavel Bure was one of the NHL’s most prolific scorers and arguable its most exciting player before a series of knee injuries cut his career short. During the 1998 Olympics in Nagano, Bure piled up nine goals in six games including his incredible five-goal performance to lead Russia 7-4 over Finland in semi-final play. Russia would later fall to Dominik Hasek and the Czechs in the gold medal game, but Bure’s performance against Finland stands as one of the most dominant displays in the history of International play.

This infamous bench-clearing brawl would cost Canada a shot at the gold medal (although leading the Russians 4-2 at the time, the Canadians need to win by five goals to claim gold). At the center of the melee was Theoren Fleury, but everyone on both sides would become involved before this one cleared. Both Canada and Russia were disqualified from the tournament, and this epic, epic brawl stands as a testament that shutting off the lights is no way to break up a ruckus.

If you thought Bobby Clarke was a hothead as a general manager then you probably haven’t seen much from his playing days. Although Clarke was a part of Canada’s best line with Paul Henderson and Ron Ellis, there is one play in particular that Clarke is best remembered for from the ’72 Summit Series. His slash of superstar Valeri Kharlamov broke the Russian’s ankle and eventually eliminated him from competing. Just one day after claiming victory in the Summit Series, Clarke and his Canadian teammates played a “friendly” versus Czechoslovakia in Prague. You’d think Clarke would be looking to repair his International image, but the feisty Flyer threw a butt-end right into the kisser of a defenseless Frantisek Pospisil.

Hasek’s brilliant play against Canada, and shootout shutdown was just the beginning for the 1998 Czech machine. They would later shutout the Russians 1-0 to be the first country to claim Olympic gold with the help of professional hockey players.

4) Gretzky & Lemieux Seal It For Canada

Some call the 1987 Canada Cup the greatest hockey tournament ever played. Mario Lemieux’s go-ahead goal versus the Russians is arguable Canada’s second most famous goal ever scored, but a look at the replay shows a missed call on Hawerchuk for hooking on the play. Was it missed, or simply ignored as Wayne Gretzky fed the puck to an open 66 in the high slot?

Canada wasn’t just carrying the burden of 50-years without gold, but they also had the weight of crumbling under expectations in Nagano on their shoulders. Looking to match the Canadian women’s hockey team’s gold medal performance, the men had no other option than to win. Backstopped by Martin Brodeur and led by the play of Joe Sakic and Jarome Iginla, Canada would put the their critics to rest with a win over the United States in the gold medal game.

The Lillehammer games became Peter Forsberg’s stage. Forberg scored twice in the gold medal deciding shootout, including his winner which might be one of the prettiest goals of all-time. Lillehammer was the first sign that the Flyers may have got the wrong man after acquiring Eric Lindros from the Quebec Nordiques for a plethora of players, including Peter Forsberg.

1) The Miracle On Ice

There’s not much to be said about “The Miracle On Ice” that hasn’t already been said. It’s possibly the greatest upset in the history of sport, and this clip of the final seconds is exhilarating.