See, this title is going to have a lot of people assuming I’m talking about Perez Hilton, or Ricky Martin, or Robert Pattinson… but no. If you check out the photo above, you know I’m actually talking about real, edible fruits here that might be grown only in the ruins of Sodom. It’s hard to tell. So who likes fruit? You, in the back? Cool. Oh, I see a show of hands over there in the cheap seats! You guys like the fruit? I can see by your whoops, hollers, and show of breasts that you all appreciate the sweet, sweet nectar! Well that’s grand.

So, how about this: How many of you have ever eaten anything other than apples, bananas, oranges, and grapes? Hmm… Not many. Well that’s just a darn shame. See, the Gunaxin staff have scoured the local non-mega mart produce section (not really) and I’ve discovered 10 really odd, and, sort of obnoxious fruits that you, too, can try! Sound good? Well, let’s check them out whaddaya say? Oh, and all of these delicious delicacy’s descriptions come courtesy of our friend, Wikipedia. 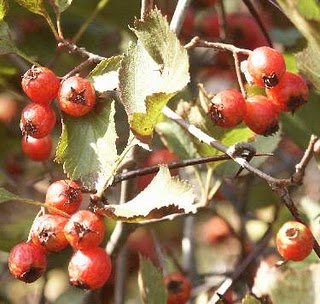 Orally, hawthorn is used for cardiovascular conditions such as congestive heart failure (CHF), coronary circulation problems, and arrhythmias. It is also used to increase cardiac output reduced by hypertension or pulmonary disease, to treat both hypotension and hypertension, atherosclerosis, hyperlipidemia, and Buerger’s disease. Hawthorn is also used as a sedative, antispasmotic, astringent, and diuretic. It is also used for gastrointestinal conditions such as indigestion, enteritis, epigastric distension, diarrhea, and abdominal pain. Hawthorn fruit is also used orally to treat tapeworm infections (wait, what?), acute bacillary dysentery, and amenorrhea.

Um, so… yum, right? Fruit salad, anyone? Actually I was always told that those little ‘cherry-like’ red berries would pretty much kill you. Shows you how much I know. I’m still not going to eat one. 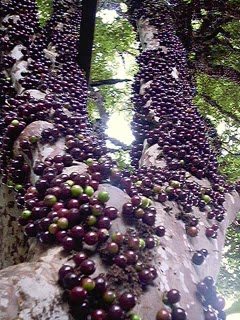 The Jabuticaba (also called Brazilian Grape Tree, Jaboticaba, Jabotica, Guaperu, Guapuru, Hivapuru, Sabará and Ybapuru) is a fruit-bearing tree native to Brazil. The fruit is purplish black, with a white pulp; it can be eaten raw or be used to make jellies and drinks (plain juice or wine – Prison Wine). It has a thick, purple, astringent skin that covers a sweet, white, gelatinous flesh. Common in Brazilian markets, jaboticabas are largely eaten fresh; their popularity has been likened to that of grapes in the US. Fresh fruit may begin to ferment 3 to 4 days after harvest, so they are often used to make jams, tarts, strong wines, and liqueurs. Several potent antioxidant and anti-inflammatory anti-cancer compounds have been isolated from the fruit.

I don’t know about you, but I love my foods tasting astringent. That just screams yummy, don’t you agree? 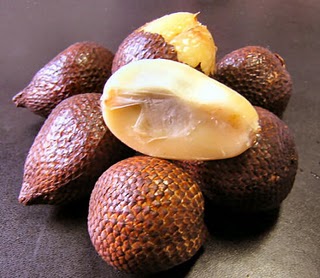 That’s not fruit, it’s a punishment!

The fruit grow in clusters at the base of the palm, and are also known as snake fruit due to the reddish-brown scaly skin. They are about the size and shape of a ripe fig, with a distinct tip. The pulp is edible. The fruit can be peeled by pinching the tip which should cause the skin to slough off so it can be pulled away. The fruit inside consists of three lobes, each containing a large inedible seed. The lobes look like, and have the consistency of, peeled garlic cloves. The taste is usually sweet and acidic, but its apple-like texture can vary from very dry and crumbly (salak pondoh from Yogyakarta) to moist and crunchy (salak Bali).

For some reason I can’t imagine consuming a fruit that has any resemblance to garlic. Don’t get me wrong, I love garlic, but not as a fruit flavor.

7) Buddha’s Fingers – The Fruit That Tickles 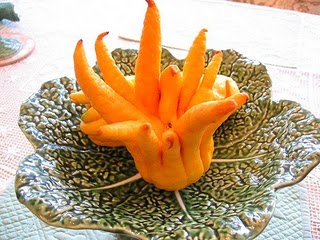 Called Buddha’s fingers, ‘citris medica’, is a type of citron. Plentiful during the Chinese Lunar new year and the lantern festival, locals call it “Fu Shou” or “Busukon” in China and Japan. Its most often eaten for its skin rather than the flesh. The highly prized japanese varieties have the “fingers” fully spread and candied peel is made out of it. It’s smell is acidic and citrus-like with a lemony-rindy flavor.

Now this I’ve had, and, according to the description, it’s good. I was not so impressed.

6) Sapodilla – Didn’t He Fight Godzilla Once? 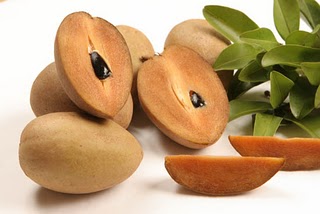 The fruit is a large globose berry, 4-8 cm in diameter, very much resembling a smooth-skinned potato and containing 2-10 seeds. Inside, its flesh ranges from a pale yellow to an earthy brown color with a grainy texture akin to that of a well-ripened pear. The flavor is exceptionally sweet and very tasty. The fruit’s flavor has been compared to cotton candy or caramel. The unripe fruit is hard to the touch and contains high amounts of saponins similar to tannin, which dry out the mouth.

Wait, did you say globose and saponins? Count me in! 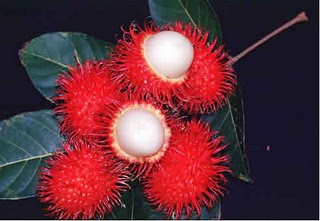 The fruit is a round to oval drupe 3-6 cm (rarely to 8 cm) long and 3-4 cm broad, borne in a loose pendant cluster of 10-20 together. The leathery skin is reddish (rarely orange or yellow), and covered with fleshy pliable spines, hence the name rambutan, derived from the Malay word rambut, which means hair. The fruit flesh is translucent, whitish or very pale pink, with a sweet, mildly acidic flavor. The single seed is glossy brown, 2-3 cm long, with a white basal scar. The seed is soft and crunchy, is edible, and may be eaten together with the pulp.

You know what attracted me to this fruit? The fact that it’s only mildly acidic, because majorly acidic would be kind of a turn off, ya know? 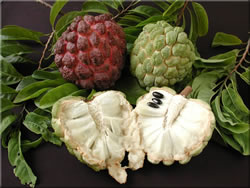 No. There is no way this isn’t an Alien egg.

Annona squamosa (Sugar-apple, Sweetsop or Custard Apple) is a species of Annona native to the tropical Americas. The fruit is usually round or oval, slightly pine cone-like, 6-10 cm diameter and weighing 100-230 g, with a scaly or lumpy skin. The fruit flesh is edible, white to light yellow, and resembles and tastes like custard. The seeds are scattered through the fruit flesh; they are blackish-brown, 12-18 mm long, and hard and shiny.

It’s not so much the look of this fruit, which in and of itself is pretty damn revolting, but it is the fact that it tastes like custard. That’s like opening an orange and finding pudding inside. Hm. 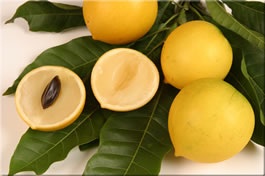 A classic case of looks being deceiving.

The abiu (Pouteria caimito) is a tropical fruit tree native to the Amazon. The fruit has a round to oval shape, sometimes pointed, smooth bright yellow skin when ripe, and contains one to four ovate seeds. The flesh of the fruit is white, translucent, mucilaginous, fragrant, and described as having a creamy texture and a sweet caramel-like flavor. When not fully ripened the fruit has a gummy or astringent quality due to naturally occurring latex. Most often eaten out of hand, abiu can also be used in ice cream.

So, basically, it’s like sucking on a piece of scratch-and-sniff plastic fruit. Outstanding. 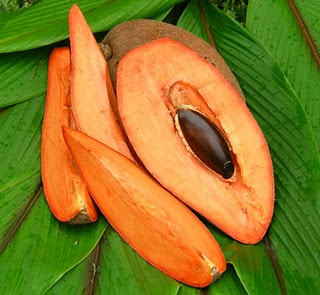 The melon is about 10 to 25 cm (4 to 10 inches) long and 8 to 12 cm (3 to 5 inches) wide and has orange flesh. The melon is eaten raw out of hand or made into milkshakes, smoothies, and ice cream. The melon’s flavor is variously described as similar to pumpkin, a combination of pumpkin, chocolate and almond, or a mixture of sweet potato, avocado, and honey. Some consider the melon to be an aphrodisiac. The brown skin is somewhat between sandpaper and the fuzz on a peach. The melon’s texture is creamy and sweet. 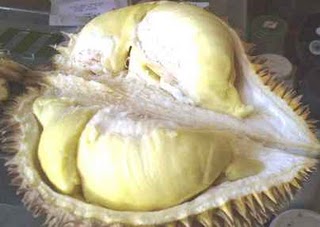 Ladies and gnetleman, your demon seed.

Widely known and revered in Southeast Asia as the “King of Fruits,” the fruit is distinctive for its large size, unique odour, and formidable thorn-covered husk. The fruit can grow up to 30 centimetres (12 in) long and 15 centimetres (6 in) in diameter, and typically weighs one to three kilograms (2 to 7 lb). Its shape ranges from oblong to round, the colour of its husk green to brown, and its flesh pale-yellow to red, depending on the species. The hard outer husk is covered with sharp, prickly thorns while the edible flesh within emits a distinctive odour, which is regarded as either fragrant or overpowering and offensive. The odour of the ripe fruit is strong and penetrating even when the husk is intact. Due to the unusual odour, the durian is forbidden from certain establishments such as hotels and public transportations in Southeast Asia. The odour has prompted many people to formulate evocative descriptions with views ranging from those of deep appreciation to intense disgust.

I have not tasted, though I have seen with mine eyes and suffered with mine nose and I, for one, have decided this is the fruit that grows in Hell and is cultivated by the damned.