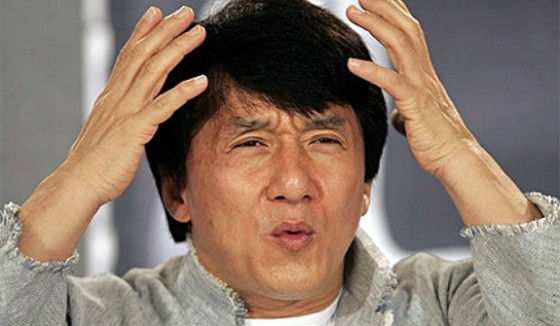 I know you all know exactly what I’m talking about. There you are, perusing FaceBook just scrolling through your friends vapid and pointless updates about cookie baking, weight lifting, and vaginal mesh surgeries, when you suddenly stumble on such a vicious slaughtering of the American English Language that it’s almost painfully jarring. You sit back a second, reassess the terrible grammar in front of you, and even blink a few times in hopes of wiping away the abhorrence you’ve just seen. But it doesn’t help because it’s still there, and it’s just as horrifying.

Take a look, you know you’ve seen these before. Probably some time today! Oh, and just to clarify, we’re not talking about abbreviations like LOL and STFU. Those are pretty common and pretty frequently used. So, we’ll give those a pass for now. On with the show!

I get the fact that Social Network sites like FaceBook and Twitter are meant to be concise and quick. But that’s no excuse for grammatical irresponsibility. Look, we all went to school at some point and we are -last time I checked- not a tribe of uncivilized primates flinging shit and picking nits out of each others butt fur. If you’re going to type your feelings on diaper rashes and the kick ass hash brownies you just made, at the very least learn how to fucking spell SERIOUSLY correctly. You’re using all but the vowels as it is! Stop being so lazy. 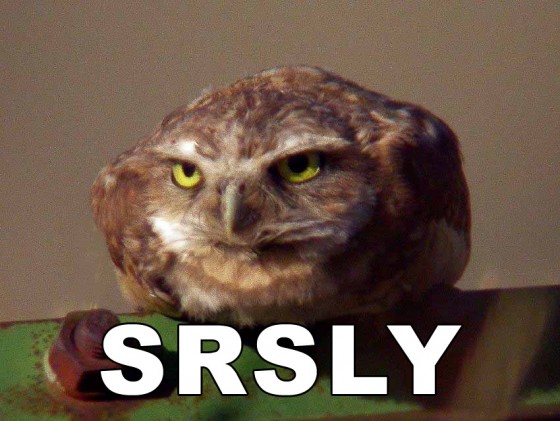 Is it that hard to add three more letters?

This one, sadly, has been around since the dawn of grammar because -guess what- so has ineptitude and complacency. I’m not sure there’s anything much lazier in type that just giving up on a word half way through. It’s not like it’s a long word, and it’s certainly not like you all don’t know how to spell it. Just because you want to move on quickly to whatever other nonsensical bullshit you need to say is no good reason to just throw in the towel at UGH. Speaking of ugh… Yeah you got that one. 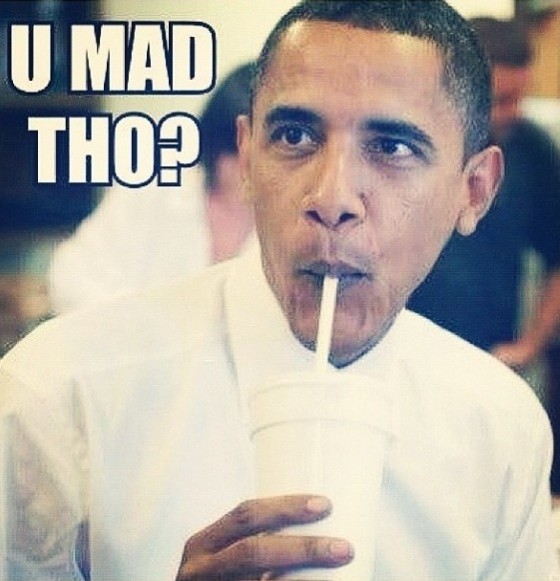 Here we go again. Since you’re already giving a verbal middle finger to whomever you’re ‘Whatever-ing’, why not just finish the word and atleast try to sound a little less like a moronic douche bag. Saying whatever in today’s lexicon is less about offering someone their own choices (as in: ‘Whatever you want, dear.’) and more about dissing the situation at hand (‘Kat’s party was so… whatev). It makes you sound like a complete shithead and you really ought to stop. 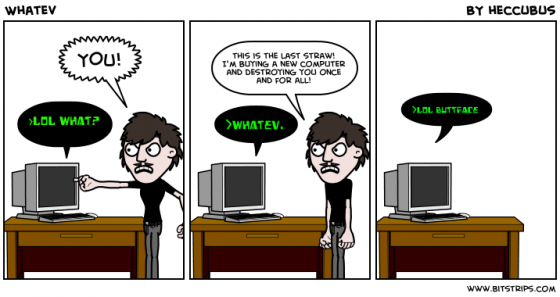 Look, I can dig trying to be less dirty, but still.

As often as you see and hear profanity these days, it seems almost pointless to try to hide it behind clever misspellings. But here we go, regardless. It looks like it ought to be an acronym, DAFUQ. Like maybe Do All Fuckers Usually Quit… as in quit grammar while they’re trying to be cute or clever. Okay, look, I’m not an acronym creator. Let’s just go back to What the Fuck or at the very least, WTF and call it good. Okay? 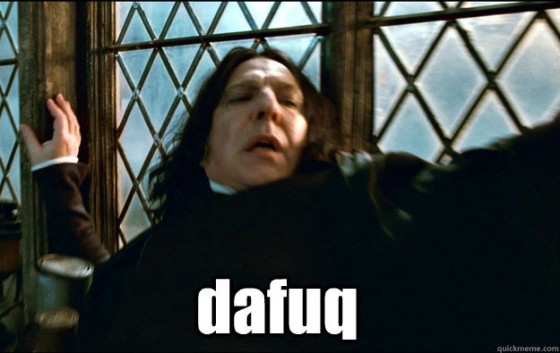 Replace the right letter with the wrong. Good plan.

This one is a whole new level of laziness we have yet to see on this list. Typically the plan is to drop letters and just go with the basic sense of the word you’re attempting to ruin, but in this case we have the ‘A’ being removed and an ‘S’ getting added to the end just to sound… what? Cool? Sassy? Like a colossal ass-bag? Yeah, that sounds bouts right. 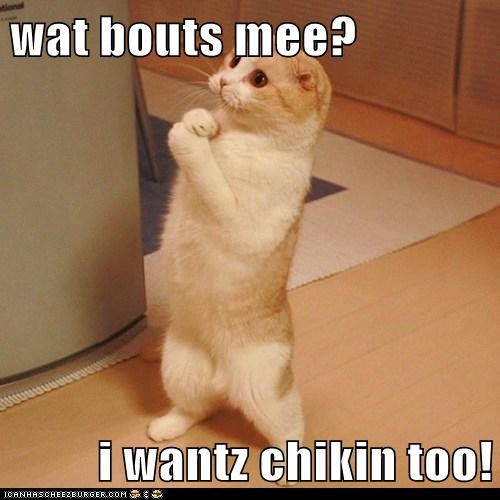 Close, but no cigar.

I’m not entirely sure what’s being conveyed here. Well, other than an exceptional case of sheer dumbassery (yeah, I can invent words, too). You already have the word COOL. It’s not long, hell, even two of the letters are exactly the same! So what’s the point of literally changing every letter but one and making it nearly twice as difficult to type? Is it just to be cute? Did the inventor think COOL didn’t sound like COOL enough so he had to enunciate the ‘EW’? Somebody help me. 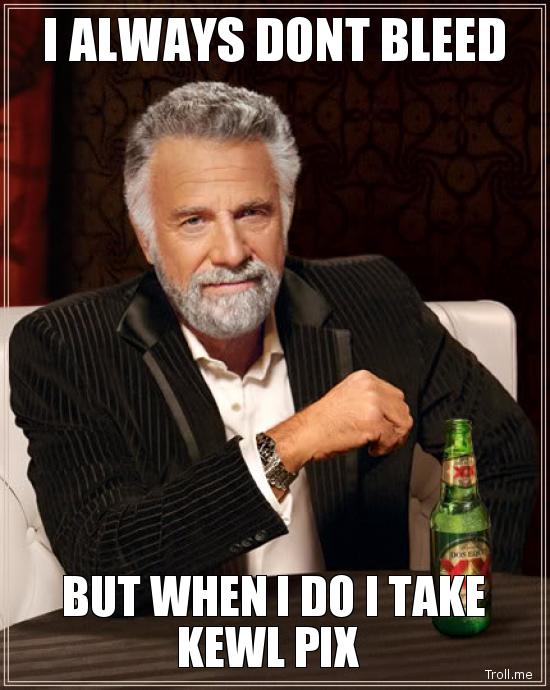 This is so lazy it’s borderline criminal.

Man this one hurts. I know this gets used a lot on TV and in movies when some lazy bastard is trying to sound hip and ‘with it’ and says something ridiculous like, “Man, I GOTSTA git wit dat chick!” It sounds almost just as dumb there as it looks on FaceBook and Twitter… almost. Seeing GOTSTA in type (see? I’ve done it three times already and it’s sickening) is just painful. I know you have no time, I know your life is riddled with zero patience, but come on!

Being a Valley Girl only way lazier somehow.

Remember those? Valley Girls I mean? Yeah, back in the 80’s when those vacuous females from the Valley in California would say asinine things like ‘Gag me with a Spoon’ and ‘Grody’ (They did say that, right?) was quite possibly the downfall of modern grammar usage at its very beginning. Well, here we go again with a word like TOTES to replace TOTALLY, which is already a word that’s far overused in cases it’s TOTES unnecessary. Fer sure. I think I just realized how much I hate this mess. 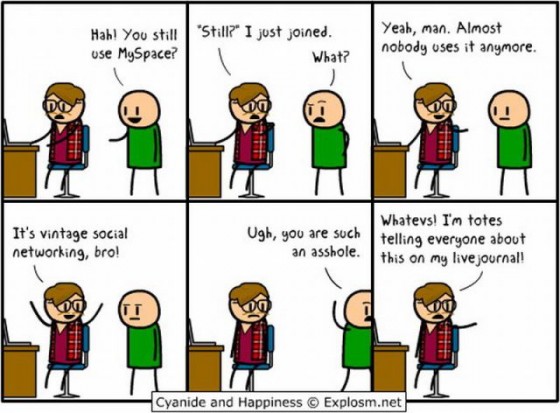 Z’s may be cool looking, but this is stupid.

It must be so hard as it is to use a word like PLEASE in the first place. It’s term of gratitude, at its core (or asking for it, I suppose), and it’s a word used far too infrequently anyway. So when you literally rip the heart out of the word by chopping out the vowels and making the ‘S’ a goofy ‘Z’, you’ve turned a nice word into something rife with 90’s Ultra-Jazzy illness that reeks of pretentiousness and falsehood. Yeah, I made you feel like a loser. PLZ forgive me. 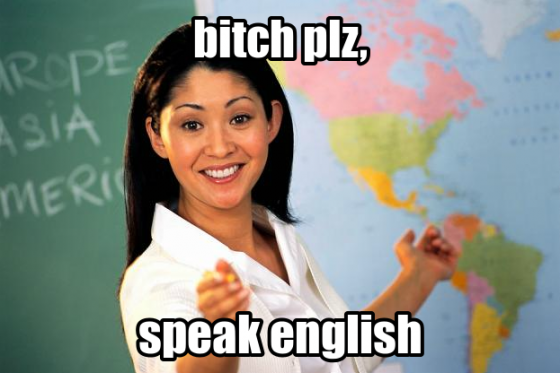 This one kills me the most. Yikes.

I’m blaming this fully and completely on my friend Dana Flanders. Why? Because this is my article and I can, that’s why. This is a super-educated woman with whom I went to high school (granted, it was Paw Paw high school in Paw Paw, Michigan… sounds smart, don’t it?) but as it turns out, the minute she left those hallowed halls in 1992 (the same year as I did), apparently the teachings of grammar sloughed right off like a second skin. I love her like a sister, but the girl has issues when writing on Facebook. Sure, half of what she types is tongue-in-cheek, but I see that as no excuse for using PRY in place of PROBABLY. That’s just downright sad. Ya hear me, Dana? SAD! 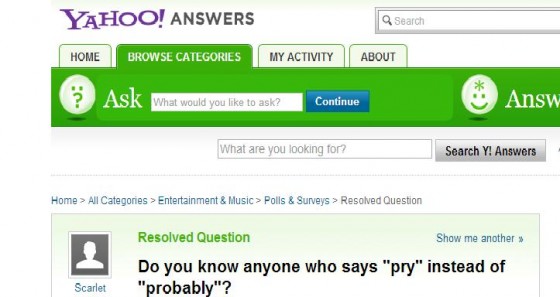