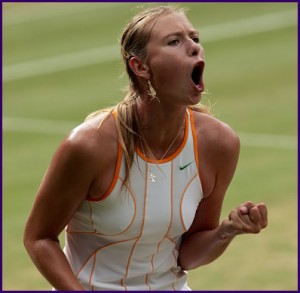 The UK’s DailyMail has the story of how tennis officials are considering a crackdown on female grunts during matches. Anyone who has watched the sport, even if just for the lovely ladies, can attest to the noises emanating from the players. It’s distracting. It’s annoying. And it may be done purely to throw off an opponent. One of the loudest offenders is superstar Maria Sharapova, who at 101 decibels is almost as loud as a lion’s roar. According to Wikipedia, a lion’s roar can be heard from 5 miles away. So how far away can you be to hear Sharapova? But it’s not just her. In last month’s French open, Aravane Rezai complained to the umpire about the noise emitting from 16-year-old raqueteer Michelle Larcher de Brito. Below is a table of the worst offenders:

THE GRUNTERS, IN DECIBELS

The way the International Tennis Federation’s code of conduct reads now, a player can have a point awarded against them if the umpire feels they have hindered an opponent. The new proposal would put an outright ban on emitting too much noise, with grunters facing a forfeit of a game or match.

I say bravo to the ITF and hope they go forward with the changes. It can’t hurt the sport.