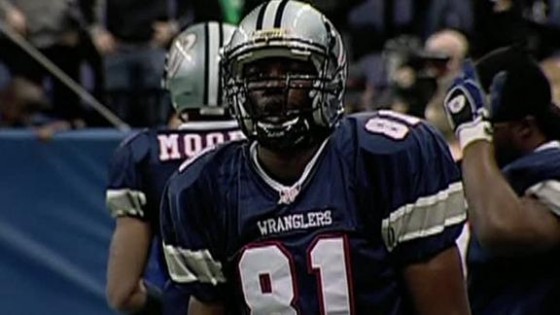 That’s right sports fans, Mr. Me is back, and this time he means business. Indoor Football League business. Everyone’s favorite egomaniacal stud wide receiver, Terrell Owens, now plays for the Allen Wranglers, which sounds more like a canceled CBS western than an actual franchise, but that’s beside the point. In his season debut Friday night, Owens snagged three touchdown grabs, and was ever so humble in his post-game comments.

I’ve always prided myself on being a playmaker, whether it’s (in) this league or the NFL,” Owens told ESPNDallas.com.

A playmaker, not a good teammate. Geesh, it is possible for this guy not to be a self-promoting douche when the cameras roll? Hey, I’ll give him credit for keeping in shape and still wanting to ball, but he’s part owner of the team, so it’s not like this isn’t anything more than a publicity stunt to help his NFL comeback campaign. He doesn’t give two shits about the Wranglers. And he won’t give two shits about whichever pro team foolishly offers him a contract. Once a corrosive personality, always a corrosive personality. Maybe he can take over for Chad Ochocinco by contributing next to nothing in New England’s offense.