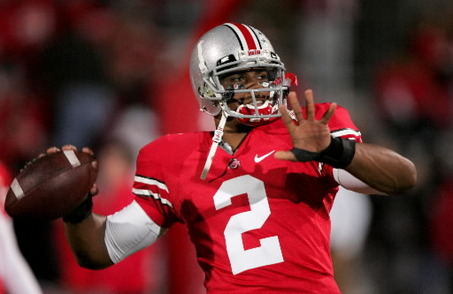 With the NFL still under lock-out mode, former Ohio State Buckeye Terrelle Pryor has made the decision to wait it out for a possible supplemental draft to get drafted into the NFL instead of playing football in Canada.

Pryor’s football future seemingly has been sped up by the recent allegations that he and four former teammates decided to sell some of their Ohio State football memorabilia for tattoos which has him in hot water with the NCAA. Recently, there has been word that he was mulling over a decision to possibly play in the Canadian Football League. However, Pryor has shot down those rumors through his attorney, and will not make the trip up to the Great White North to play for the Saskatchewan Roughriders anytime in the near future. Sure, The Canadian Football League might not be as attractive as it’s American counterpart but I believe that it might have been Pryor’s best decision to play football for this season.

The National Football League is still currently under a lock-out and as much as people want to believe that it will be lifted soon, I’m not chiefly sure that the NFLPA and the NFL will be able to reach an agreement to be able to play a full season of football stateside. So, if that doesn’t happen, Pryor will have to wait to next season to experience the grueling schedule that is the National Football League.

Another issue I have is regarding the supplement draft, there is a distinct possibility that it could not happen and even if is does, Pryor might not get drafted by the team that he wants to. This isn’t free agency but more along the lines of a bidding war for the highest pick but the teams with the worst records hold the higher picks. Does Pryor want to go to Buffalo or Jacksonville?, it’s possible those might be his destination if he enters the supplemental draft.

The other option for Pryor that isn’t the CFL is the United Football League and to be honest, the level of talent isn’t even close to the Canadian Football League. Sure, there are former NFL players playing in the league but most of the players are on the downside of their careers and the schedule doesn’t come close to the NFL in length. The amount of money that Pryor would make in the UFL is lower than what he would make in both the NFL and CFL.

The Canadian Football League has gotten a bad rap around here stateside but the league has churned NFL players in recent memory and best reflects the grueling schedule that NFL players actually have to face. It will give Terrelle Pryor a chance to learn how to read complex defenses with the wide-open style of offense that the league has been known for. Many great quarterbacks have passed through those doors from CFL fame to NFL fame: Doug Flutie, Jeff Garcia, and NFL Hall Of Famer, Warren Moon. They benefitted from playing in the CFL and I think Pryor would as well. Also, I heard they have free health-care and their exchange rate is pretty high.

However, I guess that is a dream deferred at this point and Pryor might be making the right decision in the long run in terms of his NFL future. To think, he might have looked good in that Saskatchewan green, eh?