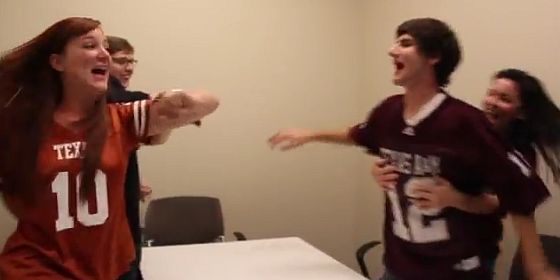 Pity the poor University of Texas. After nearly destroying the Big 12 with their selfish demands and driving long-time rival Texas A&M to the SEC the Longhorns are having a pretty mediocre year. The team is 6-2, and ranked 23rd, but has failed to beat a ranked team so far this season. This weekend the Longhorns face off with #18 Texas Tech, in a game that could have serious ramifications on the Big 12 title. This means, of course, that the timing is perfect for a group of Texas students to start talking trash about former conference rival Texas A&M.

While there are a lot of things we could say about this video, we just have one reaction: Taylor Swift is never appropriate for college football trash talk. A bitchy little song about how an ex can’t get over you is an especially poor choice when it is your school that seems to be unable to move on. Texas A&M seems quite happy with their new situation, ranking 16th and sporting one of the most potent offenses in the country. The fact that Texas can’t shut up about being betrayed (after screwing the rest of the league over) is a level of hypocrisy that even Ms. Swift isn’t guilty of. We aren’t going to mock the Texas reps for the poor singing and direction, that’s to be expected from your average college theater students. We will however question the academic standards of a university that inspired its students to be so stupid.