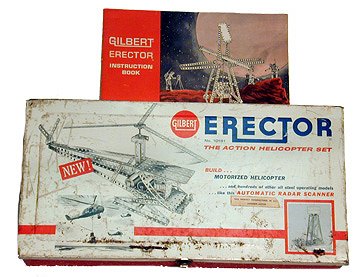 People seem to love nostalgic trips back to our collective childhoods, and one of my all-time favorite toys of days gone by had to be the Erector Set. One of the big ‘packs’ I remember most fondly came with something like 100 pieces of varying sizes and girths and included that really fancy double-ended wrench for attaching the metal lengths together. It had real screws and nuts, every part was shiny and metallic and every piece was as sharp as a razor blade. Seriously! The corners of those things could realistically gouge out an eye! But you know, that was the credo of the toy manufacturers back then: It couldn’t be dangerous enough. Yeah, far too recently has everything gone the way of safer, weaker, shittier, far less weapon-like plastic. Including the good old Erector Set. And man, talk about not running with scissors, don’t run with machete-like wedges of construction toys! I was actually really good at meticulously following the directions and whipping up a crane or a Ferris Wheel, but screw that noise, what I really wanted was to build a sword! And I did. And I hurt myself. So here’s ten really cool Erector sets!

This Guy Talks at Length About His Erector

The 6.5 set is obviously quite old and a bit before my time, but even a decade after this set the toy was still a angle-iron users dream.

It’s glaringly obvious that the newer Erector Sets’ omission of full-metal parts had to be spiced up with bizarrely colored and shaped plastic pieces. Who are they trying to fool?

This commercial features a pretty cool built toy right after the Dragster from the original ad. But it’s pretty apparent that it’s going to take far more than just one set to achieve it. That’s plus-selling, folks.

It occurs to me now why I’ve never got these things for my own kids: they’re excitement value has plummeted since the company gave in to whining parents and their aversion to unsafe toys. Metal trumps plastic any day. Safety be damned.

These humongous parts are well on their way to becoming the World’s Largest Erector Set for the toy’s anniversary.

That Big Erection is Moving!

This is currently the largest moving Erector Set creation built from standard parts once available in regular sets. Impressive, isn’t it?

Sir, Your Erection is Steaming!

This reminds me of that creepy military robot ‘dog’ thing HERE. And, judging by it’s appearance, it’s just about as useful.

Look At That Erection Grow!

Pretty cool stop-motion animation of an Erector Set building itself. The Rubic passenger is a nice touch.

This guy, apparently fed up with button-mashing, invented an Erector Set Machine that does all the work for him. Cool.