The Ten Most Ridiculous Museums 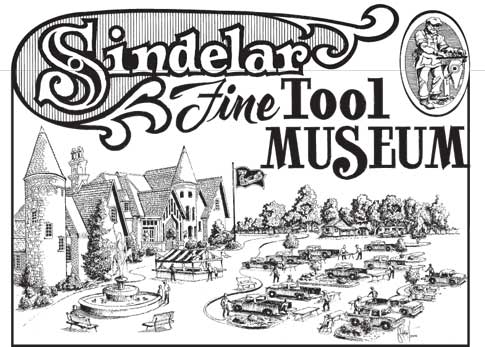 Museums are moving places when they house epic works of art, and they can be educational and awe-inspiring when they teach you about science and the world around you. But sometimes they’re just mind-blowingly fucked up.

Victoria’s Secret is all fine and good with its angels and boobies and warm feelings deep in the pits of our stomachs, but when we want to feel ashamed and slightly frightened, we turned to that stash of pictures we found in our sister’s room Frederick’s of Hollywood. The Frederick’s lingerie museum is an excuse for any creepy perv to stare at not just underwear, but celebrity underwear, without facing those accusing glares or guard dogs that live around Jessica Biel’s house. Though the real Frederick gave the world the push up bra, an item at once awesome yet infuriatingly deceptive, his lingerie museum, located at the back of a store in Los Angeles, merely offers a variety of scary celebrity paraphernalia, such as boxers worn by Tom Hanks in Forrest Gump, an underwire bra signed by Cher and, brace yourselves, a training bra worn by Phyllis Diller. This Phyllis Diller. 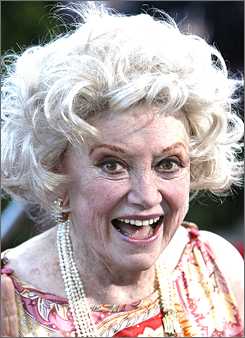 Not pictured: Anything not obscene.

The Museum of Toilets

Studies have shown that the reasons large malls and stadiums and the like have several restrooms is not because of convenience, rather that if there was only one bathroom with enough toilets to accommodate all potential customers, people would never want to leave. Once a room hits toilet critical mass, the human mind reacts as though faced with the very image of God. We simply can’t process it all and are left in rapturous awe. The Sulabh International Museum of Toilets is well aware of this and thus endeavored to satisfy mankind’s otherworldly lust for knowledge of shitters. The website has no less than 5 lofty objectives listed for the existence of the museum and the page dealing with toilet history begins with this intense statement “Unlike body functions like dance, drama and songs, defecation is considered very lowly.” 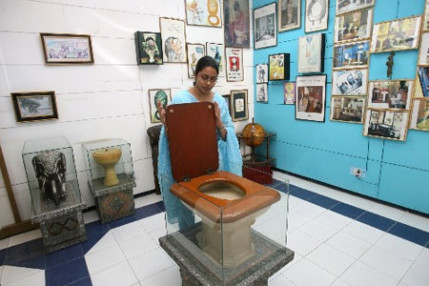 A tribute to the most phallic of all fruits, the Washington Banana museum contains more banana related shit (over 4,000 items) than any sane person should ever have or even know exist that relate to bananas. Posters, photos, ads, toys and godawful artwork all feature bananas. To what end? None at all, except that the curator is dangerously insane and found some bizarre way to quell their madness by putting effort into sharing this with the world. 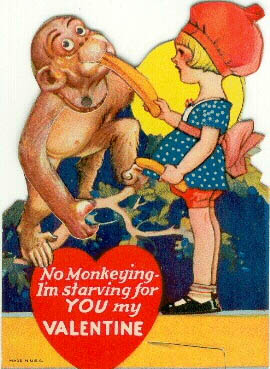 This was considered normal once

Curiously more pathetic than most of these other museums, the Spam museum was not founded by a devoted lunatic who simply has a love for gelatinous, salty, vaguely edible meat-like substances. Instead, Hormel, the makers of Spam, figured their fearsome pork-based creation deserved its own museum and went ahead and made one. Some of the amazing facts you can learn at the museum include how Spam served its country by feeding Allied Forces during WWII, which, read another way, means that when you’re in the trenches being shot at halfway across the world, surrounded by the corpses of your friends, Spam is the only thing your superiors may be able to offer you to keep you alive.

Finally, the idea of learning about anything whatsoever has been successfully removed from the museum concept, thus breaking it from its stodgy image as a place where knowledge of real things is shared with others. No offense to Creationists, but honestly, cut that shit out. At the Creationist museum, located just off I-50 in Fantasyland, you can hear how humans and dinosaurs used to live together at the same time and they were only killed off some time after the Flood. You can also see get all kinds of helpful info on building your own boat large enough to hold a male and female of the two million known species on Earth. Don’t forget to visit the washrooms as rumor has it the urinals turn your whiz into Vanilla Coke but the stalls visit some of the lesser known Biblical plagues upon you, like pubic lice and gloryholes.

Recently, the museum faced some financial hardship and was struck by the Biblical plague of irony as it had to auction off a mastodon skull that the auction house says is about 40,000 years old but, according to the very premise of the museum, can’t be more than 6,000 years old. Take that, faith! 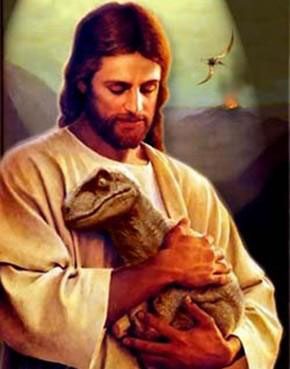 And the Lord said “Thou shalt try to kill Jeff Goldblum”

What is every museum you’ve ever been to missing? Period blood. Don’t argue, it’s the truth. The Louvre has like no period blood anywhere. So how do you get your fix of shit you never ever ever ever ever ever want to see? You go to the Museum of Menstruation and Women’s Health which, naturally, is in some guy’s basement.

The website, a visual atrocity, even features hate mail from people who are horrified the museum exists and want God to shut it down. God gave the curator coronary angioplasty and he elected to close the real world museum but kept the virtual museum up and running until such time as he feels opening the doors again is a viable option

Psychiatry: An Industry of Death Museum

At first glance this has to be an awesome museum as it states its own agenda right in the name. It’s letting you know Dr. Frasier Crane wants you dead. You never see the Museum of Modern Art Made by Nancy Boys or the Museum of Science and Industry Designed to Keep the White Man Down. This museum is clearly a step ahead.

On the other hand, if you follow the bouncing ball back to the source you’ll see this museum was founded by the Church of Scientology, meaning everything inside has been filtered through the brain of Tom Cruise and people who think Battlefield:Earth didn’t suck huge, huge balls.

Like the Creationist museum, the Industry of Death museum relies more on you already agreeing with them and never, ever asking questions than anything that could be mistaken for science or worthwhile knowledge. Basically the point of the museum is to convince you Hitler wants your kids on drugs. It’s all part of the master plan. Thank God a mediocre science fiction writer stumbled upon it in time to save us from anti-depressants! 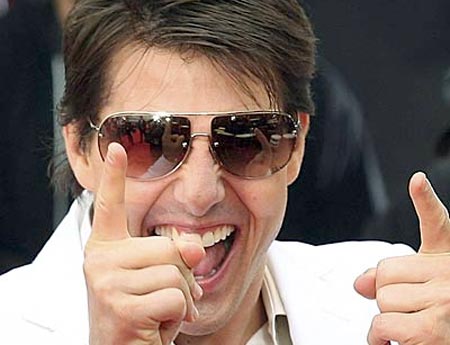 I will jump on your sofa then take you to my home world!

Because far too many uptight museums are all “let’s only display stuff that doesn’t suck,” the Museum of Bad Art exists to defy the norm by giving some appreciation to art that is just rancidly bad.

Surprisingly, the museum has a fairly distinct set of standards that exhibits must meet to qualify for inclusion. They can’t be sucky on purpose, and nothing kitschy is to be included. They want to showcase art made by sincere artists who just failed so miserably that they stand head and shoulders above the rest of the world’s mediocre artwork as something amazingly bad.

So powerful is the godawful collection of shit held at this museum that pieces have actually been stolen. Even offering almost $7 as a reward, the portrait called Eileen was not returned until 10 years later when the thief demanded $5,000. The museum refused and the thief gave the piece of shit back anyway. 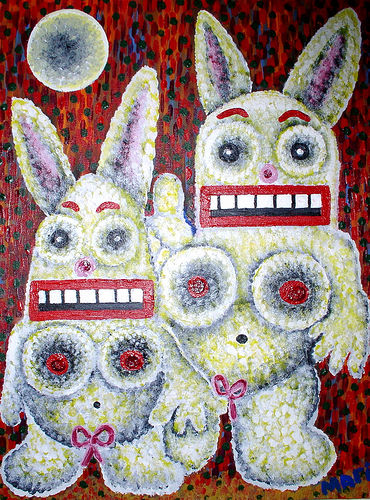 Bunnies with tits? How is this bad?

The merits of the medium aside, the Toilet Seat Art Museum exists and is chock full of toilet seats. Owner and artist Barney Smith is a retired plumber who apparently really found some beauty in his job and felt like taking that into retirement with him. The result is his Texas museum and its hundreds upon hundreds of toilet seats, all decorated by Barney, all lamenting their piss-free existence. 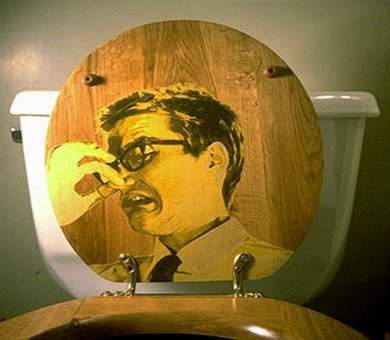 This is basically a museum of Icelandic wang and, contrary to popular belief, is not Paris Hilton. The museum houses over 200 specimens, which means there are over 200 reasons for any man who inexplicably gets trapped in this building to feel uncomfortable. Lest you think you’d get bored by looking at hundreds of dicks, there is some variety present. Some of the units are dried, some are in formaldehyde and some are hunting trophies because what better trophy to take than a penis? The website proudly proclaims that it’s probably the only museum in the world to contain a collection of phallic specimens belonging to all the various types of mammal found in a single country. Who knew de-dicking every animal in you country could lead to such fame?

The museum also has examples of units from things such as elves, trolls and sea monsters. Just because no one has confirmed the Loch Ness monster exists doesn’t mean the curator, a man in his mid 90s, can’t have its dick on his shelf.

Currently there are no human shlongs in the museum, so you’ll have to go to the rest room to get your fill if you’re really hankering to see one. However, they do have 4 “legally-certified gift tokens” for human specimens, to be collected when the owners no longer need them. 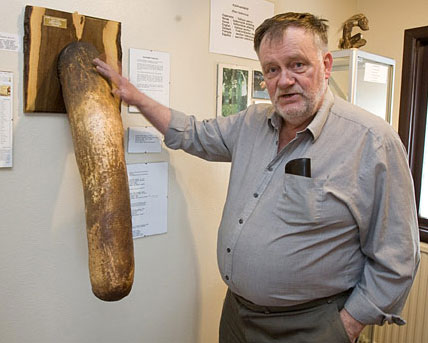 Just try to imagine how much ass this guy gets