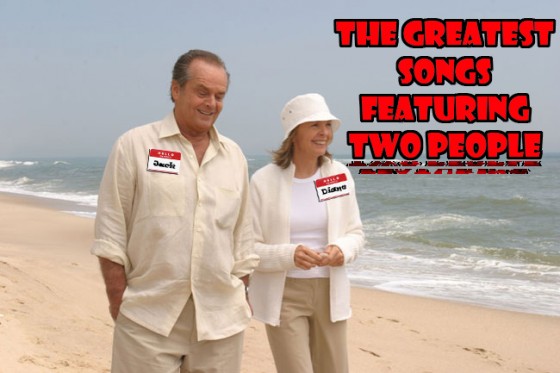 What? No, really! All of these songs have stories about or pertain directly to Two People! No more, no less. (Okay, I lied. In one specific case, there are three. Stay tuned.) Two, oddly, has become a comfortable zone around which many songs revolve. You can feel good about a solid pairing of folks you could ultimately relate to. A couple signifies unity; possibly a bond about which we’re quite familiar with such as marriage or friendship. And now, before I completely run out of inappropriate prepositional sentences, let’s take a look and a listen to a few tunes where Two People are the main focus. Oh, and if you want to hear a Podcast on which (there I go again) we discuss at length many songs that we whittled down to fit this list, check this out: The Gunaxin Show.

Me and My Bitch
Notorious B.I.G.

The Players: ‘Me’ (presumably Biggie) and ‘My Bitch’ (his girl).
Lyrical bit: When I met you I admit my first thoughts was to trick
You look so good huh, I suck on your daddy’s dick (yeah)
I never felt that way in my life
It didn’t take long before I made you my wife

Lily, Rosemary and the Jack of Hearts
Bob Dylan

The Players: Lily (a princess), Rosemary (a queen without a crown), and Jack (the leader of a gang of bank robbers).
Lyrical Bit: Backstage the girls were playin’ five-card stud by the stairs
Lily had two queens, she was hopin’ for a third to match her pair
Outside the streets were fillin’ up, the window was open wide
A gentle breeze was blowin’, you could feel it from inside
Lily called another bet and drew up the Jack of Hearts

The Players: Zak (trying to make it) and Sara (trying to kill everyone).
Lyrical Bit: Sara spelled without an ‘h’ was getting bored
On a Peavea amp in 1984
While Zak without a ‘c’ tried out some new guitars
Playing Sara-with-no-h’s favorite song

You Never Can Tell
Chuck Berry

The Players: A fictional and nameless couple and their lives after the wedding: “Pierre” and the Mademoiselle.
Lyrical Bit: They bought a souped-up jitney, ’twas a cherry red ’53,
They drove it down to Orleans to celebrate the anniversary
It was there that Pierre was married to the lovely mademoiselle
“C’est la vie”, say the old folks, it goes to show you never can tell

I Shot the Sheriff
Bob Marley

The Ballad of John and Yoko
The Beatles

The Players: John Lennon and Yoko Ono.
Lyrical Bit: Drove from Paris to the Amsterdam Hilton,
Talking in our beds for a week.
The newspaper said, “Say what you doing in bed?”
I said, “We’re only trying to get us some peace”.

Tangled up in Blue
Bob Dylan

The Players: She (the lost love) and I (the narrator, Dylan himself).
Lyrical Bit: She was married when we first met
Soon to be divorced
I helped her out of a jam, I guess,
But I used a little too much force.
We drove that car as far as we could
Abandoned it out west
Split up on a dark sad night
Both agreeing it was best.
She turned around to look at me
As I was walkin’ away
I heard her say over my shoulder,
“we’ll meet again someday on the avenue,”
Tangled up in blue.

The Players: Brenda (prom queen) and Eddie (the king).
Lyrical Bit: Brenda and Eddie were still going steady in the summer of ’75
When they decided the marriage would be at the end of July
Everyone said they were crazy
“Brenda you know that you’re much too lazy
and Eddie could never afford to live that kind of life.”
Oh, but there we were wavin’ Brenda and Eddie goodbye.

Me and Julio Down by the School Yard
Paul Simon

Me and Bobby McGee
Janis Jopplin

The Players: Me (depends on who the singer is) and Bobby (written originally as a woman for Roger Miller’s performance). There is a ton going on in this song. Check out the Wiki entry for more info.
Lyrical Bit: Freedom is just another word for nothing left to lose,
Nothing don’t mean nothing honey if it ain’t free.
Yeah, an’ feeling good was easy, Lord, when he sang the blues,
You know feeling good was good enough for me, hmm mm,
Good enough for me and my Bobby McGee.

The Players: Billy Joe and Bobby Sue (bored would-be criminals).
Lyrical Bit: This here’s a story about Billy Joe and Bobbie Sue
Two young lovers with nothin’ better to do
Than sit around the house, get high, and watch the tube
And here is what happened when they decided to cut loose

Livin’ on a Prayer
Bon Jovi

The Players: Tommy (used to work on the docks, but he’s currently on strike) and Gina (working at a diner all day).
Lyrical Bit: Tommy’s got his six string in hock
Now he’s holding in what he used to make it talk
So tough, mmm, it’s tough
Gina dreams of running away
When she cries in the night, Tommy whispers
“Baby it’s okay, someday”

The Players: Jack (potential MVP for the NFL) and Diane (not opposed to givin’ it up).
Lyrical Bit: A little ditty ’bout Jack & Diane –
Two American kids growing up in the heartland.
Jacky gonna be a football star
Diane debutante in the back seat of Jacky’s car.
Suckin’ on chili dog outside the Tastee Freez
Diane sitting on Jacky’s lap got his hands between her knees.
Jacky say “hey Diane, let’s run off behind a shady tree
Dribble off those bobby brooks
let me do what I please” saying:
Oh yeah – life goes on…