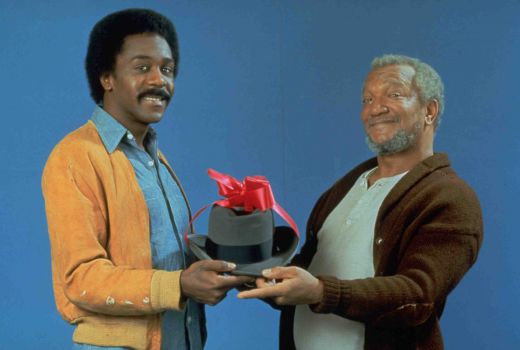 Everyone knows that, often times, the best thing -or at least the most memorable- about some TV shows is the theme song! Think about The Greatest American Hero, for instance. Other than Captain Whats-His-Name being a bumbling idiot who never quite figured out his powers, do you really remember anything else about it? Nothing except for the theme song. Exactly. That song was so good it even charted on a place normally reserved for actual songs! Anyway, the point I’m trying to make is, if you really want to create a TV show that will forever stick in fan’s minds, well, make a damn good show. But if you can’t do that well, then make one with a kick ass theme! And if you can, make it Funky! The guys who made these 20 shows did just that… and hell, I even remember most of them as actually being decent shows to boot! Now that’s quality! Relive the funk, my brothers and sisters!

Karl Malden and Michael Douglas? Yep. Hard to go wrong with that combo.

When you put Robert Blake as a chameleon-like hard-hitting cop behind this slick theme, you have a series that lasts 3 years. Oh well.

This from Wiki: “The series is most famous for its fast tempo theme song which became a number one hit single in 1976 for Rhythm Heritage.” See? I told you.

Here we have one of TV’s most amazing shows. And it was made all the better with Freddie Prinze who, unfortunately, was quite suicidal… but not before he made Freddie Prinze, Jr. Wonderful.

Though not really a ‘Funky’ tune in the definitive sense, the heavy bass guitar and its Surfer style is damn close enough.

Take two wise-cracking black kids (one of which as to be either Gary Coleman or Emanuelle Lewis), slap them together with a starch-white, uppity family and you’ve got Sit-Com Heaven!

Private Eye drama, baby. Ya know, back when P.I. shows were all the rage. Sick tune, though.

Only the first season of this TV staple really had the Funky theme. After that, some bizarre shit went down.

Fred Barry as the eponymous Rerun? And a killer opening theme? Yes. Please.

Ever wondered what the 5-0 stood for? It was created for the fictional police force in honor of the ’50th’ state! Now ya know!

Yes, David Soul sang, ‘Don’t Give Up On Us, Baby’. And it was awful. Luckily this theme song is pretty cool.

This show could just have easily been called, “Tom Selleck’s Mustache Rides”, just as long as they kept the killer theme.

Richard Roundtree was a bad mother f… well you know the rest.

Oh Jan Hammer, only you could take all the pastel majesty and buddy-cop hilarity and smoosh it into a beautiful theme song.

Who is more funky than Fat Albert and the Junkyard Band? Apparently three more on our list…

If your show stars Redd Foxx, you literally need nothing more. Well, maybe a juicy theme, but that’s about it.

Nope, Abe Vigoda wasn’t dead then, either. It was literally a toss up between this and the number one spot. But, well, this is how it worked out.

This is it folks, without a doubt the single funkiest TV theme ever conceived. And, it was a cool show with a great cast. But it will aways stay in my mind as having the coolest tune.