Humor > Pop Culture > The 2010 List Of The Wealthiest Cartoon Characters

We’ve all at one time or another (often while fully absorbed in a particular cartoon) asked ourselves, “Man, I wonder just how much scratch that dude has?” It seems cartoon characters and comic book folks seem to have vast and endless supplies of cash just lying around somewhere that they can and do use to support whatever it is that they do. Sometimes this is true. Take for example Velma from Scooby-Doo. Her dad is pretty wealthy and has, apparently supplied the adolescent mystery solvers with their eponymous van and whatever green they need to assist them. However, on the other side of the proverbial coin, Peter Parker had to fashion his own costume and build his own web-shooters from things he already had or out of bits from the chem lab he frequented at college. He’s pretty damn broke all in all. So who are the richest cats out there? Well, lists over the past few years have been marginally different and featured some pretty well known characters as well as some obscure ones. And, for this year’s nominees, a few faces return as their liquid assets and business holdings haven’t really changed, while still a few new faces have stepped up proving their savings have caught the attention of a couple of curious people. So, all that being said: check out the ten wealthiest fictional characters for 2010.

In the future -well, in a future, at any rate- the world has been overrun to a large extent by robots. Most are pretty helpful when they’re not dreaming about destroying every last human on Earth. Luckily (I guess), robots have been refurbished by Mom, the chief share holder (99.7%, in fact) of MomCorp, a snarky old bat who, for all intents and purposes, is as cruel and snidely as one can possibly get, all the while dressing in the guise of a sweet (think Paula Dean) Southern Belle. But at her heart: pure cold. Cold as metal, one might say.

Eugene H. Krabs is the owner of Bikini Bottom’s premiere eatery, The Krusty Krab. Under his employ are the sullen and morose Squidward, and the ridiculously outgoing and slightly insane titular character, SpongeBob. As with every other member of Bikini Bottom (save for Sandy the squirrel) Mr. Krabs is a marine animal, specifically a crab, who just happens to have a likely-adopted daughter; Pearl the sperm whale. Anyway, Krabs is a skinflint of the highest order and has basically turned money into something almost alive; always doing all he can to either save it or locate it. Let’s just say he’d rather see his daughter wearing old rubber fisherman’s boots than the latest fashion.

Daddy Warbucks (Annie)
Net Worth – Between 27 and 36 Billion

Lieutenant General Oliver ‘Daddy’ Warbucks is the adoptive father of Little Orphan Annie. He earned his wealth the old fashioned way: hard work and perseverance, as well as a little assistance from family money wisely invested after the passing of his parents. He eventually grew to mob-nob and rub shoulders with the elite in both government and Hollywood even going so far as to become very close friends wit FDR. It is not known, though assumed, that Warbucks played more than just a sideline roll in the election of Roosevelt.

Ozymandias (Watchmen)
Net Worth – Between 5.4 and 50 Billion

Adrian Veidt is a sycophantic madman who just also happens to be a genius with a lopsided moral view on the world. Veidt is believed to be the smartest man on the planet, even capable of outsmarting Dr. Manhattan. His combination of intelligence and highly advanced fighting skills makes him perhaps the most feared and dangerous of the mortal Crimebusters. He was even able to catch a bullet fired at him. Looking down on and scorning humanity is what Veidt does best.

Carter Pewterschmidt (Family Guy)
Net Worth – Between 10 and 50 Billion 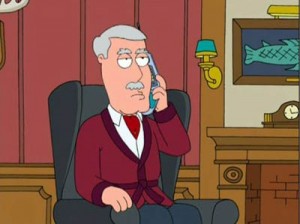 From Wikipedia: “Billionaire industrialist, shipping mogul, and owner of U.S. Steel with investments in the timber industry (though he later loses this and becomes owner of CNN and TNT, though this is contradicted in “420”). His company in the episode Business Guy is named Pewterschmidt Industry, and he is also a member of a yacht club. He is shown to be friends with other powerful people such as Michael Eisner and Bill Gates.”

Anthony Stark is a billionaire industrialist and a sarcastic but personable Playboy through and through. Unfortunately, he has a heart issue that, at one time could have resulted in his death. At one time, Stark was kidnapped and held as a prisoner while his captors demanded he create a super-powerful weapon. With Stark’s health fading, he instead fashioned a nuclear mechanism for his heart and an entire suit of armor to go wit it. He subsequently escaped and went on to become the hero, Iron Man that we all know today. With unlimited wealth and a seemingly bottomless checkbook, Stark is able to not only rebuild his multi-million dollar suit as he sees fit, but also run Stark Industries.

Bruce Wayne (Batman)
Net Worth – Between 20 and 50 Billion

Some say that the Batman is actually the persona, while Bruce Wayne is the alter ego. However you look at it, Wayne has every means to his eventual and inevitable end: Batman. Though Wayne Enterprises is technically largely a private institution, Bruce has given to many charities and the like throughout Gotham City. But where did this bottomless fortune come from? Wayne’s parents were very savvy investors and bought up a bunch of land long before Gotham became a bustling Metropolis, and when they were killed, Bruce inherited the money. Fortunately for him this was the case, as Batman’s many incarnations and ‘rebuilds’ cost quite a bit.

Richie Rich is lucky enough to be referred to as ‘The World’s Richest Kid’. He’s an only child living with a pair of incredibly wealthy parents in a huge mansion in Richville – leading one to assume that they might actually own the town, too. It is said that Richie owns two of everything that money can conceivably buy just in case one breaks. Even though he is portrayed as one who might be slightly standoffish and jerky, Richie is, in fact, very charitable and kind. 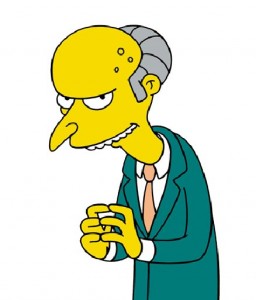 From Wikipedia: “Although originally conceived as a one-dimensional, recurring villain who might occasionally enter the Simpsons’ lives and wreak some sort of havoc, C. Montgomery Burns’ popularity has led to his repeated inclusion in episodes. He is a caricature of Corporate America in his unquenchable desire to increase his own wealth and power, inability to remember his employees’ names (including Homer’s, despite frequent interactions) and lack of concern for their safety and well-being. Reflecting his extreme age, Burns is given to expressing dated humor, making references to pre-1950 popular culture, and aspiring to apply obsolete technology to everyday life.”

I could go into a background here, but who really cares when the simple fact is: He SWIMS in his money. Swims.