Motors > Trucks > The 2019 Ford Ranger is now an International Truck

The 2019 Ford Ranger is now an International Truck 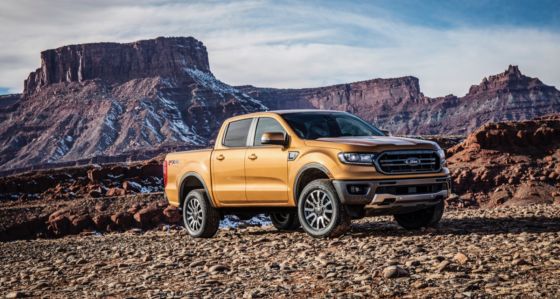 About ten years ago, Ford pulled the Ranger midsized pickup truck from the American market. That departure did not mean that the Ranger was no longer being made, only that it wasn’t being American made. Instead, development of the truck continued in Australia with manufacturing happening in the Southern hemisphere.

For the 2019 model year, though, Ford felt it was time to re-enter the North American market with the Ranger. The Ranger being sold here is nearly identical to the global truck with the exception of its powertrain. Being an international rig now, the 2019 Ford Ranger has a few points that aren’t on par with what Americans might expect from a small pickup truck. It’s also got a lot of high points. 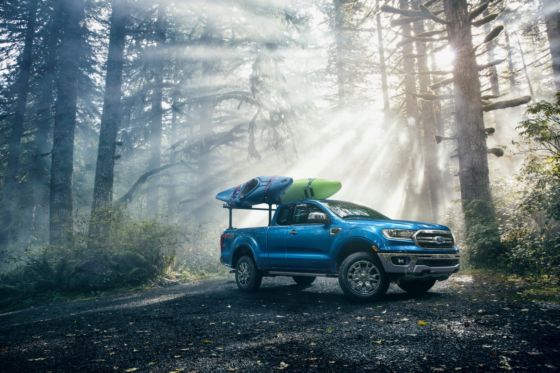 Ford wisely decided not to “beef up” the Ranger for us Americans. The Ranger is more contemporary and styled the same as the trucks being sold in Australia and South America. The front fascia, hood, and bodywork are very similar to many of Ford’s current crossover-SUVs. Especially the Ford Edge. Those noting that will also see the Edge in the Ranger’s interior switchgear and design as well.

That’s not an accident, of course, as non-American audiences aren’t interested in or used to the blockiness and muscularity of a pickup truck. Many midsized trucks, even in our market here, are no longer sharing gear and design cues with their larger full-sized counterparts. The General Motors twins and Honda Ridgeline are good examples of that sort of non-compliance working well. 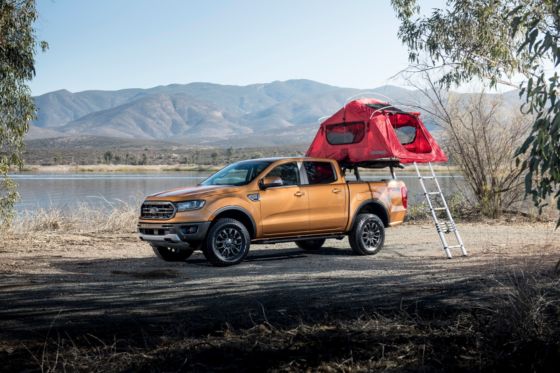 The 2019 Ford Ranger has a lot of strength in its looks, though, mixing the crossover styling with pickup truck capability. The utility is clear to anyone looking and the FX4 off-road package adds some wheel clearance and beefiness for those who’d want that. 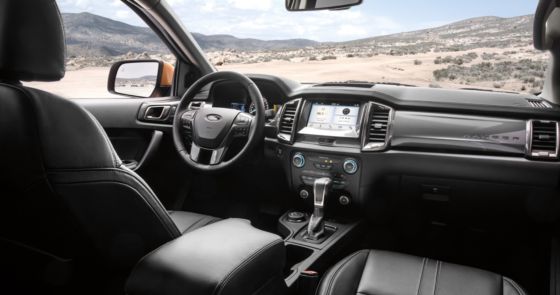 Inside, however, the Ranger does need some improvement in some areas. The rear seats in the crew cab do not lift or move to make carrying large items easier. Underseat storage in the back is also next to non-existent. The front seating is very car-like, as would be found in a crossover like the Edge, and thus doesn’t hold the driver or front passenger in place very well. Especially with the vinyl or leather(ish) option. Off the road, that’s not a good thing and sliding around becomes the norm. Leg aches from planting the left foot on the dead pedal and hanging on for the ride become the rule of the day. 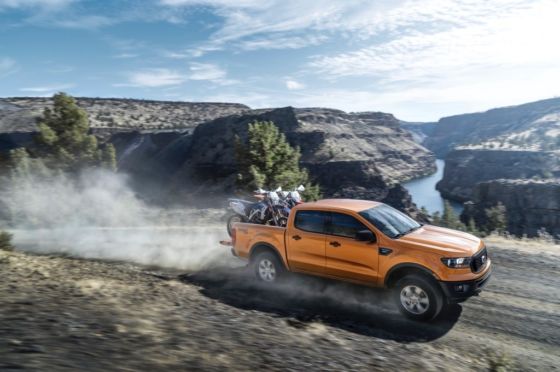 The 2019 Ford Ranger has a lot of utility. It comes standard with the lack of tie-down options we’ve come to expect from Ford, but there are plenty of customizable options through the dealer that will make sense for whatever your plans might be. The Ranger’s bed is sized just right for toys like motorcycles and ATVs. 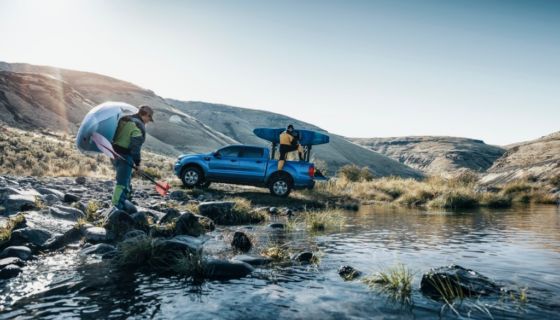 Off-road gear in the FX4 package is pretty good in the Ranger. It won’t outperform serious off-pavement rigs with names like Rubicon or TRD on them, but it’s commensurate with what’s expected of a standard 4×4 pickup truck. Better than that, though, it’s generally smoother and the 4WD system in the Ranger is good at finding grip in medium-tough trail situations.

A few things we don’t like about the Ranger are its lack of dampening for the tailgate, which clunks down loudly, and the turbocharged engine’s jerkiness while pulling a trailer or bouncing around off the pavement. Once the driver learns to control the throttle in a way unique to this truck, though, acceleration smooths itself out. 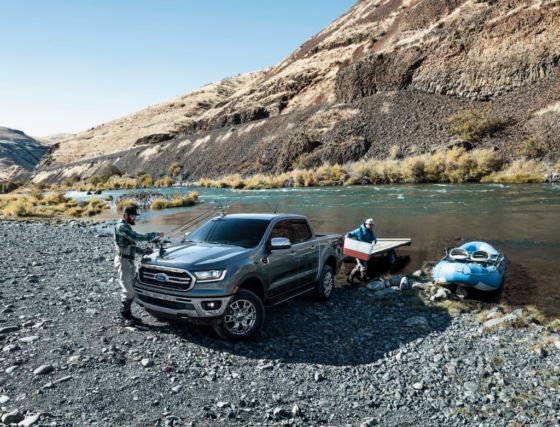 For the 2019 model year, the only engine available in the Ranger is a 2.3-liter turbocharged four-cylinder. This engine isn’t new, it’s being used in some other Ford products as well. And to good effect. In the Ranger, it’s tuned to deliver muscle for towing as well as get-around power. It outputs 270 horsepower and 310 pound-feet of torque at peaks, which come relatively early thanks to the turbo. The ten-speed automatic transmission that’s become ubiquitous in the Ford lineup is also in the Ranger. 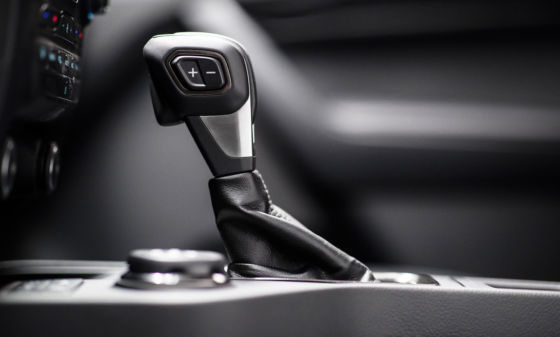 The combination is a great one for the 2019 Ranger. The engine outputs good power for the size of the rig while the transmission translates that into useful get-around capability and great fuel economy. The two-wheel-drive Ranger is EPA-rated at 26 mpg on the highway and 21 mpg in the city. We beat both of those numbers in a 4×4 model. That’s saying something there.

It’s odd that Ford is only offering the Ranger with one powertrain, but we suspect that’s only temporary. Rumors for other options include a possible diesel as well as a bigger turbo-four. The Ranger has now been on the market long enough that aftermarket tuners and equipment companies have begun having a field day with it too.

Getting Out There With the 2019 Ranger

Going out on the road with the Ranger is comfortable and gives no surprises. The Ranger is very good on the road and a strong puller when towing. It’s also great for around town driving with a lot of visibility for the driver and good maneuverability. 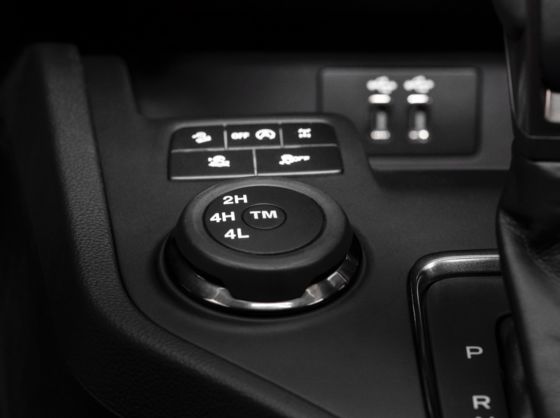 Off the road, the Ranger gets a bit more hinky. It takes some time to get used to the throttle and blippy engine response and the not well-thought-out seating is a downer. Most off-road tasks are fun, though, and the 2019 Ranger with the FX4 package feels confident doing most things. It’s easy to know where the edges of the truck are when looking out the window or into the mirror while maneuvering and clearances and capabilities are straight-forward for anyone familiar with off-pavement activities.

The 2019 Ford Ranger is a good pickup for the midsize segment. It offers something that hitherto has only been found in the Honda Ridgeline: a more car-like small pickup truck. And it does so without losing its truck identity. That’s a market need that Ford is smart to fill. The Ranger’s starting price is $24,300 plus delivery.