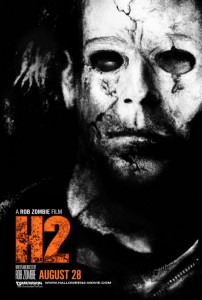 With the Fall season rapidly approaching, and the Horror Movie Season starting tomorrow with Rob Zombie’s Halloween 2, I thought this a perfect time to take a look at one of the most prolific, collectible, and shocking pieces of media that always goes hand in hand with the films themselves: Movie Posters. And in no film genre are the posters more abundant and often strikingly beautiful, while at the same time ferociously chilling, than Horror. When a company wants to one-up either themselves or the last company’s artistic attempt to scare someone, they roll out the most hideous and unrelenting pieces of art imaginable. But there are limits, at least to what you’re able to show the pubic in theaters. But that doesn’t mean envelopes can’t be pushed. And then there’s the entirely different and equally as spine-tingling pictures that accompany DVD releases. It can get pretty brutal and spectacular all at once. So if you’re a huge horror movie buff like I am and really relish in the nasty, brutal, visceral artwork that goes into making a movie poster, you’re gonna love these. 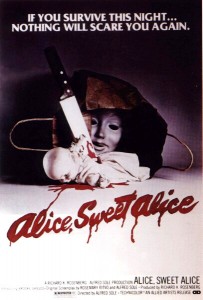 I think what shocks the most about this poster is both the butcher knife in the baby doll’s back, and the empty-eyed mask at the bottom of the grocery bag. It just screams slasher film, and the film itself is pretty damn brutal, too. 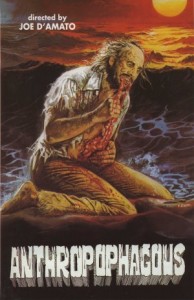 This movie is absolutely revolting in a couple of parts. Perhaps it might do you well to look up the word. I’ll wait. There ya go, basically a cannibal. So, in the final scene (I’ll spare you the description of the first), the beast is dispatched with an ax, but before he succumbs to death, he tries to eat himself. That’s the image you get here on the poster. 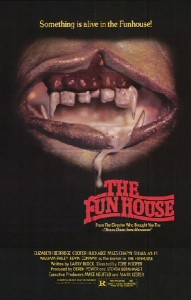 This poster appears on a lot of ‘Best-Of’s’ pretty much for the same reason: a demonic monster with a wicked hair-lip, disgusting teeth, and a rivulet of discolored drool. It’s enough to make you turn away. 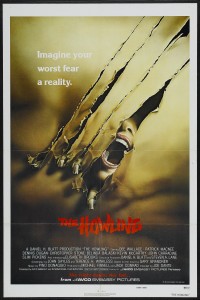 As werewolf movies go (and they do go… ), the Howling is easily one of the best. The poster is rife with horrific imagery, especially the ripped (flesh?) background hiding the screaming woman. Very nice. 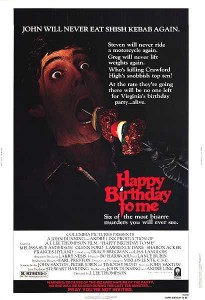 Boy, 1981 was a good year for Horror!. Anyway, this one stars everyone’s favorite blind Ingalls from Little House on the Prairie as a bat-shit crazy chick bent on revenge. And boy is the revenge sweet. The scene where they’re all sitting, dead, at the dinner table is just classic. In the poster we see but one way a victim is dispatched. 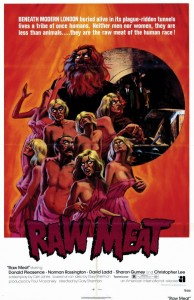 Though the poster is supposed to illustrate the beasts that live beneath the London city streets, it almost ends up coming across as a zombified version of Moses and his monstrous disciples. Maybe that was the point. Either way: pretty creepy. 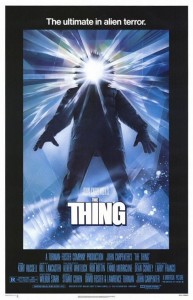 Though not standard to its horror film genre, the scenes in which we actually see the alien transforming the dogs and the scientists into malformed monstrocities are stunning. On the poster, just the idea of that bright flash of light becoming something only found in nightmares is very intriguing. 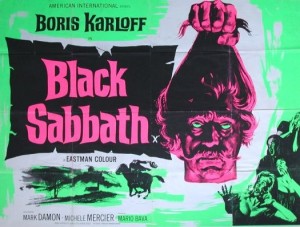 Wonderfully artistic and pop-style for the early 60’s, it almost sits as a sign of the times -especially considering movie posters from those few years all share the same basic idea. Though this one, as a horror movie, has the added benefit of a severed, angry, head. 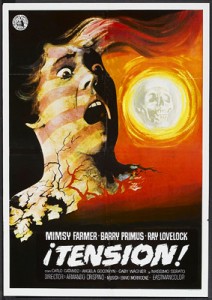 The artwork in this poster does a great job of using it’s harsh color scheme to represent the torment and reached breaking point in the woman’s psyche. Look closely at the moon… 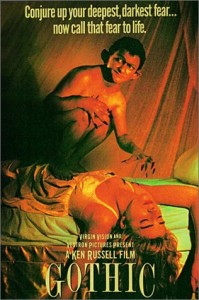 Though the movie retells the historic tale of the eponymous creation of Shelley’s Frankenstein as well as the Vampire mythology, it’s the poster that conjures up the most disturbing image. A Hell-spawn imp perches curiously on a sleeping woman. 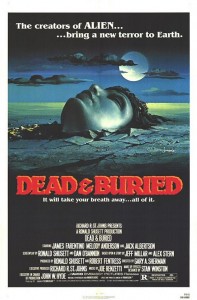 I have two incurable fears, both of which play strongly in ways I’d rather not shuffle this mortal coil. Drowning is one, and the other is somehow getting buried alive. Now you can see why this poster is so damn freaky. 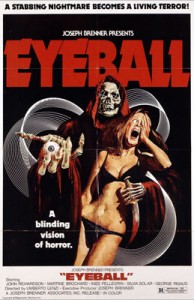 Not exactly the best movie of all time, but for what it lacks in cinematic brilliance, it more than makes up for with its ridiculously gory poster. 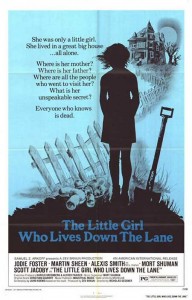 The girl being eluded to in the title is none other than Jodie Foster. So, in the silhouette there on the poster, we get something of a question as to what it is she wants and who she really is. Scary, that’s what. 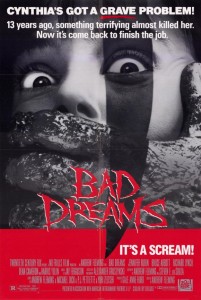 It’s hard to scream when you’re in a coma. It’s even more difficult to scream when you wake and begin having visions of a suicidal cult leader. Yeah, much like the burnt remains of the hand that mutes her on the poster. 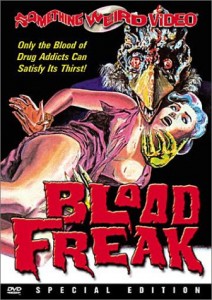 If you’ve ever wanted to see a movie where a duo of remarkably unintelligent turkey-farmer scientists actually become the very bird they work on, well, you’ve come to the right place. Actually, maybe you ought to leave. The poster is easily the best part. 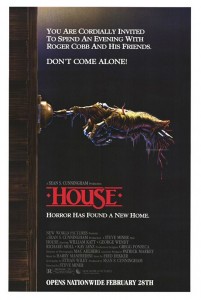 An absolute Who’s Who of ’80’s sitcom stars (William Katt, George Wendt, and Richard Moll) make this movie one of the funniest horror-comedies ever. And the poster? Dude, it’s a disembodied hand ringing a doorbell! What more do you want? 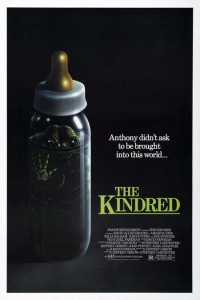 Sometimes simplicity is the name of the game. What could possibly be more innocuous and ordinary than a plain old baby bottle? Likely nothing. But what if the bottle had a hideous, sinister creature in it? What then… 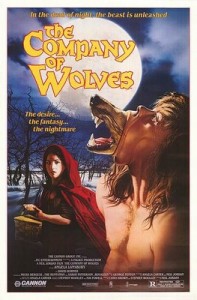 More or less a retelling of the Red Riding Hood myth by none other than Angela Landsbury, its not the movie that moves most. No, it’s the visage of a wolf snout -and presumably the rest of the canine- attempting to squeeze through a person’s mouth. Amazing piece of artwork. 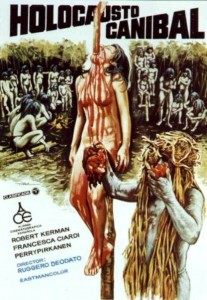 When Ruggero Deodato’s gory, nauseating film originally saw release, he was brought into a lawsuit where he had to prove that no one (especially the girl skewered on the poster here) was actually killed by bringing the actor into court. It is a painful film to witness. 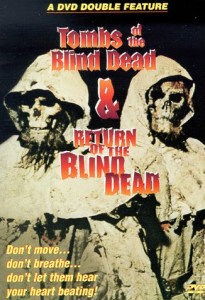 This movie is really disturbing. Not especially gory at all, but just the prospect of those Blind Dead horsemen you see on the poster hunting their hapless victims by sound alone is just so very creepy. See this movie. 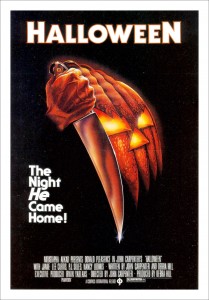 If you haven’t seen the original and far, far superior Halloween from John Carpenter, well, you are really missing out. On the poster, the only thing that belays the otherwise spooky innocence of a jack o’ lantern is Michael’s butcher knife. Classic. 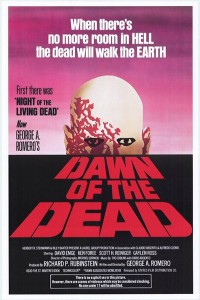 “When there’s no more room in Hell, the dead will walk the Earth.” Now there’s a tag-line if I’ve ever read one. Basically just a head peeking out of the ground with nasty red scars laced across it. Gruesome and perfect. 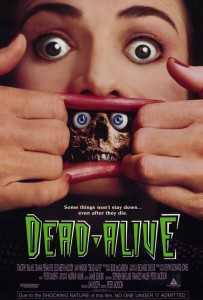 The Lord of the Rings trilogy notwithstanding, I firmly believe Peter Jackson should have stayed on making more movies like this. Absolutely one of my favorites with a poster that just draws you in to its gory carnival ride. 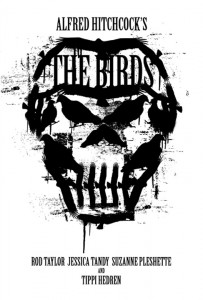 Easily one of the Master’s, Alfred Hitchcock’s, finest works. The movie itself has a slew of posters but I found this one, of birds forming a human skull, to be particularly unnerving. PS: I’ve gotten some questions as to where this poster came from, and as it turns out it’s a Fan-Made poster done by Jeff Ammons. Nice job! 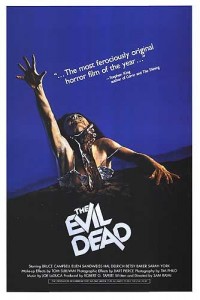 Quite possibly the most blatant, in your face, dirty, hellish Horror Movie poster of all time. It speaks volumes with it’s images alone, though never once gleaning to the treasures you’ll find in the film itself. A masterpiece in poster making.