Grub > Food > The 30 Greatest Kids’ Cereals of All Time

The 30 Greatest Kids’ Cereals of All Time 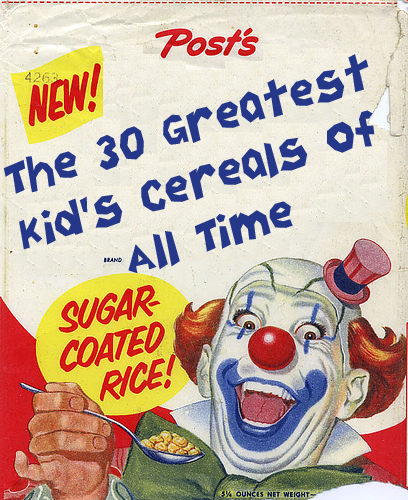 Being a kid and enjoying a great box of cereal is just about as perfect a combination as it comes. I grew up, essentially, in the late seventies and early eighties and my childhood was inundated with different cereal types of every kind. I was lucky enough to pretty much get whichever cereal I wanted so I know and have tasted each and every one of these greats. Now this list consists of not just thirty of the best kids’ cereals, but mainstays. These boxes have adorned shelves for years and show no sign of leaving us any time soon -with a few notable exceptions. I did not, conversely, include any themed cereal that came and went with the fad it represented, so don’t go looking for Smurf-Berry Crunch or Mr. T cereal… they’re not here. However, the list is vast and I have no doubt you will recognize a favorite of your own. 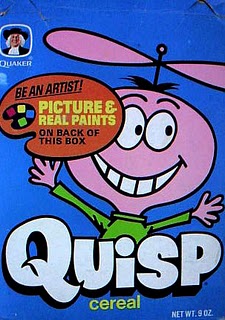 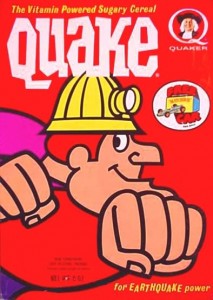 If you’ve never had Quisp or Quake, it’s not only hard to really describe the flavors, but also: shame on you! Regardless of the fact that it has been around for decades, it still sits on the breakfast shelves proudly -well, Quisp is at any rate- and, just so you know, it tastes a bit like Cap’n Crunch lite. Really 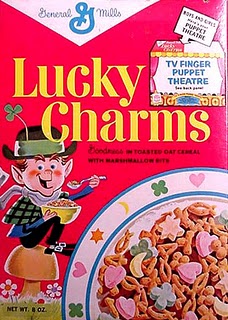 Ah, the cereal endorsed by a Leprechaun. So magically delicious and chock-full of ‘mallow-bits’ and those little charm-shaped pieces that are somehow better for you than the rest. Pretty darn tasty until the whole sugary mass gets soggy and literally turns into bathroom grout. 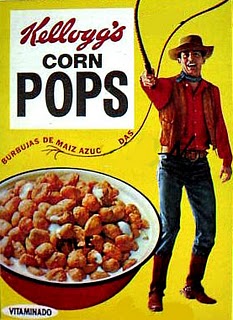 Much like eating a big bowl of sweetened popcorn, Corn Pops were one of those cereals that masked the fact that they were literally buried in sugar. Oh sure, sugar might not have been the first or even the second item on the ingredient list, but corn syrup sure was. Oh, and by the way, that’s sugar. 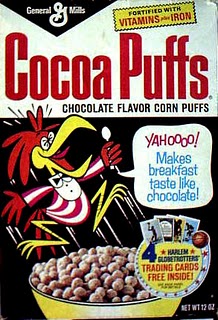 So let’s take these chocolaty balls, pour them into a bowl, add the semi-healthy milk, and turn the whole deal into dessert just like that. Your milk would go from stark-white to a rich brown almost instantly and then you, as a child, would be ricocheting off the dining room walls. 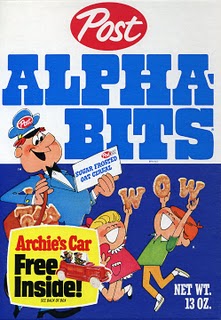 Despite the fact that Post basically wanted you to spell with its masterpiece of a marketing campaign, Alphabits were really sweet and did a fine job of rendering your added milk super-sweet, too. They had a nice vanilla flavor but lately have gone way overboard adding marshmallows and other sundries. I miss these originals. 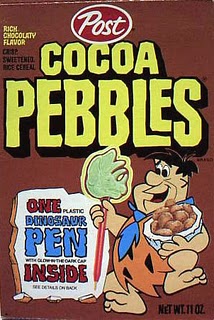 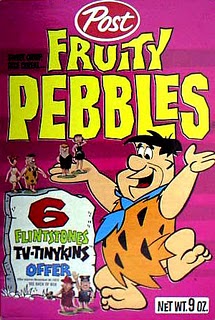 I never quite understood why Pebbles got her own cereal as opposed to Fred or Barney, who both ended up hocking the stuff anyway. Maybe it’s because no one would likely eat Frosted Fred’s with Barney Bits. Anyway, I digress. You certainly got a whole lot of bang for your buck with these cereals as they were tiny and it didn’t take much to fill you up. 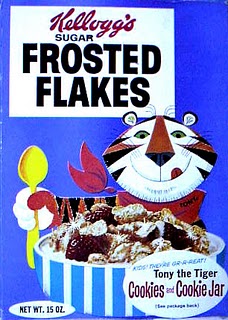 Thanks to the Thurl Ravenscroft-voiced Tony the Tiger, I would pine over these beauties all the time. Not too sweet, not too ‘just-plain-corn-flakes’, Frosted Flakes still remain a favorite of mine and I think I would pretty much just eat them all the time, given the chance. 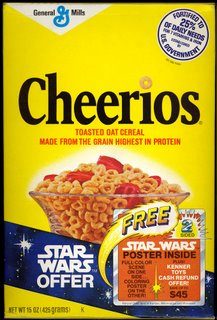 So I guess this stuff is good for you or something? Huh, I had no idea. Anyway, I was always a bigger fan of the Honey-Nut sister cereal, but my daughter absolutely goes bonkers for these little guys. Also good for potty-training target practice, by the way. 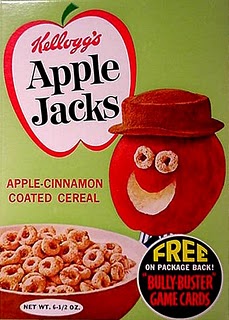 Oh what can be said about Apple Jacks: They taste a little bit like apples (going so far as to include little bits of apple on each one), and… well, something having to do with jacks. I have no idea. Regardless, this is one of those cereals that makes your milk really tasty, too. 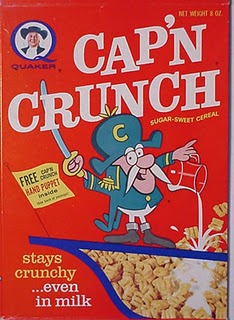 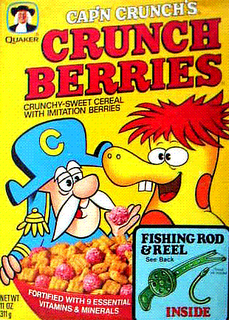 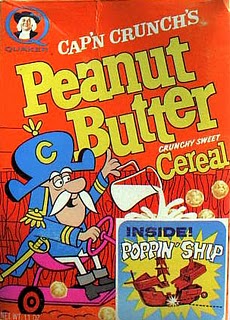 Cap’n Crunch commandeers the Guppy and does a fine job of forcing his breakfast wares down the little kiddie’s throats. But beware! His cereal, as it stays primarily crunchy in milk, will rend your mouth to ribbons. The addition of Crunch Berries, though deliciously ‘berry-esque’, doesn’t help any only to aid in making it more yummy. If you want a flavor of this cereal that won’t ruin your inner mouth, go for the Peanut Butter version. My personal favorite. 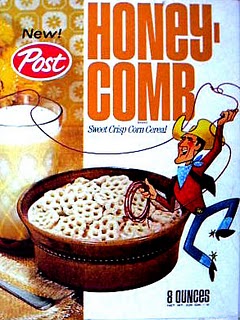 Honey Comb look and taste like honey. If said honey were created by bees that were made from cereal. Let’s face it: they really don’t taste that much like honey (or combs, for that matter), but they are remarkably huge. These things have the size and shape of regulation wagon wheels. Still darn tasty though. 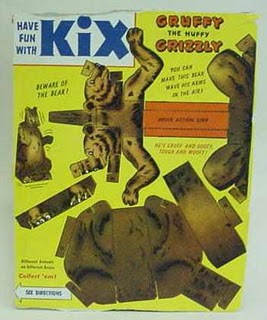 Much akin to the long-lost cousin of Trix, only in boring one-flavored design. Still, I always enjoyed them when I was forced to consume them by relatives or neighbor-kid’s families who were far stupider and less lenient than my own. 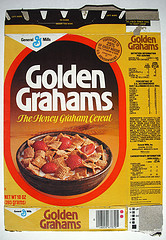 Golden Grahams are quite similar to bashing up a sack of graham crackers and pouring milk over them, which is fun, too, I guess. They are quite good and really crunchy. But, let them go too long in the milk and you’ve got yourself a bowl o’ Spackle. 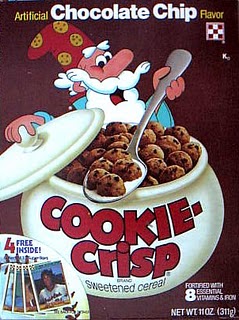 “Let’s all have a big old bowl of little cookies for breakfast, kids! Mom won’t mind!” Well, she might since they taste exactly like they look and sound.

I never quite understood the whole, ‘Mikey likes it cuz he’ll eat anything!’ ad campaign. Rather than give him a big old bowl of insect larva or winter-whitened dog shit, they just offered him Life; quite possibly one of the tastiest cereals of all time. Oh well, at least he did like it and survived his Pop Rocks and Coke suicide attempt… Kidding. 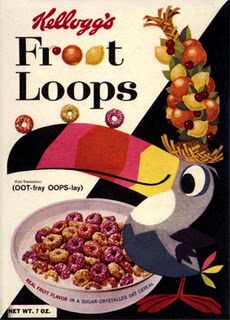 Classic. Toucan Sam and his wonderful rings of fruity goodness. Yes, the flavors and style has been messed with and tweaked over the years, but the shape has always remained the same, thankfully. These bad lads fall under the same mouth shredding category as the Cap’n, and they, too, are awesome. 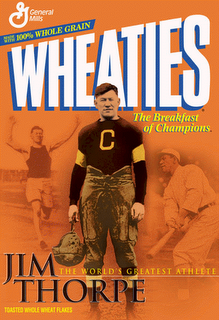 Who didn’t dream of having their picture splayed out all over the front of a Wheaties box? I always wanted to be the kid in the middle enjoying the cereal while other people did sports stuff around me. I was never that into playing sports. I watch an awful lot of it though. It’s also amazing just how much sugar this stuff has in it! 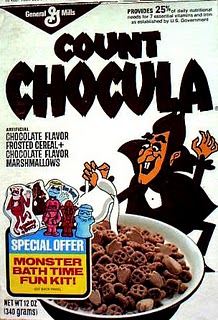 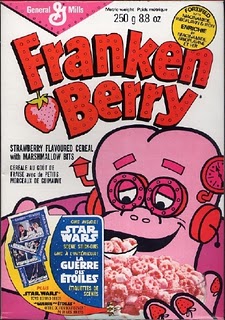 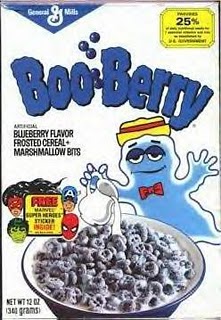 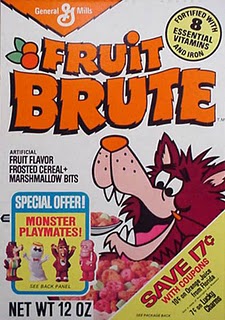 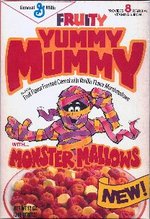 The Monster Cereal Family has been around a long time and has, unfortunately, lost a few brave soldiers along the wayside. It is nearly impossible to find the big three: Chocula, Frankenberry, and Boo-Berry outside of Halloween, and almost unheard of to locate a box of Yummy Mummy. And, as far as I know, Fruit Brute is extinct. Basically, you’ve got your chocolate, strawberry, blueberry, and mixed-berry varieties plus marshmallows, each with its own subtle nuances. Sweet as hell, though. 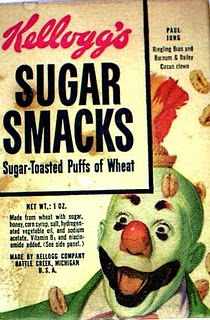 Sweet Jebus, that clown is one scary dude! I, of course, do not remember this box design, but I’m darn glad that they did away with it… I’m getting nightmares already. Anyway, Sugar Smacks, and its ‘Golden’ brethren, looked like puffed-up beans and I always thought that’s what it was. I’m still going to pretend that’s what it was. Ah, nostalgia. Not too awful sugary. The cereal I mean. Nostalgia is always sweet. 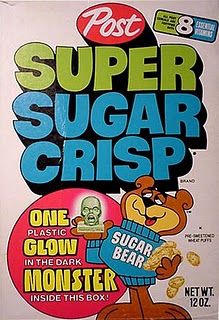 Part and parcel the exact same as the above ‘Smacks’, Super Sugar Crisp had to drop its sugar moniker when it was decided that labeling something as ‘sugary’ was somehow worse than including the ingredient in the product. Makes no sense to me. Anyway, now it’s Super Golden Crisp, or just Golden Crisp. Still un-tampered with greatness. 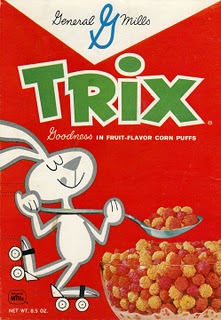 Silly rabbit, Trix are for kids! Yet, despite this simple fact, the stupid bunny still attempts to steal this cereal… HIS cereal, from those evil, conniving children. I always wanted to give that poor shmoe some of his sought-after treat. Oh well… nice and fruity and, of late, back to its original puffed balls/rabbit turd shape. 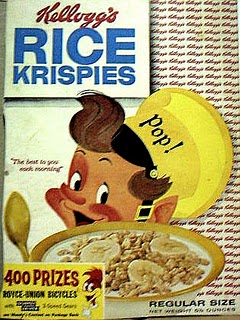 How stinking much fun was hovering your head over the bowl while those little bits of puffed rice played music in your ears! Just a darn blast! Some of my best friends were Snap, Crackle, and Pop… they’ve been involved in frosted versions, fruity versions, marshmallow versions… and so many other variations, but the simple fact remains the same: They pop in your milk: they SING to you, for crying out loud! Not sweet, per se, but much more fun that all the others.