Grub > Food > The Six Most Hideous Uses Of Bacon

The Six Most Hideous Uses Of Bacon

Clearly one of the BEST uses of Bacon

Bacon is awesome. Besides being the anchor meat of any delicious breakfast, it brings all kinds of smoky, salty goodness to all kinds of dishes. Bacon turns a boring baked potato into a rock-out-with-your-cock-out, smoky thrill ride. Bacon turns a healthy, wimpy lettuce and tomato sandwich into one of the most macho things you can put in your mouth on a Sunday afternoon. Hell, bacon is so fantastic it’s one of the few things that can make a steak taste even better. Wrap a strip of it around a chunk of tenderloin and you have one of the finest, most expensive entrees in the world. Bacon is used all over the world by people who want to make just about anything taste awesomer.

But like all good things, there’s a temptation to overindulge. A couple beers can lead to good times, good laughs, and great memories you’ll cherish for a lifetime. 24 beers can lead to broken teeth, vomit-stained clothes and a mysterious burning sensation in your crotch. Bacon can be just as dangerous. Used appropriately, it’s the shit. Used inappropriately, it’s just shit.

Look at it. It’s long, brown, and bulbous. Hmm? What other thing is long, brown, and bulbous? We can’t remember, exactly, but we’re pretty sure we don’t want to eat it. If those three adjectives don’t turn you off, consider this; Bacon is mostly fat. Unless you’re really into plus-sized girls covered in Hershey’s Sauce, do you really want chocolate-covered fat in your mouth? If you do (you sick freak), you can buy some here. You’ll have to supply the girl yourself.

Whether you’re a kid, a candy lover, or a sexually precocious teenager, everyone loves a lollipop. Most lollies are generally fruit-flavored rather than smoked meat because sucking on one is phallic enough as it is. But the dirty folks over at Lollyphile (which must get a lot of traffic from disappointed perverts) have decided to make God angry by offering Maple Bacon Lollipops. Now, a maple flavored lollipop with a hint of bacon may sound good (who hasn’t accidentally dipped their bacon in pancake syrup at least once?) but these bad boys have actual pieces of salty, smoked pig flesh embedded in each pop. According to the website, they’re “a perfect gift for the sweet-toothed pork aficionado in your life.” Unless you’re friends with Homer Simpson, we think you can probably stick to cherry. 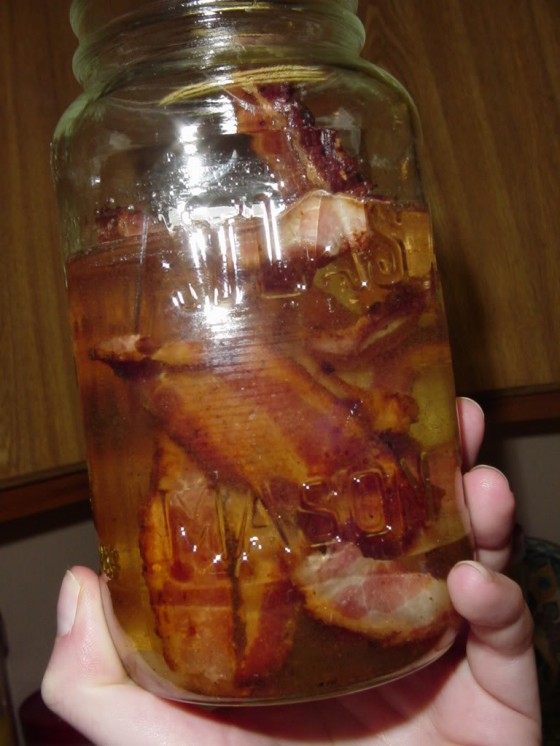 What happened with vodka? For generations, alcoholic Russians have been happily drinking themselves to early graves with plain old straight vodka. In the last few years, however, people started infusing vodka with just about anything that would fit in a bottle. Well, a distiller called Black Rock Spirits has gone the distance and infused that shit with bacon. Called Bakon – because, you know, it’s classier with a ‘k’- their bacon vodka is perfect for destroying your liver and your arteries. Now, if someone could just find a way to get cheddar cheese in there…

Have you ever tucked in to a big mayonnaise-dripping BLT at lunch and then offended everyone in your office, church, or school with your horrible bacon breath? Well, normally you’d pop in an Altoid and all would be forgiven. But with Uncle Oinker’s Bacon Mints, you can skip the BLT all together! Put one of these god-forsaken treats in your mouth and you can have all the bacon breath without any of the bacon. Wait. Isn’t that supposed to be the good part? If you’re having doubts, check out this stirring testimonial from the website: “Wow, they’re bacony!” Sounds great, but do you know what else is pretty bacony? Bacon!

Now, as far as we know, no company actually has the stones to sell Bacon Cookies, but there are plenty of recipes and pictures online to make you give up eating forever. There are a whole bunch of different types, but like everything else nefarious and unholy in the world, bacon cookies were invented by Germans. Eating speckkuchen, as they are lovingly known by weird performance artists and Nazis everywhere, is as traditional in Germany as beating up the lame and sick. Besides leather shorts and hardcore scat pornography, have those Teutonic bastards ever done anything good and pure?

By now, you’re probably pretty sick of things that shouldn’t have bacon in them having bacon in them. Well, swallow that little bit of puke in your mouth and help yourself to a big bowl of Candied Bacon Ice Cream. Yes, since ice cream isn’t fattening enough, some grease-addicted butterball went ahead and added tiny pieces of candied bacon too it. Besides looking like week-old potato salad (are those noodles in there?), bacon ice cream doesn’t make sense. Just because two things are great on their own, doesn’t mean they will be twice as terrific when you put them together. If that were true, don’t you think someone would have released boob flavored pizza yet?

Incidentally, if you guys ever hear of someone introducing boob flavored pizza, totally let us know.