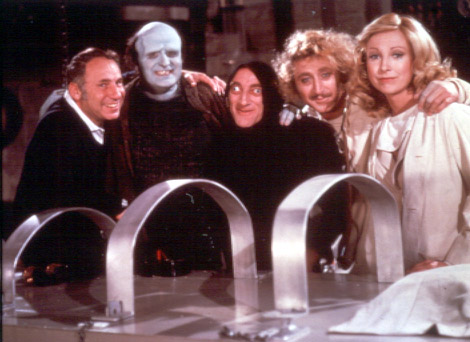 Long title? Yep. There just so happens to be quite a difference between Spoofs (parody) and Satire. Here, I’ll help you:

1. Satire: the use of irony, sarcasm, ridicule, or the like, in exposing, denouncing, or deriding vice, folly, etc.
2. Spoof: a mocking imitation of someone or something, usually light and good-humored; lampoon or parody.

See the difference? Though all of these horror films thrive on humor as their backbone, each one has a structure that falls into one of those categories above. Now, generally, a satirical flick tends to be more of an homage and a tongue and cheek attempt to grasp the genre but with a more, ‘what if this funny thing happened’ approach. Parody, on the other hand, tends to take on a more literal, ‘poking fun at but with a sly nod to the source material’. These slight differentiations help more easily separate the films below. Here are the best of the best.

From IMDB: “Spoofmaster Leslie Neilsen appears in this outrageous, unofficial comedic sequel to ‘The Exorcist’ as Father Mayii, the exorcist pro who comes out of retirement when summoned by an idealistic priest, Father Brophy, to help out geeky suburban middle-age mom, Nancy Aglet (Blaire) who has recently been re-re-re-repossessed! But, two tacky popular televangelists, Ernest and Fanny Ray, hosting a local religious wacko program, figure they can cash in on Nancy’s dilemma and want to broadcast the exorcism.” This movie, as a definite spoof of the Exorcist as a whole, is very funny and features a top-of-his-game Neilsen.

From IMDB: “Hot on the heels of recent remake Dawn of the Dead comes Simon Pegg and Nick Frost’s black comedy zombie satire, in which Shawn must save his friends, mum, and ex-girlfriend from the masses of lumbering dead by holding up at the local pub, the Winchester! Unlike recent zombie-fests, these dead-ites are pretty tame, lumbering monstrosities, much like the ones from the older zombie films. This is used to simple comic effect throughout as the ‘heroes’ seem to have plenty of time to think about things before being attacked.” Though often mis-categorized as a spoof, this amazing zombie flick is a full-on homage to Romero himself. It offers up tons of laughs while simultaneously never spitting in the eye of the genre. Director Edgar Wright got it, well, right.

From IMDB: “Primarily a spoof of the Friday the 13th series, but also takes shots at several other horror films. After his family moves to a new house, a young boy discovers a mysterious book describing the curse hanging over the date of Saturday the 14th. Opening the book releases a band of monsters into the house, and the family must join together to save themselves and their neighborhood.” A lot of people really hate this movie, which is kind of a shame. It does a pretty decent job of mocking the myriad horror flicks of the time and dishes out a good deal of laughs. Sure it’s stupid, but that’s the point. Also, it’s pretty tame as I recall watching it as a youngster on HBO. I was a weird kid though.

Parodying all of the following films over the years: The Scream trilogy, The Sixth Sense, I Know What You Did Last Summer, The Blair Witch Project, Halloween, The Exorcist, The Shining, Hollow Man, Poltergeist, Urban Legend, The Haunting, Pet Sematary, What Lies Beneath, Friday the 13th, A Nightmare on Elm Street, The Ring, Psycho, The Others, The Texas Chainsaw Massacre, Signs, The Grudge, and the Saw Franchise. And those are just most of the horror ones, there’s at least fifty mainstream film spoofs as well! Yeah, these guys did it all and, though most are pretty funny, for the most part they buried the spoofing genre for everyone else. The first, as is often the case, is the best.

From IMDB: “Mel Brooks’ hilarious “Young Frankenstein” is one of those strange films that is so outlandish and makes fun of itself so much that it sucks the viewer into its twisted world and does not let up until the final credits roll. The title character (Gene Wilder) decides to go to Transylvania and continue the research of a late relative. What follows is a comic joy-ride that involves the assistant (Marty Feldman), the love interest (Teri Garr), the stuck-up girlfriend (Madeline Kahn), the weird house-keeper (Cloris Leachman), the odd detective (Kenneth Mars) and naturally the monster himself (Peter Boyle in a priceless performance). Gene Hackman’s whacked cameo as a the blind man who encounters the monster is one of the best sequences during the history of the cinema.” This open-handed salute to the original Universal Horror Movies of the 40’s and 50’s is not only a fine example of the amount of love a director can put into his film, but it’s also one of cinema’s greatest movies of all time.

From IMDB: “Another spoof from the mind of Mel Brooks. This time he’s out to poke fun at the Dracula myth. Basically, he took “Bram Stoker’s Dracula,” gave it a new cast and a new script and made a big joke out of it. The usual, rich English are attacked by Dracula and Dr. Van Helsing is brought in to save the day.” No, it’s not one of Brooks’ best films (see above) but his handling of the over-popular vampire mythos was pretty well made. Once again Neilsen, a man not known to turn down a spoof, returns to the very genre that made him so famous and funny.

Put so very eloquently by IMDB: “Pandemonium” is a special, but not so loved like maybe could have been, parody about horror movies. It is about a school of cheerleaders and a crazy man who is out to kill them. One by one the’re offed without mercy in myriad ways. It’s a spoof that reads like “Friday the 13th” but with more cookies, more milk and more laughs.” Yes, all in all it’s a pretty funny flick that really does try hard to be too much like the classic Student Bodies (see below) but falls short. Still, bored one night and have a taste for cheese, it’s not an entire waste of time.

This is the granddaddy of the horror spoofs. It’s spark ultimately ignited the black powder for everyone that followed. Here’s the IMDB story: “A killer named the Breather terrorizes students at a high school. Whenever the killer finds students having sex, he kills them. He has some intense issues with which to deal. He likes to breathe heavily, and he likes to make prank calls while talking through a rubber chicken.” Yeah, despite it’s classic status, this movie is just utterly ridiculous and still manages to have some of the greatest one-liners of all time. It has just recently been released on DVD for the first time so now there’s no excuse for you not to watch this. It’s amazing.

Arguably Bud and Lou’s best film, this comedic homage to the best in Universal Movie Monsters looks like this IMDB write-up: “The world of freight handlers Wilbur Grey and Chick Young is turned upside down when the remains of Frankenstein’s monster and Dracula arrive from Europe to be used in a house of horrors. Dracula awakens and escapes with the weakened monster, who he plans to re-energize with a new brain. Larry Talbot (the Wolfman) arrives from London in an attempt to thwart Dracula. Dracula’s reluctant aide is the beautiful Dr. Sandra Mornay. Her reluctance is dispatched by Dracula’s bite. Dracula and Sandra abduct Wilbur for his brain and recharge the monster in preparation for the operation. Chick and Talbot attempt to find and free Wilbur, but when the full moon rises all hell breaks loose with the Wolfman, Dracula, and Frankenstein all running rampant.” A fun, funny flick that speaks completely of the era. Stands up pretty well today, too.