It’s good to be back boys.

Spring Training is officially underway in Florida and Arizona! The first games began this weekend, and most pitchers and catchers have been in camp for nearly two weeks already. If you’re like me, buried in snow, this is about as welcome a sight as there can be after a long winter without baseball. Here are some of the best things about Spring Training and what to watch for as our national pastime begins anew.

Oh sweet, beautiful, green grass. If you’re like me, and most of the midwest and northeast, you are buried under mountains of snow, and winter is still not over. We’re expecting another storm to dump more of that white crap this week, and nobody knows when we’ll see the lawn again. It’s not so at Spring Training where they have gorgeous, well-manicured grass just waiting to be played on, a welcome sight for these and many other eyes.

This sight gives hope that someday that snow will melt, and there will be grass under that snow. Probably not as nice as the fields down at Spring Training, but damn it, we will have grass eventually. Until then, this holds us over. 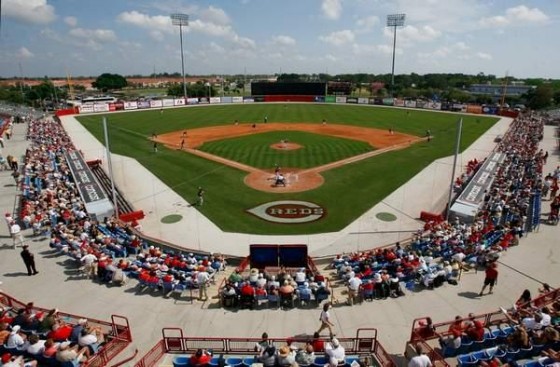 Oh beautiful grass, how I would like to roll around on you.

Want to know if a player has a real shot at making the major league roster or not? Check out what number he’s wearing this spring. Usually, most players over the number 60 don’t have a shot in hell at making it to the 25-man roster that heads north with the big club. That doesn’t mean it’s impossible, and it’s always fun to get a look at the future prospects your team has.

Plus it makes you look like a much smarter and more well-informed fan a couple of years down the road when you can point at your TV during an MLB game and say, “Boy, I remember when ol’ Kelly Dugan was wearing number 72 down in Clearwater with the Phillies a few years ago, glad to see he finally made it to the show, showed a lot of promise back then.”

Aw, just missed out on a 25% better chance of making it by one number.

Going into spring, every team has one or two positions or roster spots that are up for grabs. It’s interesting to watch all spring as generally it isn’t a huge part of the roster, maybe a 4th or 5th outfielder, or an innings eater to come out of the bullpen. Spring is their time to shine, make an impression on coaches and management, and get that big league contract.

This is also what you’ll be reading about in most of your local papers, websites, or blogs, because it is the only real news to come out of spring training, barring any type of big injury to a regular player. So be ready to hear how impressive some guy you’ve never heard of has been in his attempts to stick with the team.

This is geared more towards the casual fan, and even some die-hard fans who don’t care, or notice smaller market teams. But every spring some aging, star player who has spent the majority of his career in the spotlight, on contending teams, signs on with a team who is out of the spotlight. This is mainly because this team is the only one willing to offer the kind of money they want, and this year they’re mainly doing it with minor league deals. But it still takes getting used to. These signing give hope to fans of those teams, because if they can somehow rekindle that old magic, they might just help their team contend.

Todd Frazier to the Rangers? That’s so weird! Or how about Madison Bumgarner heading to Arizona? Then most show why the big teams didn’t want them, and go unnoticed for the remainder of the season. But maybe these guys will be different, and rekindle that spark.

If you’re lucky enough to live near, or travel down to Spring Training this year, first off fuck you, but second, this is your best chance to get autographs from the star players. The stadiums down there are 1/4 the size of most MLB parks, and since most star players are only there because they have to be, this leaves a great chance to get autographs. Get there early, BRING A PEN OR SHARPIE!, and be sure to get down on the railing near the dugout.

This is when star players get to show what a great humanitarian they are, and what better chance to do that than letting them practice their signature on your memorabilia?

Spring Training is a time-honored tradition, something that gives northerners hope that warm weather is coming. But until it does, Spring Training is here to help us get through the last of the long winter months.