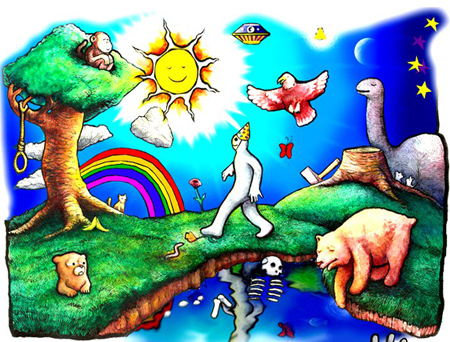 With more and more extremely talented people turning to the internet to showcase their work it’s hard to keep your bookmarks updated with all the hilarious comic strips out there. Since we at Gunaxin feel the pain of our readers in finding the best webcomics we decided to highlight several of them in an article and let you decide which one is funnier. Since there are thousands of strips that update regularly we decided to only showcase comics that are meant to be funny and follow in the tradition of newspaper comics with very short story-arcs. Even so we are sure we missed a bunch, so please let us know which comic we missed in the comments section, and make sure to vote for your favorite webcomic. 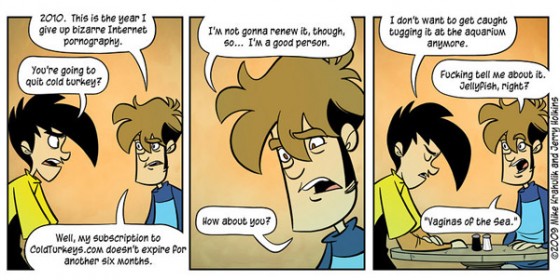 Penny Arcade has been around for more than ten years and is one of the few webcomics that has grown into a whole business. Now Holkins and Krahulik (the comics creators) have a convention, a yearly donation campaign and several video games based on the Penny Arcade characters. The humor is top notch but unless you’re up to date with the gaming world some strips could be a bit puzzling.

Better known as SMBC, this comic has been around since 2002 and is probably one of the most “Far Side”-like comics out there. It’s a single panel commentary on life, romance and “geeky” stuff like math and chemistry. The strip is updated daily and every Monday you can even enjoy a short movie that shares the same brand of humor. 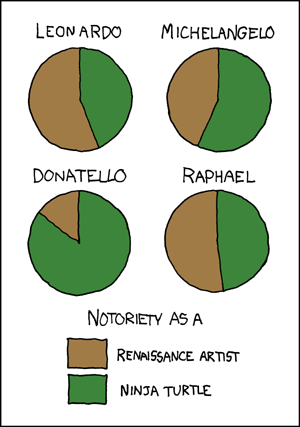 This comic, created by Randal Munroe, a former contractor for NASA, has probably one of the most dedicated fan-bases. It’s also one of the few webcomics available under a creative commons license and one of the comics that doesn’t display adds on the site. Despite this, the powerful jokes and the unique tone of the comic have allowed Randal to become self-employed.

Created by Nicholas Gurewitch and placed on hiatus since 2008, PBF is probably one of the most influential comics out there. Although it was published in a newspaper as well as on-line PBF definitely feels like internet material, never being afraid to step over boundaries. The artwork is constantly changing and incredibly beautiful and the jokes are often hidden messages about life and the world.

Least I Could Do

Debuted in 2003, LICD is created by Ryan Sohmer and Lar deSouza and features the adventures of an extremely lucky playboy. While the comic does have short story arcs, most of the strips are independent and quite humorous contemplations on current events and sexuality. 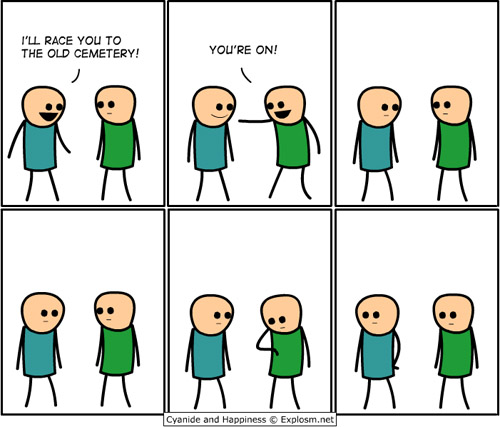 Founded in 2004, Cyanide and Happiness is a very, very cynical look at life through the eyes of it’s four creators. Each strip had a bitter, often shocking message about the paradoxes of life either that or a boner joke. Featuring such characters as red shirt guy, seizure man and green shirt guy this comic is sure to bring a smile to your face if you like dark humor with a dash of non-sense. 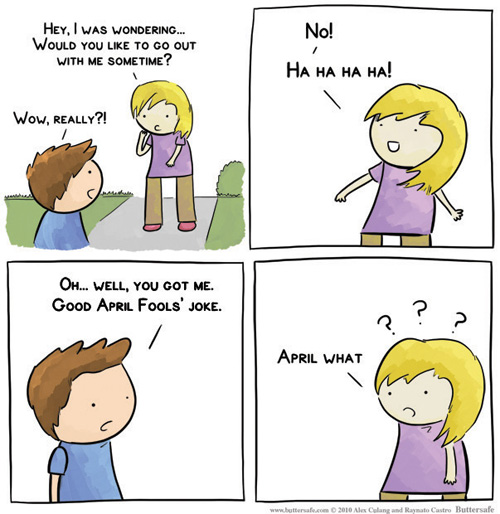 Created by Raynato Castro and Alex Culang, Buttersafe is a more recent comic having started in 2007. However, their brand of random humor is catching on making them pretty popular. While some strips can be a bit bizarre and rely heavily on the reader expecting a joke that never arrives, the strip is constantly improving. 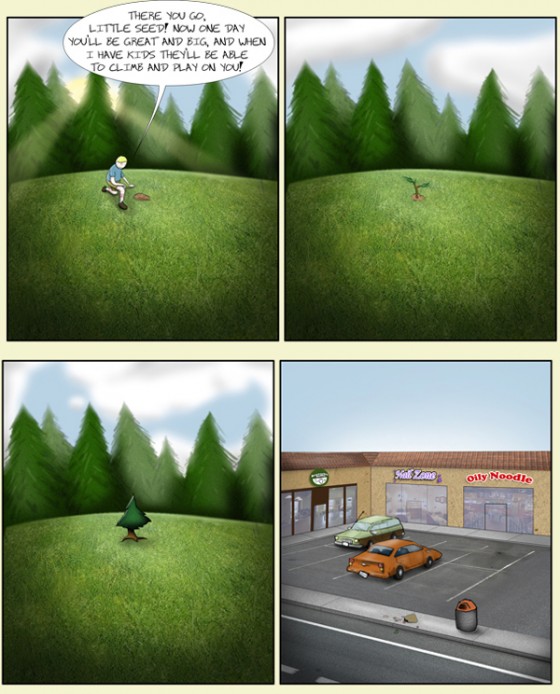 This comic created by Wes and Tony is a true marvel of bitter, sometimes random humor. The art is well done and they always include a secret comic in the upper right corner (make sure to check it out). Also the two behind it started their own video channel on youtube so there is more content to be seen there. 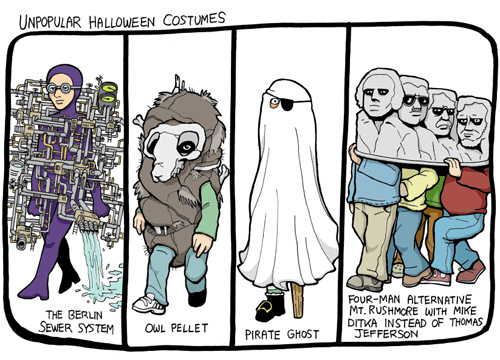 This comic, by Canadian Winston Rowntree, has been featured on Cracked.com several times. While most of the jokes are in text form and sometimes the visuals can be lost among word bubbles it has some pretty in depth commentary on consumerism. Certainly a different approach to webcomics and an interesting read. 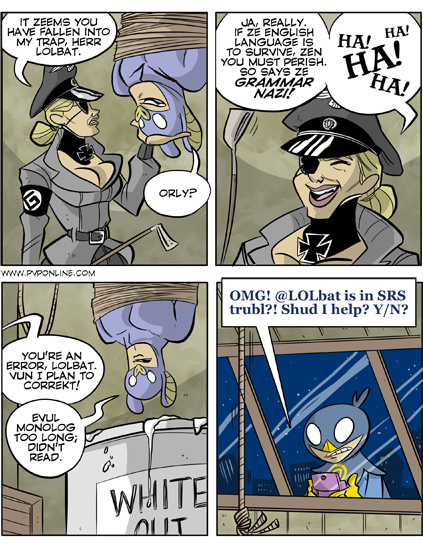 The comic written and drawn by Scott Kurtz follows the adventures of a fictional video game magazine company and its employees. The comic deals with interesting concepts and over time moved more and more away from gaming and into social cometary. Hated or loved, PvP is one of the biggest webcomics out there. 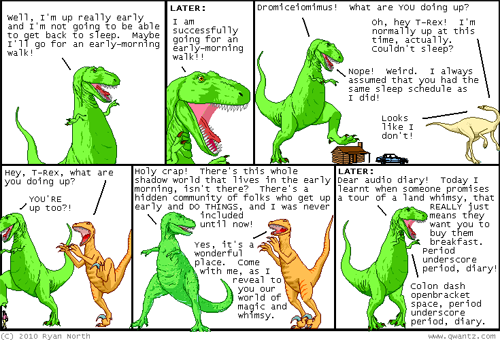 This comic, created by Canadian writer Ryan North, is best described as an artistically constrained , thought provoking philosophical commentary. We say this because the art is the same poor drawing of dinosaurs, yet the text always changes to reflect different topics such as happiness, the secret of life and love and ethical relativism. This webcomic also has several easter eggs so make sure to check those out 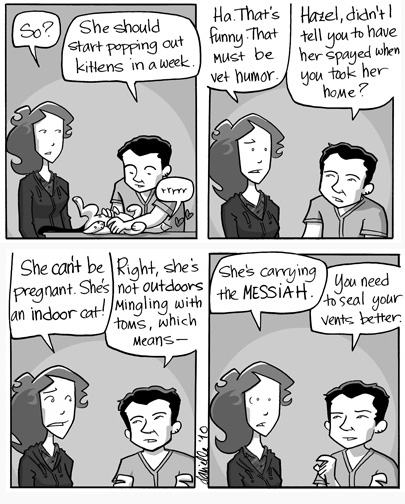 Drawn by Danielle Corsetto, Girls with Slingshots centers around the life of a post-college grad named Hazel as she encounters daily challenges such as job-hunting, partying, romance and talking cacti. The strip is above everything else very honest and it’s not afraid to deal with mature themes such as a lesbian couple. However, the more heart warming moments are always balanced by well thought out jokes.

Created by Canadian cartoonist Stephen Notley, Bob the Angry Flower follows a very cynical and usually angry flower as it deals with various topics, many of which tend to be on the geeky side. Probably the best description of the comic comes from writer Michael Swanwick who said that: “Bob the Angry Flower experiences all emotions at exaggerated levels. He builds giant killer robots, he deploys world-destroying lasers. He is sort of like your id with an unlimited budget.”

The Book of Biff 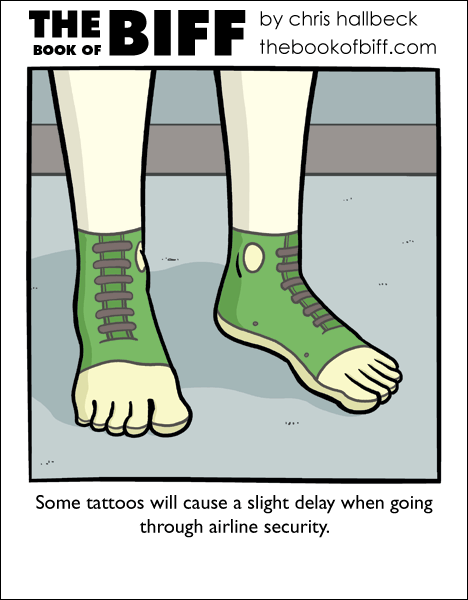 The Book of Biff feels like an old Freakazoid cartoon, with many jokes based on puns and mentioning such creatures as lint fairies and motor trolls. The whole webcomic has an innocence to it that makes it endearing and that one panel with a very unhappy looking Biff, tells an awesome story of childhood.

Nedroid’s Picture Diary is a strange mixture of almost innocent commentary on life mixed with adult themed jokes that have bitter undertones. It almost makes one wonder if Anthony Clark isn’t actually two people. However, this also means that the comic will probably satisfy a lot of readers and always surprise. Worth checking out as there are some truly interesting gems in here. 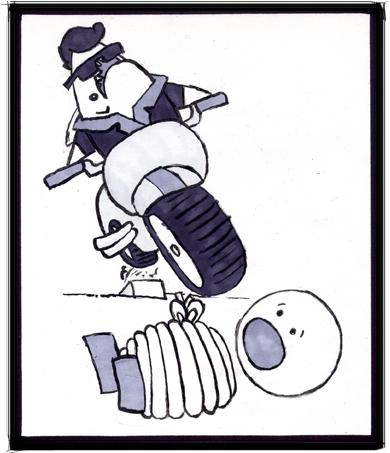 A minimalist one panel this comic follows one character that is always attacked by a shark. With no words the whole humor derives from the peculiar ways the shark conducts it’s attacks and the often hilarious drawings. While not for everyone this comic will certainly appeal to fans of absurd non-sequiturs.