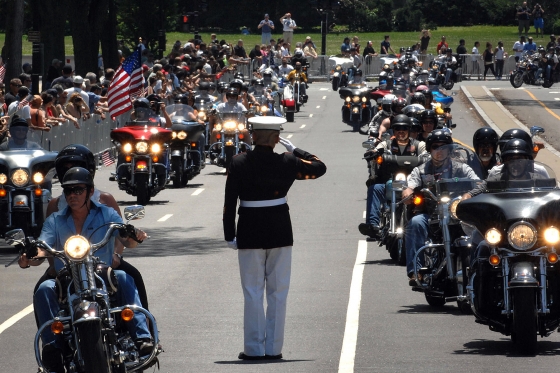 Rolling Thunder is a non-profit organization with over 90 chartered chapters throughout the United States and members abroad. While many members of Rolling Thunder are veterans, and many ride motorcycles, neither qualification is a prerequisite. Rolling Thunder members are old and young, men and women, veterans and non-veterans. All are united in the cause to bring full accountability for POWs and MIAs of all wars, reminding the government, the media and the public by their watchwords: “We Will Not Forget.” The name Rolling Thunder is derived from the constant bombing of North Vietnam in 1965 and was given the name, “Operation Rolling Thunder.”

Starting in 1987 and continuing through to the present, Rolling Thunder has been conducting the “Rolling Thunder Run” in which all of its members attend. For more than 30 years the members of Rolling Thunder have converged on Washington, D.C to show their continued support for the efforts to find lost service men and women of past conflicts. In May of 2001 the estimated number of motorcycles involved in this rally was 200,000; by May 2008 that number had risen to more than 350,000. During the weekend event Rolling Thunder is involved in many speeches given by military officials as well as many politicians. Rolling Thunder also makes the “Ride for Freedom” which leaves the pentagon crosses the memorial bridge and ends at the Vietnam Veterans Memorial. 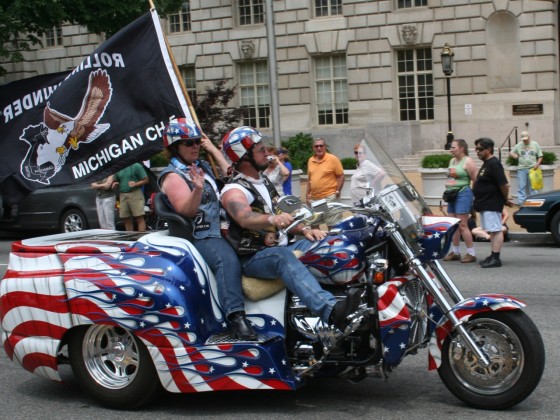 We personally ventured to downtown D.C. in 2009 to witness this amazing event. The first thing that struck us was the sheer volume of people and bikes involved in the event. The second was the variety of bikes, which seems like the perfect metaphor for the variety of people who have fought and died for this country. Sure Harley Davidsons were in the majority, but there were plenty of different types of bikes represented. So we thought we would share some of the bikes and riders with you, so you can see what it is like to attend this event in person. Trust us, we weeded this set down a ton, there were just so many great bikes to shoot photos of. Anyone can please feel free to use any of our images below to help spread the word about this awesome annual event :

Here is some pretty good video from in front of the Lincoln Memorial, to give you a better idea. People lined both sides of the route, all the way down Constitution and Independence Avenues. Many more videos can be found on YouTube.