Humor > The Day I Lost My Stuff

The Day I Lost My Stuff 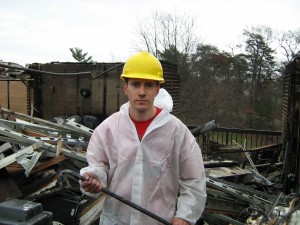 Wearing my Ovechkin shirt while salvaging.

December 17, 2007, is a day I’ll remember for the rest of my life because I lost everything I owned when my dimwit neighbor left a candle lit, which eventually put the building up in flames. So there I was, smack in the middle of the holiday season, digging through broken glass and pieces of roof.

“That’s just awful…” the reporter said. “You must have lost all of your Christmas presents.”

“Uh, not really, I didn’t buy anything for anyone,” I said.

The reporter quickly realized that there were more interesting people to interview, like the family of five next to me, the woman across the hall who lost her cat, or the woman who lives beneath me who was in Ethiopia, building orphanages during the fire.

Well, Mr. Reporter, here’s why I should be pitied…

I lost my hockey equipment (actually, most of it. I was able to salvage my custom-made jerseys). Does anyone realize how difficult it is to break in a single piece of hockey equipment, let alone a whole new set? I went 20 straight games without scoring a goal after that. To think, my team, the Screaming Squirrels, went into a free fall losing skid because I couldn’t put the puck in the net due to the uncomfortable new equipment that I had to get because of a damn candle!