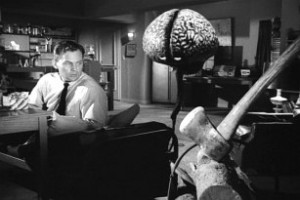 No other part of the human anatomy gets as much movie time as The Brain… well, maybe boobs, but that’s another list. It houses our consciousness and helps us to remember facts and stupid trivia. Horror movies have lived off this fact and made quite a few where the brain is out running around by itself being naughty. Apparently without the human body to reign it in our brains can be dicks. With that being said, because we all know that someone had to say it, here is the cream of the crop when it comes to brain movies. Eleven of them, actually.

The Brain (1988)
This is the epitome of brain movies. It’s got a huge friggin’ brain for crying out loud. A brain with a face that eats people! Oh yeah, it also has David Gale of Re-Animator fame.

The Brain That Wouldn’t Die (1962)
While there is no exposed brain in this black and white classic, we do get a woman’s head in a tray of fluid. While her sleazy boyfriend is out cruising for a hot new body for her she’s learning how to control that ‘mistake’ he keeps locked in a closet. Probably the most classic of all brain movies.

The Brain Eaters (1958)
Again, no actual moving brains, but this space ship crashes to Earth and lets out these little lint balls with antenna. They possess human brains and put them under their diabolical control. An early cameo by Leonard Nimoy makes this a great addition to this line up.

The Brain From Planet Arous (1958)
A crazy alien brain named Gor floats around, possesses John Agar and makes a distinct nuisance of itself until another alien brain that isn’t a douchebag shows up to stop it. This one ties with The Brain That Wouldn’t Die as a classic of the brain sub genre.

The Man With Two Brains (1983)
How could I not include this bizarre comedy from Steve Martin? He falls in love with a brain, there’s a hot Kathleen Turner in it and Merv Griffin is whacking people in elevators with Windex. This flick has got it all. Not scary, but probably one of Martin’s funnier roles.

Donovan’s Brain (1953)
Mad mogul dies in a horrific accident. A scientist decides that he can save the brain and he suceeds. Unfortunately, as we mentioned before, brains can be real dicks when they are seperated from the body. Soon, the brain is controlling the scientist and bad things happen. Real bad things.

They Saved Hitler’s Brain (1968)
Originally titled, The Madman Of Mandoras, this little flick went nowhere fast. They added the new snappier title and some new footage that doesn’t really match at all and a camp classic was born!

Creature With The Atom Brain (1955)
An ex-Nazi scientist seeks revenge. By using some wacky machinery he creates an army of dead men that cannot be killed. Using atomic energy, he makes their unliving bodies do his bidding. Not a lot of brains, but still a fun black and white flick from the past.

The Atomic Brain (1964)
Seems this old woman wants a new, young body. She hires a mad scientist type who can put her body in something with a lot less mileage on it. I always wondered one thing: they put a woman’s brain in a cat and visa versa. Um, seems like there would be a size variance there. Ya gotta love these old movies.

Brain Of Blood (1972)
It’s always a fun time when mad scientists decide to transplant a psychotic dictator’s brain into a new body that is a giant, hulking, deformed monster. Seems you’d want something a little more manageable. Maybe it’s just me.

Fiend Without A Face (1958)
Combining actual brains with antenna and spinal cords with some of the most digusting sound effects of any movie in this batch makes Fiend Without A Face the only one of these movies that actually scared me when I was a kid. That being said, this is probably the coolest of the brain movies.