Sports > Other > The Fan We Love to Hate

The Fan We Love to Hate 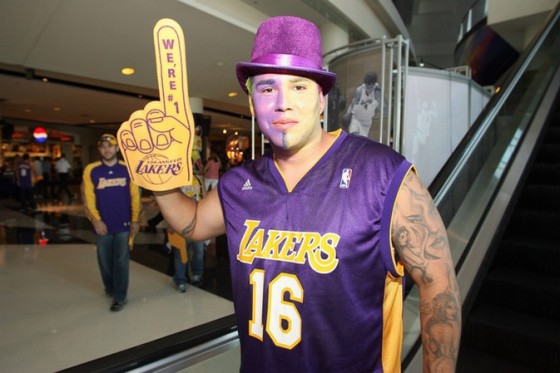 As a chronic watcher of almost any sport, I must admit, there’s one guy during any live telecast that makes me hate a team I have absolutely no allegiance to: the “We’re #1 guy!” guy.

You know him all too well. No matter how wretched the team, no matter how insignificant the game being played, We’re #1 guy is going to find a camera and let you know that his team–no matter the record–is by Gawd NUMBER ONE!!!!!!!! We’re #1 guy isn’t always the same and comes in many forms and fashions. Some of them obviously are die hard fans who love their team or alma mater deeply. However, more than a fair share of these idiots are phonies. And to quote the literary icon Holden Caulfield, “I hate a goddamn phony.” Without further ado, here’s the list of phonies:

Normally spotted at college sporting events. You’ve seen this clown plenty, usually shirtless, always shit-faced drunk. No matter if you flip to a mid-November Wednesday night game between Toledo and Directional Michigan on ESPNU, you can always find this douche looking for a camera. Never mind his soon to be Alma Mater (maybe) is 2-7 and hasn’t seen a .500 record in a decade, he and his ‘bros’ need you to know they’re on TV!! WOOOHOOO!! 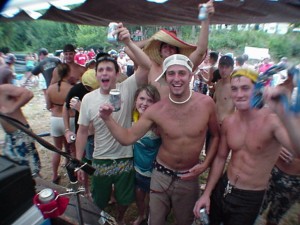 Yeah, they care about the game about to be played.

Usually seen at NFL or NCAA football games. It’s likely just grown up frat boy who has moved on to the pros, but not always. Sometimes, this guy is still at college games and chances are, he’s never seen the inside of a college classroom. Somehow, he got his paws on free tickets and he is his state U’s #1 fan (aka a ‘townie’, someone who lives in said college town though never attended a single hour of college) and guaranteed he’s sauced enough to make a complete ass of himself when he sees the camera flash his way.

Think this guy’s ever seen a college classroom? Me neither. Oh and Nebraska hasn’t been #1 since about 1985.

Most likely seen at any sporting event where she thinks she can get on TV or youtube. She makes the phony wave and flashes the We’re #1 sign and has the beauty pageant smile. And she probably couldn’t tell you the difference between a false start, a fast break or a balk. But dammit, We’re #1!!

Ok, maybe she\’s not THAT bad.

As a father of young kids, this is the one on this list most likely to get a pass (and it should have the blame directed to their numskull parents instead). But still, there’s something oh-so-annoying about this guy. Look, I get that it’s a great experience to see a game with dad, but please, take the temporary tattoo off of your cheek, throw that foam hand away, and stop saying you’re number one! 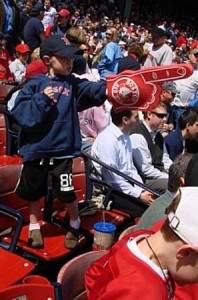 Yes kid, we get it…the Red Saaawks are number one!

No matter how miserable the last 20+ years of football they’ve played, Notre Dame fan lets you know they’re going to a BCS game if they win 6 games. Never mind that they’ve been consistently pummeled in bowl games for two decades, they annually schedule any Service Academy they can to get to .500, they have a TV contract with NBC that televises all of these dreadful games, that the one and only RUDY attended their divine institution–the real reason to loathe Notre Dame are their miserably obnoxious fans. The problem that makes them even more annoying than any other fan is this: the typical Notre Dame We’re #1 fan never set foot on the campus in South Bend to learn anything. They’re either a townie, Catholic, Irish, or live in Chicago or any combination of the two–a combination that makes this We’re #1 guy the worst of any of these perpetrators. 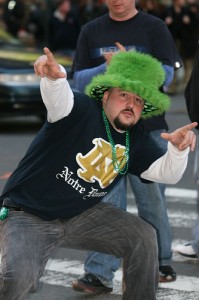