Previously we looked at the five worst getaway drivers in the history of crime, however, this time we’re looking at how criminals can screw up something as simple as a disguise. What should be as simple as a wearing a balaclava or a mask (really, anything that covers the face will do) is constantly screwed up by burglars. But it’s any wonder how you could screw up as much as these guys:

Dubbed the “Dumb and Dumber” criminals by the press, these two robbers held up their own local bank. What probably didn’t help was the fact that they were both regulars at the bank, they both usually went to the bank together and, unusual for an American town, they both had strong Australian accents. Oh, and also, they were still wearing their name tags from work. 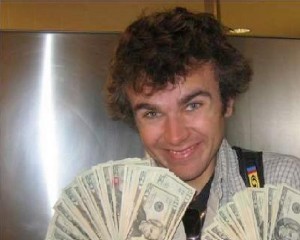 Also, they photographed themselves with the money.

Gee, who could possibly be holding up the bank? Had they stayed any longer, they probably would have started handing out photo I.D. We’d like to think that removing the tags before entering the bank they planned on robbing would have been a good idea, but would it have concealed their identities? Probably not. These two were already such unique customers, the bank tellers had a reasonably good idea who was trying to rob them. 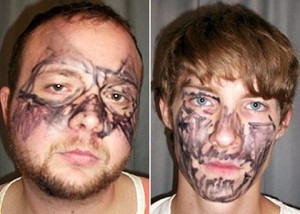 pictured: what they call a “disguise”

In what the police describe as being “weird”, these two decided to use textas to draw their disguises on. Apparently they were drunk, but one has to wonder how drunk someone has to be before they decide that textas are the best options out there. Hell, simply covering their faces with their hands would have been a better disguise. (Oh, and in case you’re American and/or don’t have Google, Textas are Australia’s equivalent to Sharpies. -Ed.)

Presumably after failing to drop an ACME weight on top of the bank, this robber turned to his second favorite cartoon plan: he dressed up as a tree. Sorry, make that a walking, talking tree with a very visible human face. 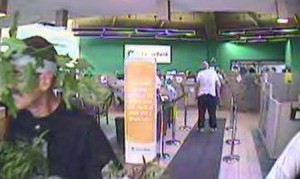 The man tried to make his own tree costume out of duct tape and branches. Perhaps perfect for blending in with a forest, but not so perfect inside a bank. If this is what he wears to rob a bank, we’d hate to see what he wears when he goes hunting: a suit?

In 2007, Aston Barth, figuring he had nothing better to do (and presumably after watching a re-run of Mrs. Doubtfire), decided to dress up in his mother’s finest skirt and rob a bank. Hilarity ensued. He came across the same problem those transvestite hookers you know nothing about occasionally have. He forgot to shave. 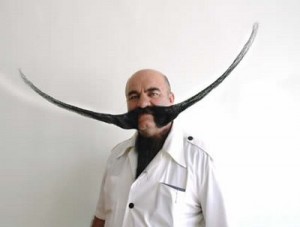 Strolling into the bank with armed only with a big ol’ bushy mustache, bank workers noticed he was “accessorized” with a skirt, a wig and plenty of make-up. But also the mustache. After successfully robbing the bank with his less than successful disguise, a tipster was able to identify Aston and he was quickly arrested.