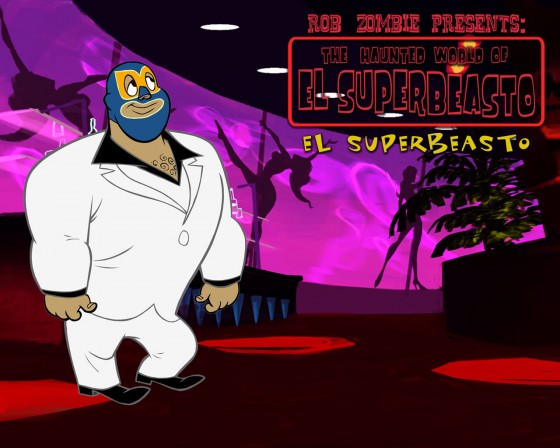 To hell with all those Academy Award winning flicks! To HELL I say! You want to laugh? Well, do ya? Do you want none of the pretentious hoity-toity bullshit that other films seem to ooze from every seam? Then you need nothing more than to watch this movie: The Haunted World of El Superbeasto!

Did I mention it’s animated? Sure is and in the style of Ralph Bakshi meets John Krikfalusi. Who, you might ask? Think Fritz the Cat meets Ren and Stimpy. There ya go. Anyway, the movie follows El Superbeasto (voiced by Tom Papa) in his quest for, well, a chick. He meets Velvet Von Black (Rosario Dawson) in the local dive bar and decides she needs to be doing him post haste. But, just then, from the darkness comes a brilliant ape, Otto, with a giant screw in his skull (Tom Kenny) who snatches her up and whisks her to the castle of one Dr. Satan (Paul Giamatti), who in turn believes her to be the one woman who can make him a true Devil thanks to the 666 on her ass.

Oh, and if you dig great tunes that sound like Weird Al gone horribly blue, you’ll love the soundtrack done by Hard and Phirm. Find this and watch it. NOW! Word of warning: this is absolutely not a kid friendly film. There are more sexual references and full-on nudity/sex in this movie than I’ve seen in a good long while. Yeah, you can thank me later.