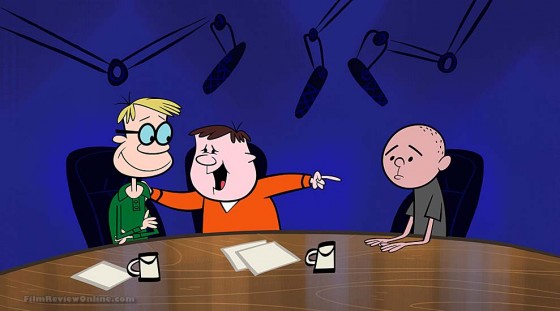 HBO is well known and respected for putting out quality programs all the time. From The Sopranos to The Tutors, the premium cable channel has yet to really strike out. So, it was only a natural progression to want to secure such amazing comedic talent as Ricky Gervais to anchor their newest, and, in this writer’s opinion most hilarious show: The Ricky Gervais Show (yeah, I get kickbacks from every time I write his name… Ricky Gervais)

The premise couldn’t be simpler: a UK audio show (radio and podcasts) starring Ricky Gervais, Stephen Merchant, and Karl Pilkington, has been masterfully turned into an animated toon basically featuring the trio as they would be in the recording studio. But that’s not all. For the most art, Ricky and Stephen do everything they can to insult, abuse, and otherwise own poor Karl who, as the target, has little recourse other than to take it and do all he can to get a few words in edgewise. It is absolutely hilarious. But why am I telling you this, check out some clips and go watch! Oh, Saturdays, 9:30. DVR it, unless you’re like me and home anyway. I have no life.