Sports > Other > The Greatest Cartoons Featuring The Sweet Science 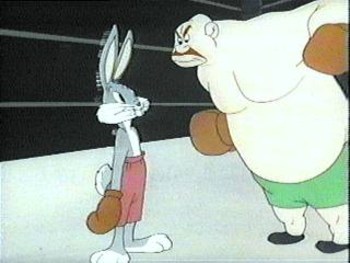 The what? Boxing. It’s boxing. The Sweet Science is just one of those terms old-timey folks used to describe the brutal viciousness and melodic prancing of boxing. I can’t imagine a more bizarre term to adequately convey a relatively simple sport featuring large men in silky shorts thumping the squash out of one another for as long as they can stand up, but there you have it: The Sweet Science. So, with that out of the way, here’s a few toons where our titular heroes float like butterflies and sting like… insects with stingers.

Daffy Duck – “To Duck or Not To Duck”

Popeye – “Let’s You and Him Fight”

Looney Tunes – “Boulevardier From the Bronx”

How about a couple examples of the just as exciting but significantly less ‘Sweet’ science of Wrestling!