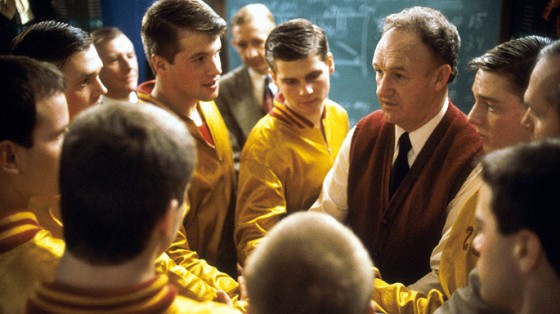 Everyone loves a good sports movie, whether it’s a comedy, a drama or a clichéd story about an underdog winning it all. Speaking of clichés, since there are already dozens of greatest sports films lists out there we’ve decided to limit ourselves to just one movie each for fifteen different sports. If your favorite sport didn’t make the cut, that probably means it’s so boring that not even idea desperate Hollywood sees anything worthwhile in it. Enjoy!

This is a movie for people who really, really like auto racing. Starring Steve McQueen and a lot of fast cars, this plot light, racing heavy film is about, wait for it, the Le Mans 24 Hour Race. The technical side of racing is definitely the appeal here, so don’t expect any plot twists. Sure, there’s some story about a rivalry tossed in and Steve McQueen kills someone in a flashback, but it’s mostly about capturing the speed, risk and excitement of going incredibly fast. So for any serious fans of racing this is pretty much the definitive genre movie. For those of us who only watch racing for the spectacular crashes, well, Talladega Nights was pretty alright.

No sport has had more movies made about it than baseball, which makes it tough to pick just one great film. There are a lot of good ones, but The Natural gets the nod because it’s become so iconic. Robert Redford stars as Roy Hobbs, an incredibly talented player who makes a comeback after over a decade of being out of the game with an injury. The plot gets a little silly at times and the ending is pretty clichéd, but despite that it manages to both tell an interesting personal story and capture what makes baseball such a great sport.

Hoosiers, loosely based on a true story, is about a small town Indiana high school team that’s led to a state championship victory by a couple of abusive drunks. It’s a classic underdog story, from the coach with a troubled past all the way to the ragtag collection of offbeat players. It even portrays basketball pretty realistically, because the team is mediocre and plays a boring defensive game until they manage to convince one star player to join them, at which point they kick all sorts of ass. A lot of great performances, most notably Dennis Hopper as the drunken assistant coach, makes Hoosiers worth watching.

OK, so the title of best bobsledding movie ever made isn’t heavily contested. In fact, as far as we’re aware, Cool Runnings wins this one by default. But regardless of its lack of competition it’s still a pretty damn fun movie. John Candy is always good for a laugh, and the film provides a good mixture of comedy and charm. It even manages to tell the story of the Jamaican bobsled team fairly accurately, except with roughly 100% more Jamaican stereotypes.

There have been a lot of great boxing movies over the years, and, come to think of it, these films have become much more entertaining than the sport itself. Among the numerous classics, none has been more influential than Rocky. Sylvester Stallone’s Rocky Balboa overcomes all odds, all his detractors and a complete inability to speak properly to stand toe to toe with the world heavyweight champion. It won the 1976 Academy Award, numerous scenes are iconic and its soundtrack has been completely ruined by being overplayed at every sports venue in the world.

Breaking Away is a coming of age story about four working class teens from Indiana (what’s with inspiring sports stories being set in Indiana?) who are trying to find a sense of purpose in their lives. The film focuses on Dave, who is obsessed with bike racing. He gets a chance to compete against a professional Italian team, who fulfill numerous Italian stereotypes by acting like jerks and sabotaging him. But thanks to the power of friendship he and his pals form a team and win another major race. It’s considered a classic American film, and it even got a short TV spin-off and a remake in Bollywood.

There are lots of football movies, and while many are pretty good they tend to portray the sport very melodramatically. This story of a group of prisoners taking on their guards avoids that, adding plenty of comedy while still capturing the brutality and excitement of the sport. It’s tough, it’s funny, and it’s hard not to get behind the team of prisoners and cheer them to victory. Plus, you get to see Ray Nitschke take a football to the groin from Burt Reynolds, which is something Rudy really lacked.

When you put Chevy Chase, Rodney Dangerfield and Bill Murray together, good things happen. Sure, the comedy is often crude and silly, but despite how juvenile it is it’s still far more memorable than any other golf movie out there. Between party crashing, gopher hunting and a climatic showdown on the golf course Caddyshack covers a lot of ground, but it’s the craziness outside of the game that helps make Caddyshack work. It’s quick and funny, which is a great way to tell a story about the slow paced game of golf.

Another more light hearted film, Slap Shot stars Paul Newman as Reggie Dunlop, a veteran player-coach in charge of a minor league team that’s in big trouble financially and suffers from consistently awful losing seasons. To turn the franchise around he employs a line of brawling thugs, lies to his players and blackmails his general manager, all leading up to a shot at the championship. It’s violent, funny, unabashedly vulgar and full of memorable characters, which basically makes it a movie about the 1970s Philadelphia Flyers but with more on ice stripteases.

Seabiscuit is the story of an overlooked horse who became a national sensation despite having a stupid name and needing to put up with Tobey Maguire riding him. Seabiscuit won all sorts of races, but the movie focuses on his race against the famous and infinitely more badass named War Admiral. It’s set during the Great Depression, and this backdrop helps explain why Seabiscuit became so popular. Everyone loves an underdog, especially during a time when the only hobbies available to people were following horse races or starving to death in Oklahoma. Seabiscuit can get a little too sugary at times, but it’s still an inspirational story about a very grim era.

Bloodsport is a movie where Jean-Claude Van Damme kicks the shit out of people for over three hours. This makes it the greatest martial arts movie ever made, and arguably the greatest film of all time. Van Damme plays Frank Dux, who is invited too and eventually wins a secret and illegal fighting competition. It’s considered a classic among martial arts movie enthusiasts for showing off a huge variety of fighting styles in a pretty accurate manner. It also jumpstarted JCVD’s career, which means we have Bloodsport to thank for years and years of completely ridiculous yet incredibly awesome action movies.

Wind is based on the true story of the first American to lose the America’s Cup to a foreign challenger before winning it back four years later. Wind’s most notable achievement is in making the rather obscure sport of sailing come alive with some incredibly exciting race scenes, and it manages to avoid most sports movie clichés as well. The American racer isn’t some apple pie eating, flag wearing stereotype, and his Australian opponent doesn’t try to sabotage him with evil laughter and a well placed boomerang. They’re just a couple of guys who like sailing, and after watching Wind you might end up liking it too.

Technically, Better Off Dead is really more of teen comedy with a bit of skiing tossed in, but since its only competition is lesser comedies and obscure foreign films it still deserves the title of greatest skiing movie. It stars John Cusack as Lane Meyer, a high school student who gets dumped by his girlfriend and decides the only way to get over this rejection is suicide. His numerous attempts backfire in comedic fashion, and Lane eventually ends up in a climatic ski race against the guy who stole his girl. Its dark and often surreal humour makes it one of the best comedies/sports movies of the 80s.

Escape to Victory is the “true” story of a group of World War 2 prisoners who are forced to play a game of soccer against their Nazi captors. No Nazis are a match for the combined force of Michael Caine, Sylvester Stallone and Pelé, so despite facing biased German referees the allies are able to fight to a draw and then escape from captivity in the post game chaos. It’s a fun and inspirational movie… until you read up on what really happened and learn that a Ukrainian team absolutely dominated the Germans over seven matches, before getting shipped off to prison camps where most of the players died. That’s not quite as inspirational.

Track and Field: Chariots of Fire

Chariots of Fire won four Academy Awards, which is enough to qualify it for a list on the Internet. It’s the true story of two British runners and what it takes for them to reach the 1924 Olympics and win medals. There’s probably no movie out there that better captures what it’s like to dedicate your life to athletics, and it’s so inspirational you’ll want to go outside and run a race as soon as it’s over. If you do, you’ll be reminded of what it’s like to dedicate your life to drinking beer and looking at porn instead of staying in shape, so this movie teaches a variety of lessons.