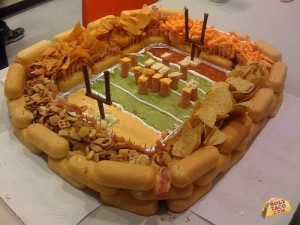 If Super Bowl means one thing other than football, it’s food. No good Super Bowl party is complete without something good to munch on. And you need something to eat with the beer, right? Be it pizza, nachos, what have you. Our own Fred has provided us with a few great ideas for wings. But let’s say you’re a little more ambitious. Traditional food simply isn’t cutting it anymore. In that case, I refer you to the good folks at Holy Taco. They managed to create an entire stadium made out of snack foods (yes, even bacon). Check out the photo above. It’s a pretty amazing project, I must admit. If you want to find out all the ingredients, how to make it, and see some pretty in depth ‘making of’ photos, head on over to Holy Taco and see for yourself. I don’t think you’ll be disappointed.