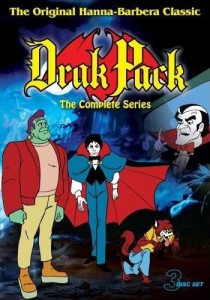 My love for the animated toon started naturally enough with Saturday Morning. Oh sure, I used to draw a bunch when I was a kid, and I even gave myself my very first lesson by copying Jim Davis’ Garfield since it was, and is, so very easy and not to highly detailed. But what ultimately got under my skin and made me the far better artistic person was the inundation of the morning cartoon. I would literally, without fail, nab my little art pad and my supplies and draw what I saw while I zoned out in front of such classics as Transformers, Voltron, Hong Kong Phooey, The Smurfs, Thundercats… you name it. So, I figured I’d kick off another Halloween list focusing on those wonderful cartoons of yesteryear now often replayed on the wonderful Boomerang channel: The Top 10 Monster Themed Toons from our childhoods. Sit back and ENJOY!

Ah D&D. Nothing screamed adventure like a bunch of kids roughly my age having life-threatening scrapes in the realm of only our imagination. Ranger, Barbarian, Magician… many of the classic ‘classes’ were there and each and every time the crew fought some kind of mythical beast or monster up to and including Venger, that evil fellow from the intro. I loved this show and had a bunch of the toys to boot.

Creepies and crawlies abounded in this loose adaptation of Tim Burton’s awesome Beetlejuice. Not that the toon was bad by any stretch, in fact it was actually pretty darn funny and had quite a lot of those nightmare worms and slimy things from the movie. Basically it featured Beetlejuice and Lydia running around the Netherworld getting into scrapes and whatnot. Pretty fun.

‘And Godzoooooooky!’ Absolutely the greatest part of that song. Seriously. Play it again. I’ll wait. He he he. Anyway, this show had all the cool monster baddies from the Godzilla flicks like Mothra and Rodan and featured plenty of nice Godzilla (as in he was kind and friendly) action, and that was very cool indeed.

Ah yes, a monster of the ghostly variety. Ok, gimme a break, do you have any idea how tough it was to find monster themed cartoons? Well, kinda. That’s how. Anyway, this basically featured much of the same shenanigans that Scooby Doo and all the other Hanna Barberra lot featured, except in this instance we have the trio befriending a ghost of a Revolutionary War soldier and his cat. Cool.

Boy, that HB Scooby-Doo-esque formula sure filled in a lot of cartoons, didn’t it? This one is vaguely similar except for the obvious inclusion of a werewolf into the mix. Anyway, I just watched this the other day on Boomerang and I have to say, it still holds up pretty well despite its dated feel. Oh well, fun stuff regardless.

You have GOT to love YouTube! I struggled for hours the other day trying to come up with this gem, and here ya go! Once again, adhering to the ‘Three Teenagers’ story base, we have the requisite group in this monster toon who can turn themselves into a Frankenstein, Werewolf, and sassy Dracula to fend of evil. So cool that I even remembered this. FTW!

Not only did this sweet toon have the original Ray Parker, Jr. theme, but it featured every single character from the movies up to and including the real star of the show, Slimer. Monsters were always wreaking havoc in this toon, often in the form of ghosts, hence the name. The guys would suit up, grab their proton packs, and kick ass every episode. Awesome.

Take Duck Tales and toss in a fine mix of the morbid and horrific and stir well: Count Duckula is what you get. Made by the same British folks who did Dangermouse, Count Duckula was on for quite a bit here in the states and I do remember watching it as often as I possibly could. What’s funny is just how similar to Daffy Count Duckula looked, at least in the face. Ducks are cool.

The best of the themes from a myriad different Scooby shows from over the years for sure. This show featured nothing but monstrous things doing evil stuff each and every episode. It never failed that once the gang discovered that, more than likely, the Swamp Monster or what have you wasn’t actually a monster, they’d trap it with a series of Scooby and Shaggy-set Rube Goldberg-esque nets or cages and remove the mask to the utterance of, “Yeah, and I’d have gotten away with it, too, if it hadn’t been for you meddling kids.” Great stuff.

Absolutely without a doubt number one. This show was so incredibly campy and cool all at the same time. Watching the three of them run for whatever reason was always my personal highlight, as you can see from the intro there: Frankie all stiff-legged, Drac all prim and proper holding his cape like a glider, and Wolfie on four legs. It made me bust up each and every time. Ah, memories. Oh, and did you know this is the place Sabrina the Witch got her start? Yup.