The Guide to the Perfect April Fools’ Day (for Amoral Sociopaths) 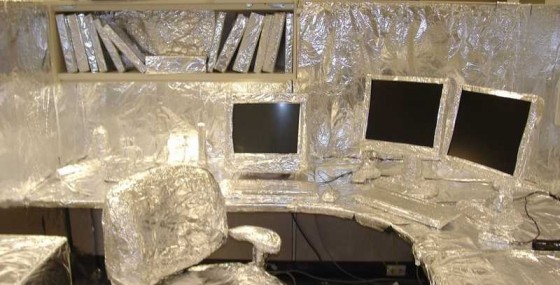 Let’s face it: most April Fools’ Day jokes suck. It’s tough to think of a good prank, and even tougher to think of a practical one—we’d all love to add a giant erection to the Jefferson Memorial statue, but we just don’t have that kind of time.

So you turn to the Internet, hoping it can provide you with blueprints for a simple, funny prank. But the Internet’s ideas are terrible: set someone’s clock ahead? Put a rubber band around the sink nozzle? Come on Internet, it would be more of a prank to just kick our friends in the junk.

Luckily, Gunaxin is here to help. We’ve made some simple modifications to “classic” pranks that turn them from humdrum to hilarious—and all you need to pull them off is a little spare time, a can-do attitude and a complete lack of common decency.

“Is your refrigerator running? Well then you better go catch it!” is a prank call you might find hilarious, if you’re a six year old boy from the 40s with Down syndrome.

“You’re looking for Mike Hunt? I’m afraid there’s no one here by—oh, I get it! You crazy kids and your wordplay! Now please don’t call me again until you can think of a joke I haven’t heard a thousand fucking times already!”

Sadly, the amateur prank call hasn’t progressed much since those days, but we’ve got one that will produce endless laughter! Just follow along with the script we’ve prepared:

You: Hello, *insert victim’s name*, I’m Officer Wescott. I’m afraid I’m going to need you to come down to the police station to pick up your husband.

Victim: Is my husband in trouble?

You: Oh no, not at all. He was just in a little traffic accident.

Victim: A traffic accident? Is everything alright?

You: Well, there are a couple of dents and the paint is scuffed up, but it’s nothing that can’t be fixed.

Victim: No, I mean, is my husband alright?

You: Oh, of course! Ha, silly me! No, your husband will never walk again.

You: No, he’s dead. Sorry, I probably should have skipped straight to that.

At this point, your victim will wail in anguish for several minutes. Wait for them to run out of tears, and then…

Victim: Oh, you and your wacky pranks! You sure had me going!

Then the two of you will share a hearty chuckle, and your relationship will become stronger. After all, the best jokes are the ones where you laugh with your target, not at them!

Of course, this script is just a template. Your victim could be another family member, a friend, or even a complete stranger! And if you think the “fake traffic accident” gag is too cliché, then try substituting it for a drive by shooting, or a grizzly bear attack. What’s important is that you have fun!

Every April Fool’s Day, thousands of office workers around the world hear their boss say, “Oh look, you wrapped my office in tin foil. Again. Hilarious.” It’s the oldest trick in the office prank book, and by this point in the game it’s about as creative as a Black Eyed Peas album.

“Yeah, that’s really funny, guys. By the way, 1973 called, they want their fucking joke back.”

But the fundamental concept of coating an office in something is sound; you just need to use a different medium.

So if not tin foil, then what? Post-it notes? We want more creative, not less. Wrapping paper? Are you even fucking trying?

No, you’re going to coat your boss’ office in spiders.

If you’re one of the few people who doesn’t keep a swarm of spiders handy, try buying in bulk from your local pet store. The kind of spider you use is up to you, but, generally speaking, bigger and more poisonous equals funnier.

Your arachnid hoard should number in the hundreds, or, for a large office, the thousands. For the best results, find a way to release them after your target enters the room (an air vent works well). Otherwise the spiders might wander off, or your victim might have the chance to ruin the prank by calling an exterminator.

Be sure to get to work early, so you have time to prepare. When your boss enters his office, wait until he closes the door, then release the spiders. You’ll know your prank worked when you hear him say, “Agh, spiders! My only weakness! My God, there’s so many of them! Whoever thought of this hilarious prank is a genius that deserves a promotion! Oh no, they’re eating my eyes! Tell my wife I died a hero!”

See? Comedy gold. Just remember: the best kind of prank is the safe and responsible one, so make sure the spiders are rounded up and released into the wild when you’re done with them. There’s no need for cruelty!

You’d think that the emergence of computers would have given us access to all sorts of exciting new pranks, but so far we’ve been limited to putting masking tape under somebody’s mouse or changing their desktop background to gay pornography. Pretty boring, right? Don’t worry—we’ve got a computer prank far more nuanced than that.

It’s even more ingenious than the brilliance contained on this disc.

This is a great joke to play on your best friend, because it will be easy to get access to their computer. And all you need is a USB drive full of child pornography, bomb making instructions, blueprints of Government buildings and al-Qaeda propaganda. Since you have an Internet connection, you can acquire all of that with ease.

This is a good place to start.

Go visit your friend and, when he’s not paying attention, transfer everything from your USB drive to his computer. Next, call the police and tell them you’d like to report a dangerous criminal. Then just kick back and brace yourself for all the laughing you’ll be doing!

Now, some of you may worry that the police won’t react kindly to being unwittingly used in a prank. Well put those worries aside, friend: the police are regular folk who enjoy a good joke as much as we do. As proof, here’s a one hundred percent genuine transcript from when we pulled this prank ourselves. Take special note of the hilarity!

Policeman: Hello, sir. We have reason to believe you’re a pedophile terrorist intent on destroying America.

Friend: Why Officer, I believe you’re mistaken! The only thing I’m less likely to be than a pedophile is a terrorist!

Policeman: If what you claim is true, then why does your computer have a folder labelled “Child Pornography, and also My Plan to Destroy America” on the desktop?

Friend: I haven’t the slightest idea! The only explanation I can think of is that I’ve been made the victim of some sort of elaborate ruse—or prank, if you will! Oh dear, you’re not going to arrest me… are you?

Policeman: Ha, of course not! Why, if I arrested you, I’d be committing the most serious crime of all—not having a sense of humor! I’m just going to beat you with my nightstick a bit for wasting my time.

Friend: But Officer, shouldn’t you beat the fellow who perpetrated this hoax? I believe he’s just upstairs!

Friend: But I—Agh! Stop beating me!