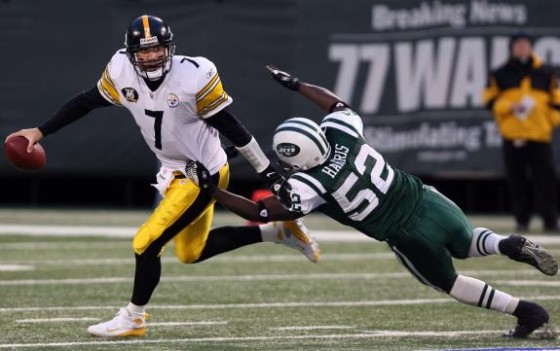 Well folks, it’s NFL Championship weekend, which means that it’s almost time to forget about football and start paying attention to our families again. Man, that sounds just dreadful, and you can’t prove the kid is ours anyway.

In any event, we’ve only got two more weekends of real, significant National Football League action, and we wanted to break down the NFC and AFC matchups so that you won’t have to, because we know how lazy you are, and that you’d rather just sit back and drink yourself stupid. Wouldn’t we all?

And now, on to the matchups!

Division rivals Green Bay and Chicago have played one another more than any other teams in professional American football history, yet somehow this is only the second time ever they’ve met in the postseason. The first meeting was on December 14, 1941, and if that matchup was any indication, we’ll be headed to war with Japan any day now.

In any event, both teams feature outstanding defenses and while the Bears have home field advantage, the Packers counter with Aaron Rodgers, who it’s perfectly okay to have a man-crush on because he’s just so awesome. Seriously, the Green Bay signal caller is quickly moving into the ranks of the best quarterbacks in the NFL and he’s doing it while not raping girls, killing dogs or soliciting sex with cell phone pictures of his dong. Truly, he’s the new breed of quarterback. 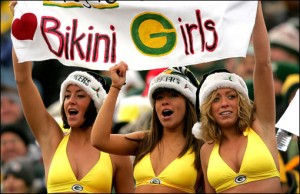 Looks like these girls are ready for a good "Rodgering." Eh? Eh?

The Bears are 5-3 at Soldier Field, while the Packers are just 3-5 away from home (including the Bears week three 20-17 victory over Green Bay). In their first meeting at Soldier Field, Green Bay was penalized 18 times, as opposed to just five flags thrown against the Bears. Could be a fluke, but then again, the same referee crew that worked that game is working this weekend’s NFC Championship. If you’re a betting man, you may want to investigate whether any of those refs owes a large sum of money to the Mafia and then wager heavily on the Bears.

The Packers may be the hottest team left playing, particularly after dismantling the NFC’s top-seeded Atlanta Falcons last weekend, but it should be noted that only once in history has a six-seed (like the Packers) reached the Super Bowl (along with the 2005 Steelers).

According to USA Today, the Packers are currently favored in the game, giving 3 points despite playing on the road. However, as both teams feature strong defenses and mediocre running games, you have to look at the quarterbacks. On the one side, you’ve got Rodgers. On the other side, you’ve got goofy douchebag Jay Cutler. Call us crazy, but we’ll ride the hot hand and stick with the Packers to head to the Super Bowl. 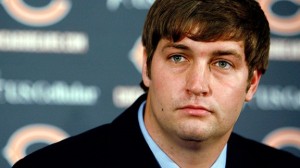 Would you trust this face with your season on the line?

A classic matchup of hard nosed defenses and controversial figures, Sunday’s second game features the trash-talking Jets traveling to the Steel City, where the Steelers are 5-3 this season and giving 3.5 points this weekend. The Jets have been stalwarts on the road this season, winning six of eight away games. 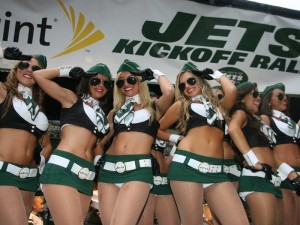 Probably because of their Flight Crew...

The Jets enter the game as the six-seed (giving us the distinct possibility of seeing a pair of six-seeds in the Super Bowl) in the AFC after finishing with an overall record of 11-5 but faltering down the stretch. However, Rex Ryan has put foot to ass in the postseason and has his boys playing well, topping the Colts and the Patriots and sparing us from seeing pretty boy Tom Brady play for yet another title. The Jets are hoping for their first Super Bowl berth in 42 years.

Of course standing in New York’s way is a Pittsburgh Steelers franchise that’s been as consistent as any over the past decade, winning a pair of Super Bowls with Ben Roethlisberger at the helm. Big Ben has a chance to become one of only a handful of quarterbacks with three Super Bowl rings, and as far as we know, the first sexual deviant to win so frequently.

On the other side of the field is Mark Sanchez, who listens to show tunes in his car. No, really, ESPN did a piece on him trying to drag his Jets teammates to Broadway musicals and he was even a presenter at the Tony Awards. Either way, the Sanchize has been wildly inconsistent in his first two seasons, at times looking great while struggling almost as often. However, with a win this weekend he’s one step closer to joining Broadway Joe as an iconic Jets quarterback. 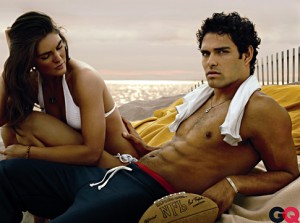 But unlike Broadway Joe, he doesn't need pantyhose to look gay

The Jets, who were featured in the HBO series Hard Knocks in the offseason, are a blustery bunch of loudmouths with the loudest trash talking coming from head coach Rex Ryan, who has gained fame for not only putting his own foot in his mouth, but as many other feet as he can get, too. Of course, that sort of intimidation tactic (the trash talking, not the foot thing) doesn’t work on a hard nosed franchise like Pittsburgh. The key to the game will be just how healthy Troy Polamalu, who sat out the week 15 meeting between these two teams, which the Jets won 22-17. With a healthy Polamalu and the Heinz Field advantage, we like the Steelers to win and move on to yet another Super Bowl.

See you in the Super Bowl!