Sports > Football > The Heisman Trophy, what it means and where are they now?

The Heisman Trophy, what it means and where are they now? 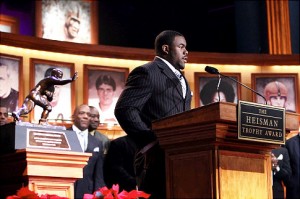 Remember last year? When the news broke that Oklahoma Quarterback Sam Bradford captured the Heisman trophy, many didn’t agree with picking a sophomore who comes from the same system that produced Josh Heupel and Jason White. Particularly with fellow quarterbacks Colt McCoy and Tim Tebow having great years. Bradford may have won the trophy, but Tebow supporters took solace in the fact Florida ran over Oklahoma to capture the national title only a few weeks later.

Well all three quarterbacks returned in 2009. And guess what? None of them won. Instead it was Alabama runner Mark Ingram who took home the Heisman Trophy. A first for the historic Crimson Tide program. It was not without controversy, however, as it was the closest vote in the award’s 75-year history. Ingram finished a mere 28 points ahead of Stanford running back Toby Gerhart, a rare breed of player in that he’s a white running back. For all the hype, Tebow finished fifth and Bradford was never in contention. Archie Griffin can

breathe a Mercury Morris-style sigh of relief as he remain college football’s only two-time Heisman trophy winner. At least for another year. Ingram’s a sophomore and will be back again next year. So too could Bradford, although early indications are that he plans to enter the 2010 NFL Draft.

How Bradford and other Heisman hopefuls fare in the NFL is a whole nother question. In the last decade or so, the award has morphed from the best college football player award into an award simply given to a QB on a top ranked team. The fact Ingram broke that streak is somewhat refreshing. But it’s probably just a hiccup in a quarterback dominated award. The real question is, what does the award mean for NFL success? The answer is unclear. Football is the ultimate team game, and  it is often difficult to separate an individual’s success from that which can be attributed to being on a superior team, surrounded by better talent, or the simply in a system suited to one’s skills. After all, Tim Tebow comes from the same system that tricked NFL executives into making Alex Smith the #1 overall draft pick.

Granted, being an outstanding NFL player is not a requisite of a outstanding college player. It’s possible to simply be better suited for the college game. But NFL failure is often a clue that a player was overrated in college, either through a superior supporting cast or a better system that dominated weaker opponents.

To show how meaningless the Heisman can be, we look back at the last twenty years of winners, how they fared in the NFL, where they are now, and notables who came close to winning in their respective years.

NFL Career: One of the greatest, if not the greatest, running backs of all time. Sanders spent 10 years in the NFL and made the Pro Bowl all ten times. And he did it for a generally terrible Detroit Lions team. A 6-time first-team All-Pro, he was the 1997 NFL MVP with Brett Favre. Sanders abruptly retired after the 1998 season, leaving him short of several career rushing records.

Where are they now?: A retired NFL star, he spends time golfing and working for charities. You can also see his website here.

Notable Players on Heisman Ballot in the Top 5: Troy Aikman (3)

Where are they now?: Ware is part of the Houston Texans’ radio broadcast team and co-hosts the morning show on Sports Radio 610 AM

Notable Players on Heisman Ballot in the Top 5: None

NFL Career: The draft only goes 7 rounds these days, so NFL gurus basically thought little of Detmer coming out of school. If you think of that and not his Heisman trophy, his 14 total seasons seem impressive. Detmer finished with 54 games played (including 25 starts), totaling 6,351 yards passing with 34 touchdowns and 35 interceptions.

Where are they now?: He works for Triton Financial as Senior Vice President of Player Relations.

Notable Players on Heisman Ballot in the Top 5: Raghib Ismail (2)

NFL Career: Howard’s performance as a receiver was sub-par, but he excelled as a punt and kickoff returner throughout his 11 year career. He was a one-time Pro Bowler and won Super Bowl MVP with the Green Bay Packers.

Where are they now?: Howard now works for ESPN as a college football analyst.

Notable Players on Heisman Ballot in the Top 5: Ty Detmer (3)

NFL Career: Torretta threw a total of 16 passes in his NFL career.

Where are they now?: He works in the institutional and high net worth marketing team of Gabelli Asset Management. He is also Chairman/CEO of Touchdown Radio.

NFL Career: None. A two sport star, Ward was chosen in the 1st round (26th overall) of the 1994 NBA Draft by the New York Knicks. NFL teams were not willing to compete with that commitment, and Ward went on to a 13 year NBA career.

Where are they now?: The Head Football Coach for the varsity boys football team at Westbury Christian School.

Notable Players on Heisman Ballot in the Top 5: Marshall Faulk (4)

NFL Career: Salaam ran for 1074 yards and 10 TDs in his rookie season, but totaled only 610 yards and 3 TDs the rest of his career. Problems with injuries and fumbles led him to spending only three years with the Bears, and he was effectively out of the league after that.

Where are they now?: He lives in San Diego and promotes mixed martial arts events in China.

NFL Career: George’s career saw him run for 10,441 total rushing yards, mostly for the Houston Oilers/Tennesse Titans organization. He scored 78 touchdowns. Although not flashy, George managed to plug away for one of the better running back careers.

Where are they now?: George served as a pre-game analyst for the 2007 BCS Championship Game and with his wife Taj starred in the TV One reality series I Married A Baller.

Notable Players on Heisman Ballot in the Top 5: Danny Wuerffel (3)

NFL Career: Most draft experts were surprised when Ditka’s Saints took Wuerffel this high, but he managed to hang around for six years even if only as a back-up. That time included 10 forgettable starts.

Where are they now?: Wuerffel works at Desire Street Ministries, a non-profit faith-based organization, and also speaks to college groups.

NFL Career: A 5-time Pro Bowler and 1-time first-team All-Pro, Woodson has had a prosperous 12 year NFL career, accumulating 43 career interceptions. And he’s not done yet. He’s in the discussion for the 2009 NFL Defensive Player of the Year.

Where are they now?: Starting cornerback for the Green Bay Packers.

NFL Career: Mike Ditka traded an entire draft to obtain Williams, and the Redskins parlayed the picks to land Champ Bailey and Lavar Arrington among others. He wasn’t worth it, but he’s been a pretty good RB when not high or suspended. He led the league in rushing in 2002, when he also was selected first team All-Pro.

Where are they now?: Back-up running back for the Miami Dolphins.

Notable Players on Heisman Ballot in the Top 5: Donovan McNabb (5)

NFL Career: Dayne is seen as a draft bust due to the Heisman win and high draft status, but managed to hang around for 8 years and score 28 TDs. That’s not a bad career for a running back, just not star-worthy.

Where are they now?: Dayne has been trying to hook on with a NFL team after playing with Houston in 2007.

NFL Career: Weinke’s older than the normal draft pick due to his minor league baseball career. A long-time NFL back-up, Weinke has started 20 games in his 6 year NFL career, although 15 of those starts came in his rookie season. A dubious distinction, he holds the NFL record for most consecutive losses by a quarterback in a season, at 14, as well as overall, at 17.

Where are they now?: Like Ron Dayne, Weinke last played in 2007 and remains unsigned.

NFL Career: An option quarterback in college, Crouch was drafted by the St. Louis Rams as a wide receiver. He was cut before the season, and caught on briefly with the Green Bay Packers before again being released. In 2005, he signed with the Kansas City Chiefs and played safety in NFL Europe where he recorded 25 tackles and 2 passes defended. He has never appeared on an active NFL roster.

Where are they now?: Crouch was drafted by Team Texas in the upstart All-American Football League.

NFL Career: A 2-time Pro Bowler, Palmer has thrown for 107 career TDs and owns a 88.3 career passer rating. He’s one of the best QBs in the NFL when healthy.

Where are they now?: Starting QB of the Cincinatti Bengals, when healthy.

NFL Career: White signed with the Tennessee Titans for a brief period, but never appeared on their active roster.

Where are they now?: Owns and operates A Store Divided, an Oklahoma/Oklahoma State memorabilia shop.

NFL Career: Leinart started 11 games for the Cardinals in his rookie season and had a relatively strong year given the circumstances. In the two years since, he’s started 5 games and has been replaced as the starter by Kurt Warner. To date, Leinart has thrown more interceptions than TDs, and owns a 72.2 career passer rating.

Where are they now?: Back-up Quarterback for the Arizona Cardinals.

NFL Career: Bush was hyped as a true difference maker, maybe in the mold of Barry Sanders. After a year of anticipation, he was shockingly passed over with the first overall pick. The Houston Texans instead favored DE Mario Williams. In hindsight, it appears the Texans made the right move. Bush has not been a successful runner at the pro level, but remains an excellent receiver and electric punt returner. Given space, he’s one of the most exciting players in today’s NFL. He’s been plagued by some minor injuries, but has managed 30 TDs in almost four seasons.

Where are they now?: Running Back for the New Orleans Saints.

NFL Career: Smith is in his third year with the Baltimore Ravens. He sat most of his rookie season, but appeared in four late games, throwing two scores and running for another. After being considered to start for Baltimore coming into 2008, he lost the job to rookie Joe Flacco after he became ill with a rare case of tonsillitis.

Where are they now?: Back-up Quarterback for the Baltimore Ravens.

Where are they now?: The first sophomore to win the Heisman Trophy, Tebow is currently a senior with the Florida Gators. He’s been a member of two national championship teams, and will finally head to the NFL after the end of the collegiate season. Once projected as a second day pick at best, Tebow now looks like a potential first rounder. Whether that means professional success or not, only time will tell.

Notable Players on Heisman Ballot in the Top 5: Darren McFadden (2)

Where are they now?: As a redshirt sophomore, Bradford opted to not declare for the NFL Draft in 2009 and instead returned to Oklahoma for his junior year. It did not go well, as Bradford suffered through an injury plagued season.  In fact, his entire post-Heisman career hasn’t gone too well, as he promtly lost the BCS Championship to Florida in a clash with 2007 Heisman winner Tim Tebow before his disappointing 2009 season. 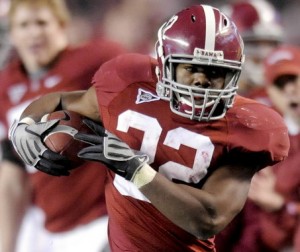 Where are they now?: Ingram should thank Tebow for breaking the “Sophomore Heisman Winner” barrier. As a true sophomore, Ingram has to wait another year before trying out the NFL. In the immediate future he’s heading to the BCS Championship to battle Texas and two time near-Heisman winner Colt McCoy.

For more Heisman goodness, check out the 16 Greatest Moments In Heisman Trophy Posing History over at Busted Coverage.