Grub > Liquor > The History Behind Eight Brands of Booze 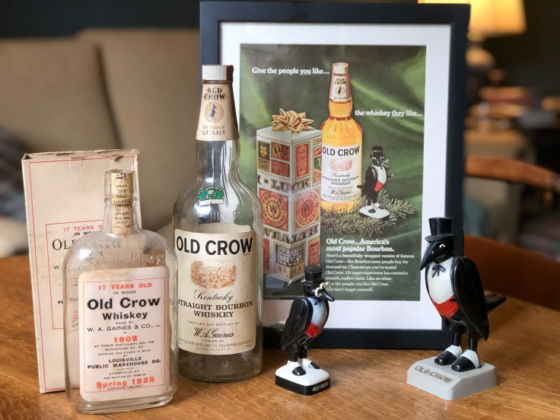 In continuing with our long-standing tradition of giving you, the reader, nothing but the goods on as much stuff you love to shove in your eat hole as humanly possible, we’d like to present you with the third in our, “The History/Story Behind” articles and offer up booze! Before, during, or after, we highly recommend you drop everything you’re currently doing and stop by the others in the series: “The History Behind Ten Famous Beers” and “The Story Behind Some Famous Cereals” because we all know you have nothing better to do so you might as well get some learn on. Enjoy!

When it comes to imbibing the hooch, you really only have three classes of options: beer, wine, and (drum roll) booze. Yes, each one can be broken down into a plethora of choices within each class, but the one we want to focus on today is booze and its one of many sub-classes: whiskey. So what specifically is whiskey besides that bottle of brown liquor you suck from every Saturday night to, “kill the voices”? Well, smart ass, I’ll tell you. According to our heroes at Wikipedia:

Whisky (Scottish English) or whiskey (Hiberno-English) is a type of distilled alcoholic beverage made from fermented grain mash. Different grains are used for different varieties, including barley, malted barley, rye, malted rye, wheat, and maize (corn). Whisky is aged in wooden casks, made generally of white oak, except that in the United States corn whiskey need not be aged.

Now you know why you black out for a few hours after swimming back a few fifths, lushy. So let’s take a trip down “Learn Something Lane” and take a good look at eight different whiskeys and from whence they came. Hold hands, this is a dangerous neighborhood. 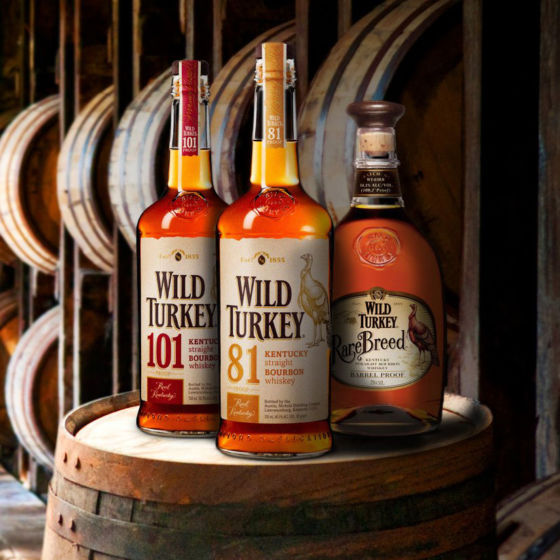 This delicious kick in the mouth is a is a brand of Kentucky straight bourbon whiskey distilled and bottled by the Austin, Nichols division of Campari Group. Now, as any good whiskey drinker will tell you, most of what you’re getting is 80 proof, that is to say, 40 percent alcohol. Wild Turkey, on the other hand, is 101 proof, or 50.5 percent al-key-hol, just right for your party featuring you, some douchbags, and a shitload of under-age chicks. If you’d like to sound really cool, head into your local booze proprietor and ask for any of the following: “The Dirty Bird”, “Gobble Gobble”, “Bombed Tom”, “Thunder Chicken”, “Boat Gas”, “Whiskey Tango”, or “The Kickin’ Chicken”, as these are cute little nick names for said bourbon! See, isn’t this fun?

As for the actual history of this infamous swill, as it turns out in 1940 -when the first batch was made and slowly introduced- Thomas McCarthy (the distillery’s chief exec.) took a few bottles on a -wait for it- turkey hunting excursion. Seriously. Soon, all of his wicked sloshed buddies were begging him for more of that, ‘wild turkey’ whiskey. Pretty cool. 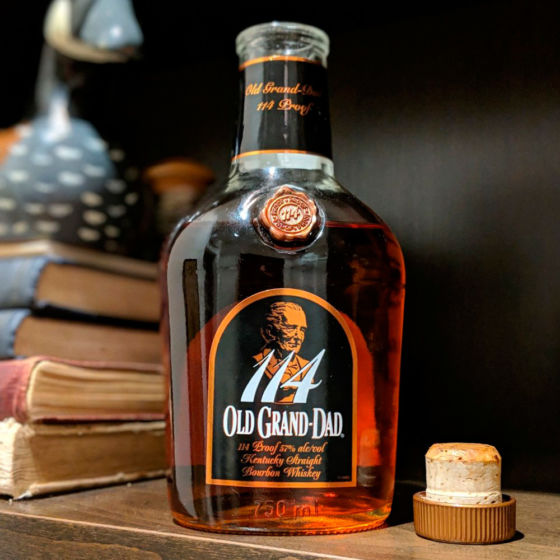 Everyone knows Jim Beam as one of the country’s leading ways to get you completely tore up from the floor up, and as it turns out, they have a strangle hold on a few other brands as well. Including this very brand right here: the often storied and much maligned Old Grand-Dad. This particular whiskey is of the ‘Kentucky Bourbon’ variety, much like most of these on here, and is distilled at the Booker Noe Plant. Despite the fact that (or possibly because of it) Old Grand-Dad has garnered a bit of a sarcastic implication, today, it is one of the ten best selling straight whiskies coming in three different bottling proofs: 86 proof, 100 proof “Bonded,” and 114 ‘Barrel Proof’ in a short height but finely designed bottle, often found at holidays in a gift box package.

According to Wikipedia, “Old Grand-Dad is featured prominently in the opening scenes of “Bad Santa”, and in the Nick Stefanos novels by George P. Pelecanos, as well as in John Hawkes’s classic novel Second Skin. It is also legendary Penn State football coach Joe Paterno’s favorite drink, and he has one on the rocks after each game. George Thorogood referenced Old Grand-Dad whiskey in his hit song “I Drink Alone”, when he sang “…the only one who will hang out with me is my dear Old Grand-Dad…” Nice. 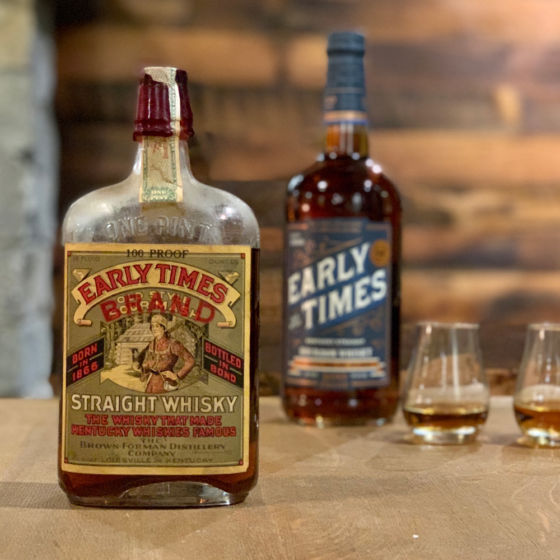 With a solid, booze-headache inducing name like ‘Early Times’, you just know this drink’s bound to be rife with cultural connections. As previously eluded to, this particular brand of Bourbon-style Whiskey (Bourbon-style outside of the United States, curiously. Just Whiskey within) is also produced in Kentucky and was once distilled at a place called Early Times Station. Sounds like a kid’s show hosted by some washed-up rock star, doesn’t it? But, as we all know, Prohibition made a royal mess of things for a bit.

According to those smart folks at Wikipedia, “After the end of Prohibition[citation needed], The Brown-Forman Company acquired Early Times in 1923, and over the next 30 years made Early Times the best-selling whiskey in the country. Today it is sold in over 40 countries around the globe. It ranks as one of the top four selling bourbons in the world and the top selling whiskey of any type in Japan.” Those wacky Japanese will drink anything! 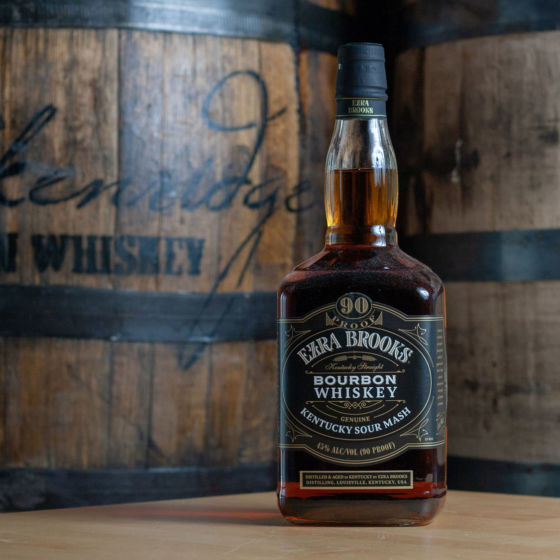 The Ezra Brooks brand is owned by Luxco of St. Louis, Missouri. (formerly the David Sherman Company); which doesn’t own a distillery. Ezra Brooks is distilled, aged, and bottled in Kentucky by Heaven Hill Distilleries for Luxco. The label itself has previously been compared by its own print advertising to Jack Daniel’s and used to be distributed in elaborate decanter-like bottles. It is still bottled at 90 proof but is no longer distributed in bottles that resemble decanters. It used to be sold in bottles with a cork cap, but now has a plastic replic-cork. The nature of its aging and the time over which it is aged combine to give it a rich, dark brown color that is visible through the bottle. 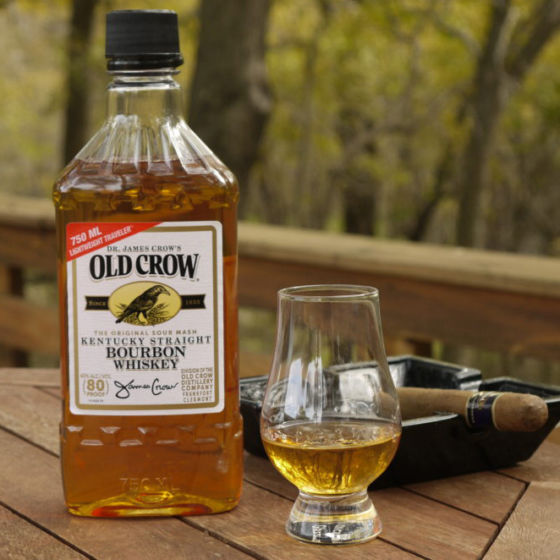 Somehow, when you come up with a name as distasteful as ‘Old Crow’ for yet another type of Kentucky Bourbon Whiskey, you just instantly conjure up images of dirty old women hanging out in their cat-infested shit holes swimming their sorrows away while they watch their soaps. But oddly, it was actually named after a Scottish immigrant named James Crow who started distilling the brand in the mid 1800’s. The younger his whiskey, the more apt he was just to call it, ‘Crow’. As it aged, however, it became what was and is known as, ‘Crap’… I mean ‘Old Crow’. Makes sense. He’s also known for adapting the first sour mash process, which is the act of, “using material from an older batch of mash to start fermentation in the batch currently being made, analogous to the making of sourdough bread.”

As it turns out many famous people have drowned themselves in a few swigs of this particularly inexpensive whiskey, including Ulysses S. Grant. A famous story (from Wikipedia) about Grant and Lincoln goes like this: Grant was an infamous drinker during the war and during his presidency and this particular bit of lore has the general’s critics going to President Lincoln, charging the military man with being a drunk. Lincoln is supposed to have replied, “I wish some of you would tell me the brand of whiskey that Grant drinks. I would like to send a barrel of it to my other generals.” Good times. 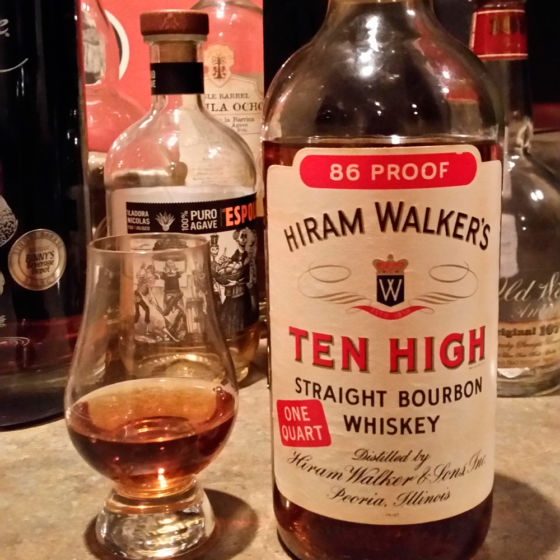 Since the Wikipedia entry for this bitchin’ fella is about as lean as they come, I decided to turn to the actual web site of the distillery, bartonbrands.com. Do stop by, won’t you?

Um, as it turns out, their own site has even less information on the history of the drink. Maybe they’re ashamed. I know I’d be if my name was ‘Ten High’. It sounds like what happens to your toes after choking down a bottle of this rotgut. Get it? TEN HIGH? These are the jokes, son. Anyway, here’s the skinny:

A quality sour mash whiskey that maintains a wealth of tradition and craftsmanship. Ten High is carefully distilled, and matured in white oak barrels, to create a smooth, distinctive bourbon. 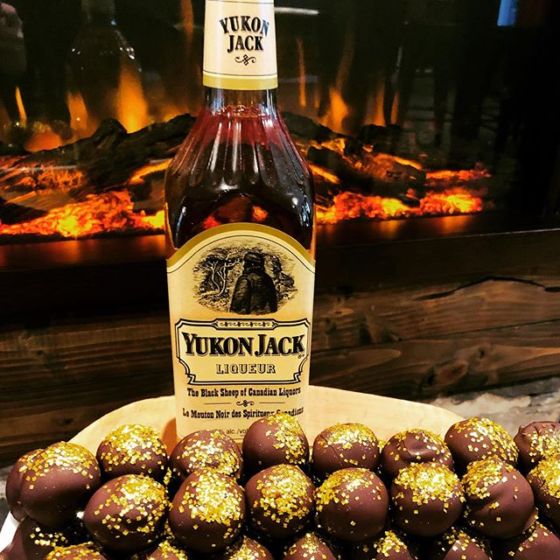 Talk about famous boozes. When’s the last time you heard Yukon Jack used in any context other than when describing the very reason why you either woke up with a blinding headache, or woke up with a blinding headache asleep in a strangers bathtub. This stuff is notorious for its drunk-inducing mishaps and as it turns out, there’s a very good reason for that. For the answer, we turn to Wikipedia:

Yukon Jack is a “honey based Canadian whiskey advertised as the “Black sheep of Canadian Liquors”. It is a 100 proof (in USA) or 80 proof (in Canada) drink, known for its “macho image”

Macho? Image? What is this the drink of choice for the Village People? Macho is such a… not macho word. Macho. It sounds like a plate of mostly fake nachos. “Sorry Earl, we’re out of chips and cheese, but I can make Ritz and crushed-up Cheetos… ya know, machos?” Oh, and speaking of macho, the label itself is purportedly Jack McQuesten. It is supposedly an artist’s inspired rendering of McQuesten, trudging through the snow all bundled up in a parka, that is featured today on the label of bottles of Yukon Jack. I don’t know who Jack McQuesten is, but I bet he was macho. 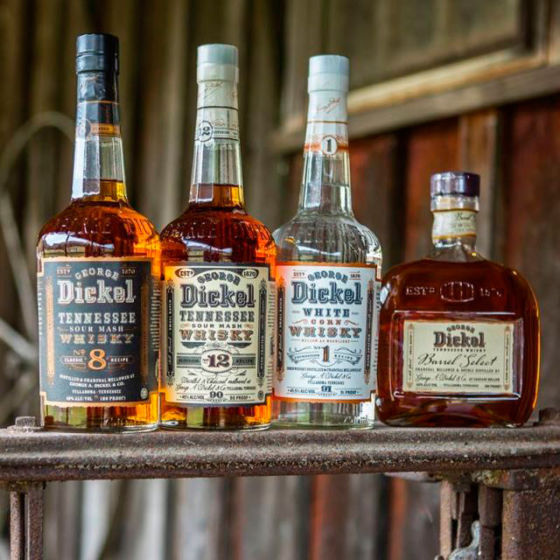 Sounds like a horse that never wins. Poor Old Number 8… gotta put ‘im out ta pasture. Anyway, this, being the final entry in this episode’s lesson, is actually the only non-Kentucky variety in the bunch. But not to stray too far away, this one’s distilled and bottled in Kentucky’s lover, Tennessee at the George Dickel Distillery in Cascade Hollow.

The history of this particularly whiskey is long and storied as well, but the real interesting part is that one of the brand’s past owners, the Schenely Distilling Company, attempted, in the ’40’s, to buy Jack Daniel’s. Obviously this offer was turned down so the company attempted to return to its roots and begin the process of making a whiskey to compete with JD. After a few ups and downs, the popularity of the Old No. 8 brand has, in some markets, exceeded Jack perhaps due to its cheaper price tag. Whether its the taste that wins is still left up to the drinkers. Frankly, they both taste like furniture stripper.