The History Behind Ten Famous Beers 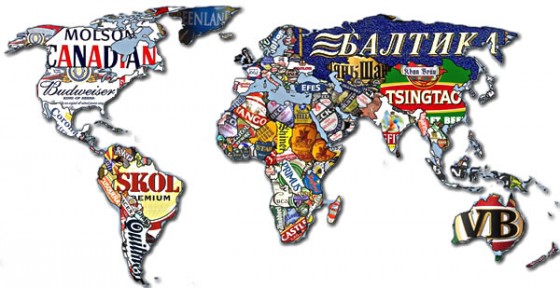 According to our calendar, today is International Beer Day. So we thought it would be fun to celebrate by looking at the history of some beers from around the world. When your favorite beverage is beer, it’s nice to know a little about some of the classics. There’s no reason why you can’t sit back while enjoying a frosty mug and read up a little, right? Fortunately for all of us, beer has not only been around a good long time, but just about every culture in the world has a version of its own. Let’s take a closer look at a few beers everyone should know. 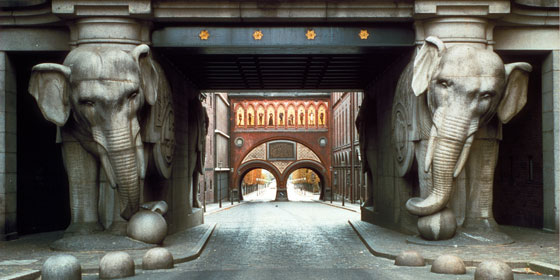 The Carlsberg Brewing Company has been around since 1847, when it was founded and named after the owner’s (J.C. Jacobson) son, Carl. As of 2009, Carlsberg has become the fourth largest brewing company in the world as it is now the mother company of San Miguel, Elephant, Chang, Falcon, Piast, Kronenbourg, and Tuborg among many others. It’s central brewery is located in Copenhagen, Denmark, and as of 1968, it has a second ‘foreign’ brewery in Blantyre, Malawi. In 2008, Carlsberg was awarded acquisition of the Scottish and Newcastle breweries allotting nearly all of their company’s holdings to be solely owned by Carlsberg. 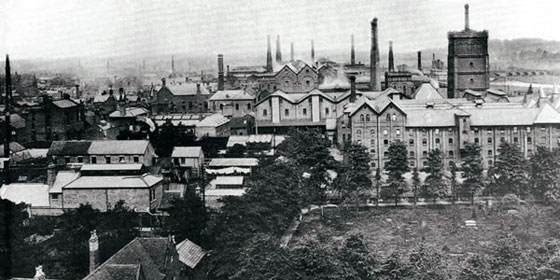 William Bass founded the Bass Brewery in 1777 giving the U.K. its first registered trademark in the label’s distinctive Red Triangle. Bass’ first beer brewed, which is still in production today using the exact same recipe, was Bass Pale Ale. In the 1960’s, Bass merged with several other brands making it the largest in the U.K. under the name Bass Charington. However, in 2000, the corporate machine known as Anheuser-Bush bought them out shipping the brands known as Carling and Worthington to Coors. Bass is still widely considered to be one of the first, and finest, classic beers the world over. Except maybe in Ireland where it has failed, twice, to gain much of a foothold. 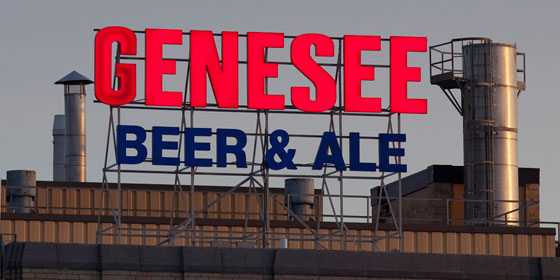 As many breweries tend to do, the Genesee Brewing Company went through its share of name changes over the years since its inception in 1819 as the Aqueduct Spring Brewery in Rochester, New York. In 1857, Rau and Reisky (the new owners of Aqueduct Spring) became Reisky and Spies, which eventually got bought by Genesee in 1932. Through buyouts and corporate mergers, the name Genesee has finally reclaimed its status as of 2007 and now produces another exceedingly popular brand that began with the name J.W. Dundee’s Honey Brown. It became an instant success and as of 2008, Dundee has become a brand unto itself producing such styles as Amber Lager and American Pale Ale. Fortunately for some, Genesee also own Seagram’s Escapes flavored malt beverages. So you have a few choices with these guys. 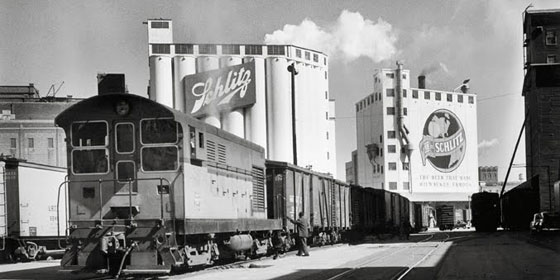 “The Beer That Made Milwaukee Famous”. Every beer lover knows that slogan, especially those who love Schlitz. In 1902, the Schlitz beer company became the largest producer of beer in the world and enjoyed that status often as it battled back and forth with the Anheuser-Bush during and throughout the early part of the 20th century. “When you’re out of Schlitz, you’re out of beer” was another of the company’s famous lines, and, sadly this ended up being the case in 1982 after crippling inter-company breakdowns. Thanks to the monster companies Miller Lite and Bud Light, Schlitz (now owned by Stroh) just couldn’t hold it’s own, especially with the original formula having been (supposedly) lost to the world. Schlitz finally died in 2001. Or did it? Finally, through research and extensive interviews with former brewmasters and employees, the original recipe was reformulated and Schlitz has enjoyed a new up surge in sales and popularity. 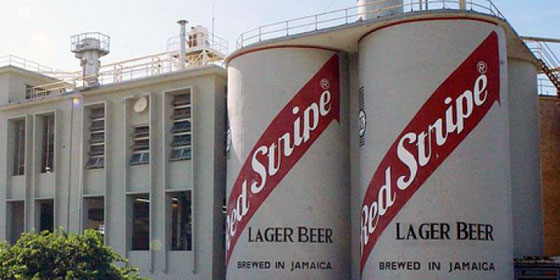 The Desnoes and Geddes Limited brewery might not be commonly known, after all it started out as a soft drink manufacturer. But now, it’s the proud brewer of Red Stripe Lager beer. Eugene Peter Desnoes and Thomas Hargreaves Geddes founded the company in 1918, and ten years later the original incarnation of the lager was brewed and deemed too heavy for the local drinkers. Ten years later, in ’38, brewers Cotter and Martindale revised the recipe to the 4.7 APV beer we know today. The beer first hit U.S. shores in 1985 where, as a standard bottled beer served in typical tall, green bottles, was not a success. It wasn’t until packers chose the squat, 11.2 ouncers we know today (in an attempt to foil would be cannabis smugglers) that the variety finally took off. An acquisition by Guinness assisted in Red Stripe’s international success and it enjoys notoriety today. “Hooray Beer!” 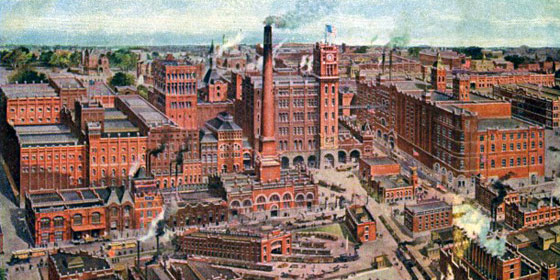 Michelob is owned by the Anheuser-Busch company, as it was developed by Adolphus Busch in 1896 as a “draught beer for connoisseurs”. It’s name is derived from a Bohemian village near Saaz that just so happens to be well known for its hops. Though it had since been around for three-quarters of a century, Anheuser-Busch finally created a pasteurized version that became legal for distribution in America in 1961. It’s original bottle design, which one several awards, was a tear-drop shape representing a water droplet. However, as its popularity increased, the design turned to standard bottles only to see re-release as an anniversary edition from 2007-08. The Michelob label brews Honey Lager, Pale Ale, Marzen, Pumpkin Spice, Winter’s Bourbon Cask Ale, and a Lite version. Thanks to the diet craze and all those folks who want their beers and to drink them, too, Michelob introduced Ultra and many flavor variants including Lime Cactus and Pomegranate Raspberry. 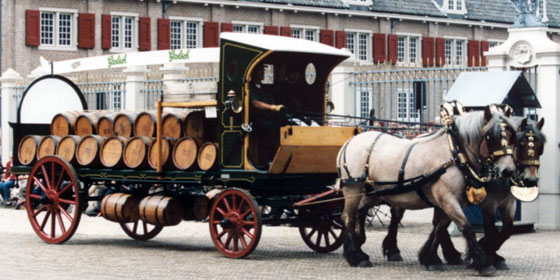 In 1615, the Dutch company known as Grolsch was founded by Willem Neerfeldt. The Dutch town of Groenlo (as it’s now called) was called Grolle, thus, Grolsch (“of Grolle”) became the new beer’s moniker. Just shy of four hundred years later, in 2006, Grolsch was the second largest producer of beer in the Netherlands after Heineken, with a yearly total of 3.2 million hectoliters. That would be a whole lot. In 2007, SABMiller (the Miller Brewing Company) bought out Grolsch and now bottles it under it’s ownership. Grolsch now brews many specialty styles such as Lentebok, Herfstbok, Pilsner, Blonde, Light, and Weizen. It enjoys it’s position as the 21st largest beer producer in the world. 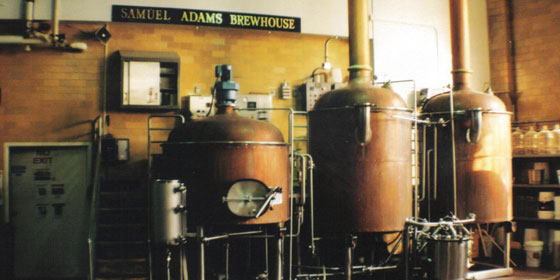 So who are Jim Koch, Harry M. Rubin, and Lorenzo Lamadrid? Well, they’re the founders of the Boston Beer Company, in Boston, Mass., bottlers of Samuel Adams. The company was obviously named after Patriot Sam Adams (and abbreviated as such) who supposedly was a brewer himself, and has since become the largest American brewing company once Anheuser-Busch was sold to InBev. 1860 marked the first year that the recipe for Samuel Adams Boston Lager was written and brewed, but Prohibition curtailed any further production until 1984 when fifth-generation Koch began reproducing the beer in his own kitchen. In 1985, Koch and company introduced the Boston Lager to the world and subsequently won “Best Beer in America” by the Great American Beer Festival. Sam Adams currently brews over 60 styles of beer each year, as their current commercial proudly points out. 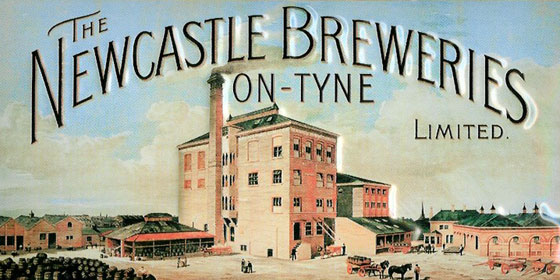 Scottish and Newcastle plc is actually a company stationed in several different countries including UK, France, and Russia, but headquartered in Edinburgh, Scotland since 1990. In 2008, a joint acquisition between Carlsberg and Heineken did away partially with the Scottish Newcastle name, which has been ultimately handed to the “Scottish & Newcastle Pub Company”. Soon, the joint company also bought the brewery rights to several ciders including Strongbow, Scrumpy Jack and Woodpecker, soon becoming the owners of the largest mills and orchards in the area. Currently the breweries make all of the following beverages: Beamish, McEwans, Newcastle Brown Ale, John Smith’s, Fosters, and Miller’s Pilsener. 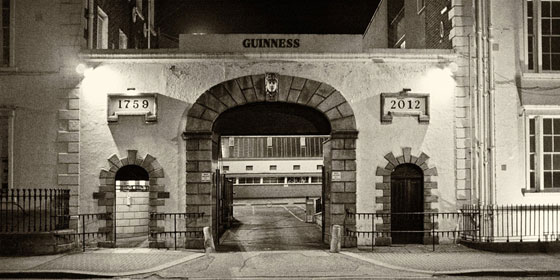 In 1759, St. James Gate Brewery in Dublin, Ireland gave the world Guinness, thanks to Arthur Guinness. In 1914 the Guinness brewery became the largest in the world, producing the largest amount of stout… as it still does. Their main product is Guinness Draught, one of the top best-selling beers -since its inception- the world-over. Today, Arthur Guinness would have been proud of St. James’s Gate. Guinness is now also brewed in 50 other countries around the world, but all these overseas brews must contain a flavored extract brewed at St. James’s Gate. So the very special brewing skills of Arthur’s brewery, remain at the heart of every one of the 10 million pints of Guinness enjoyed every day across the world.