In case you’re unfamiliar with this movie, it is notorious for the trauma and difficulties stemming from Heath Ledger’s death during production. That’s right, it’s Ledger’s last film. Although troubled production is nothing new for the former Monty Python comedy troupe member turned director Terry Gilliam. He has often made extremely expensive movies beset with production problems. Brazil and The Adventures of Baron Munchausen are two examples, but his attempt to 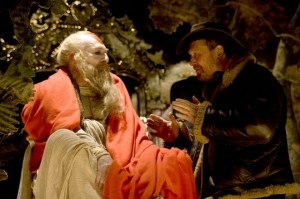 film The Man Who Killed Don Quixote was such a disaster that the film was ultimately cancelled. At least the story of the fiasco turned into the documentary Lost in La Mancha. And despite the setbacks, word is the Gilliam is stilling trying to make the film over a decade later.

Still, whatever production problems Gilliam has, he is a talented director with many quality films under his belt and a few commercial successes.  Time Bandits, The Fisher King, and 12 Monkeys are on his résumé, and he maintains the ability to crank out a great piece of work, even if he’s been in a slump for the past decade. After Ledger’s untimely death, The Imaginarium Of Doctor Parnassus looked like another troubled production destined to fail. That is until Hollywood stars Johnny Depp, Colin Farrell and Jude Law signed on to play versions of the character originally to be played solely by Ledger. It rescued the film from production hell, but whether it will work artistically is another question. Below is the international trailer for the film, and it looks pretty interesting. Let’s hope it’s a success for Gilliam. The guy deserves something good to happen to him.