(Screened at the Middleburg Film Festival on October 20th)

The Irishman finds Martin Scorsese in a reflective, pensive mode, being both a meditation on aging and venturing into seldom-traveled territory. What happens to gangsters who faithfully live up to the Cosa Nostra’s vows of silence and retribution, yet find themselves staring at death not from the barrel of a gun, but time itself? It’s a film which also mirrors Scorsese’s maturing through his cinematic life, having reached a point where he doesn’t need to do anything shocking to get our attention; he merely needs to aim his camera at this rich, engrossing story which stands on its own without his typical violent adornments. 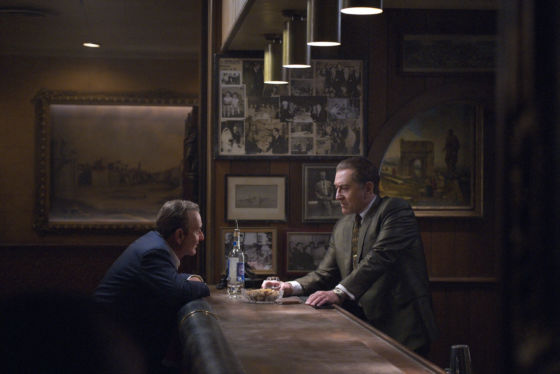 That’s not to say The Irishman doesn’t have its fair share of shocks or violence; these attributes are used more pointedly to loosely chronicle former Teamsters Local 326 president Frank Sheeran’s (Robert DeNiro) rise from lowly trucker to his unspoken job as Union messiah Jimmy Hoffa’s (Al Pacino) right-hand man. A chance meeting with crime family patriarch Russell Bufalino (Joe Pesci) kicks this story into full gear, propelling him into the mafia’s good graces and given multiple responsibilities ranging from “house painting” (explained in the opening minutes) to skimming meat deliveries to simple bribery. Yet he’s a relative pawn compared to his mob higher-ups. They skillfully position him around the board in their game of chess against other gangsters, the US government, and rival Teamster adversaries as they sit back and watch the money roll in. 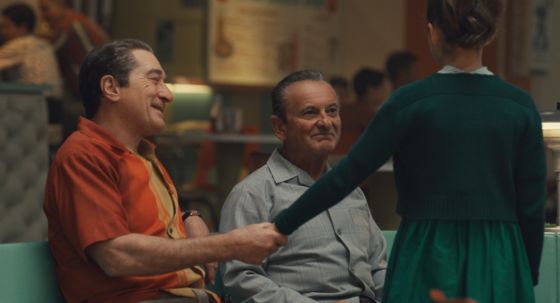 Steven Zaillian’s script – based on the Frank Sheeran-centric biography “I Heard You Paint Houses” by Charles Brandt – also taps into how families deal with men like Frank and Russell through the eyes of Frank’s daughter Peggy. Played as a child by Lucy Gallina and as an adult by Anna Paquin, Peggy is akin to Lorraine Bracco’s Karen Hill in Scorsese’s Goodfellas, witnessing her father inflict beatings and perceptively intuiting some of his more dastardly actions, but without the starry-eyed adulation or approval. On the contrary, Peggy bears all of this in a resentful silence, preternaturally knowing the crime reports she’s seeing on TV and hearing on the radio are about something her father might have done. 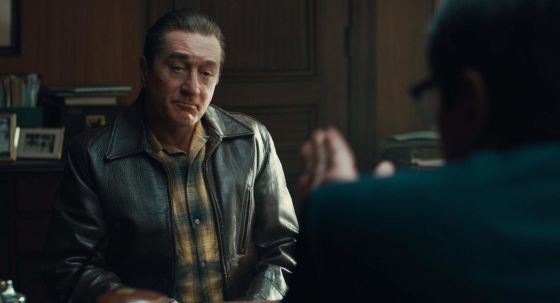 Gallina and Paquin’s portrayal of this suffering child is the unexpected emotional anchor of The Irishman, being the only non-exaggerated point of human contact for the audience. “Exaggerated” may be too strong a word, considering both DeNiro and Pesci are as normal as we’ve ever seen them in a Scorsese movie. As Frank, DeNiro cuts him from an everyman cloth, indecisive and often trepidatious about the actions Russell has him undertake. Pesci is a firebrand in this movie, electrifying every scene he’s in, but not because of the former outrageousness for which his usual characters are well-known. Instead, he’s more dangerous in his thoughtfulness, as if he knows his word is final and whatever he says will get done. He doesn’t have people killed on a whim; for this extreme, he has to be calculatedly precise about why it needs to be done. In this state, there’s an undeniable power coming from within which cannot be quantified or measured, and Pesci truly becomes a sinister character capable of making both the audience and Peggy unsettled and wary. 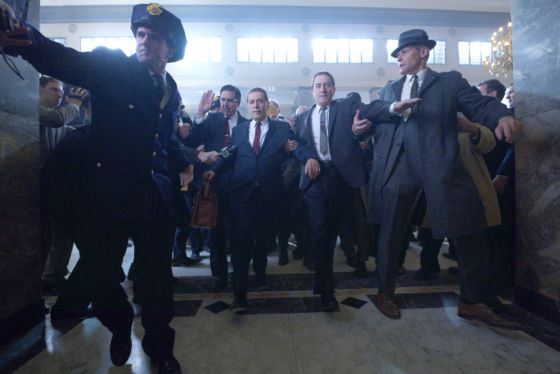 Frank’s journey up the mob ladder from wetwork to more heavy involvement in the Teamsters Union finds him at the beck and call of Jimmy Hoffa, a role which Al Pacino gives his usual enigmatic, blowout charisma. He plays Jimmy as a man who wants control, plastering over any kind of setback as a win for him with a drive and fervor seen in the best and worst of politicians. Frank becomes his personal assistant, taking care of problems with either money or a gun just as easily as sheltering Hoffa from press gangs. Pacino, as always, can be relied upon to bring the heat to the screen, and he gives the role a forthright bluster which he uses in his attempts to pour cement – and let it set while pissing on it – over the people in his way. 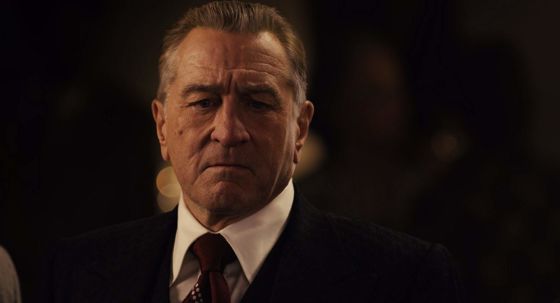 The Irishman doesn’t glorify its violent turns, opting to ply its audience with a character study of three mob or mob-associated figures trying to deftly step around their obstacles. Anything extrajudicial is dealt with in the strictest terms; there are no Tommy DeSimone-like shenanigans among these three men. One character who makes the mistake of attempting to have this wantonly extravagant kind of flair is served the most vicious of consequences, complete with Frank narrating the disturbing intricacies of his Russell-ordered punishment. Zaillian’s script doesn’t condescend during passages like this; instead, it is used to almost humanely guide us – in Scorsese’s inimitable, wryly matter-of-fact style – through the manner in which the Bufalino crew operates. 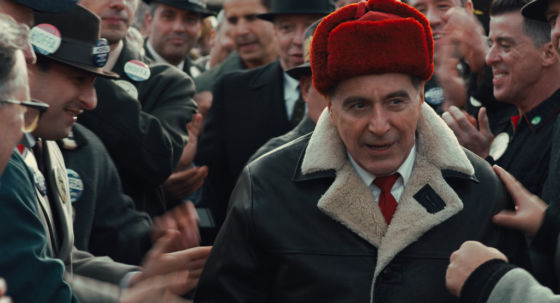 There’s a solemnity and respect with which Scorsese treats this material, evident from the film’s opening tracking shot through a nursing home, setting the heavy tone for all which follows. Director of photography Rodrigo Prieto adapts himself well to Scorsese’s trademark visual style and also injects the film with his own touch, the aforementioned respect also showing in his delicate spatial relations. Prieto often frames the film’s subjects at various heights as if to reinforce the power hierarchy in the story; take note of how the loudest character in the room is also often at shoulder height or below those truly in charge. The film’s final shot also speaks volumes about how everyone, whether mob or not, faces the same challenge of old age and death; the shot’s subject, its structural lighting, and a wall combine to hammer home this film’s metaphorical substance in a deceptively simple composition. 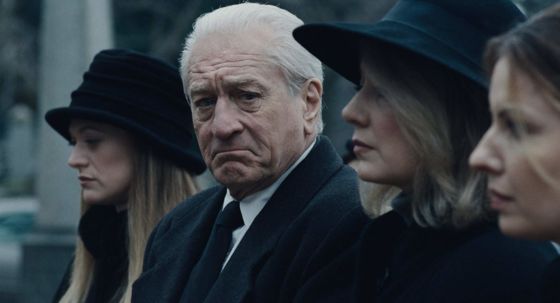 Scorsese has obviously done more kinetic and (relatively) happy-go-lucky pictures in his storied career. With The Irishman, we find him using his most steady, practiced, and mature approach to taking stock of one’s life. The result is an astounding achievement, both personally and cinematically, as the calming ways of this movie speak much more than its many gunshots and strangulations. Quiet scenes between Russell and Frank – often with Pesci only having to nod or glare wordlessly at DeNiro – are weighted carefully and gravely without many words passed. The film’s structure features present-day scenes running concurrent with the past until everything catches up, like a cross between Goodfellas and Christopher Nolan’s Memento, often throwing the audience off until they realize where and when we are. It’s this kind of subtle push-pull which Scorsese employs to keep us on our toes, especially during the film’s lengthy running time. 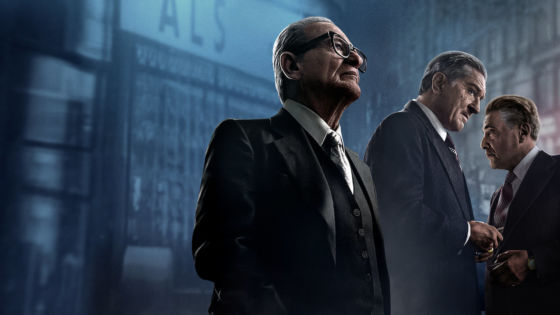 However, it’s a running time which doesn’t feel bloated or misused, as every bit is essential to defining the kind of men Frank, Russell, Jimmy, and their peers have made themselves. The process of making themselves is the milieu in which The Irishman revels, and the more humanistic, conscience-laden approach to its characters makes the mythic mob seem a little more close to home than we’re comfortable admitting. Killings and other misdeeds are not done without guilt or compunction, and the serious toll it charges is eventually paid in the slow advancement of the film’s characters throughout their later years. The Irishman dwells in this more human and identifiable set of characters, giving it a homespun, down-to-earth feel and gravitas which makes it one of Scorsese’s best.

The Irishman dwells in a more human and identifiable set of characters, giving it a homespun, down-to-earth feel and gravitas which makes it one of Scorsese’s best.