Our favorite self proclaimed guidos and guidettes from MTV’s ‘The Jersey Shore’ have given us some insight into the spikey haired, tight t-shirt, fake-n-bake, big boobed subculture. While we have enjoyed the show for its train wreck appeal new viewers may be confused by some of the terminology. To help those people out we have compiled a list of some common terms used on the show and translated them for you. We present, The Jersey Shore Dictionary of Slang:

Meaning:  a male with whom a female would be interested in pursuing a long term relationship, typically lasting anywhere from 3-5 days before the inevitable cheating and breakup.

Common usage: “My boyfriend is such a dick, I can’t believe I stayed with him for two days.”

Meaning: to describe an unattractive or undesirable female.

Common Usage: “Yo man, that one girl was so hot but her friend was busted and she kept hanging around us! It was so not awesome.”

3
Creep (creeping)
depending on the circumstances may be used as a noun, verb or adjective

Meaning: the act of pursuing a female or females for any variety of purposes from grinding to drunken sex.

Common usage: “Pauly was creeping on those girls all night, he was in full on creep mode! It was awesome!”

Common usage: “We was just out there fist pumping, beating back the music, you know, just fighting the music and pumping our fists and everyone was fist pumping….it was awesome!” 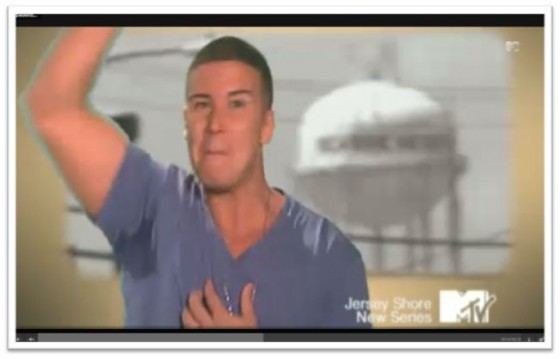 Meaning: a particularly unattractive female who must distracted by the wingman so that his fellow guido can successfully creep on her hot friend.  A grenade is not necessarily a hippo but is always busted.

Common usage: “Mike, being the good wingman he is, took the grenade for me while I was in the jacuzzi with this hot chick. He was awesome!”

Meaning: dancing with a partner in a close, sexually aggressive manner, genitals will generally make contact. Apparently however, grinding can only occur when certain music is played.

Common usage: “My boyfriend Tommy accused me of grinding some guy at the club when it was totally not true. They were playing house music and I was just rubbing myself on this guy’s crotch, it wasn’t like they were playing R&B or something.”

Meaning: a male of the species, usually identifiable by an unnatural, and likely unhealthy, orange complexion, snug fitting t-shirt with an obnoxious design, and an overabundance of hair product designed to raise the follicles of the Guido several inches  above his head in a solid, immovable mass. Can usually be found living his parents’ basement. Guidos are predominantly of Italian descent, but the species has evolved to include many other races and ethnicities.

Common Usage: “I wasn’t expecting to see so many guidos at the club last night. There was so much fist pumping going on I had to leave.”

Meaning: a female of the species whose outward markings are somewhat similar to the males. Guidettes will be readily identifiable by their exposed cleavage and/or buttocks.

Common Usage: “The guidettes really seemed to enjoy the fist pumping that was going on at the club.”

Meaning: a large , unattractive girl, typically found in the company of more desirable females. Hippos are considered busted and thus are always grenades.

Common usage: “Yo, the girl was such a  hippo that even Vinny bailed as my wingman. It was not awesome.”

Meaning: a guido who has enhanced his physique through the use of steroids, human growth hormones and perhaps by attacking and eating lesser guidos.

Common usage: “Oh my god look at those juiceheads, that is so my type, it’s so cute when they ask me to inject them with the needle.”

Meaning: the act of diverting the interests of a desirable female away from a competing guido. Committing a robbery is considered a skill and may be done even to close friends.

Common usage: “Vinny was making out with this girl, but as soon as he went to the bathroom I moved in and completed the robbery. It was awesome!””

Meaning: usually a good male friend who will assist you in meeting and hooking up with desirable females. A wingman’s duties may range from simply making the introductions all the way to taking the grenade for his friend.

Common usage: “Ronnie is the best wingman ever! Even though he wanted to creep some other chicks he stuck around and took the grenade, who was this busted hippo and never complained. He is awesome!”