The Joker Reviews The Social Network 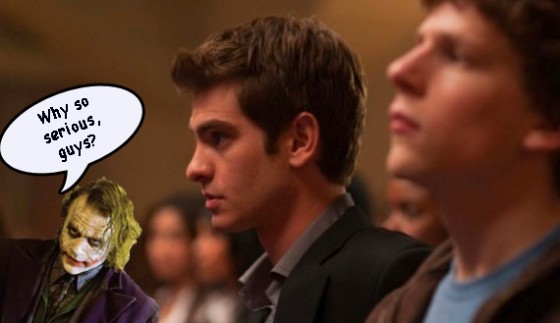 As part of Gunaxin’s coverage leading up to the Oscars on February 27th, I’ve enlisted some of cinema’s most famous characters to provide quick reviews of the favorites to win Best Picture. Last week surfing stoner Jeff Spicoli gave his thoughts on The King’s Speech. This week I’ve called upon Gotham City’s most notorious villain, The Joker, to dissect director David Fincher’s biting expose on the founding of Facebook, The Social Network. Take it away, funny man.

Alright Joker, what do you think about Facebook creator Mark Zuckerberg?

Makes sense. Was The Social Network the best film of 2010?

Okay. I’m assuming then you weren’t a fan.

Sounds like you prefer action movies, but let’s stay the course. How would summarize the plot of The Social Network?

Interesting. Do you believe Zuckerberg to be a greedy person?

Do you mean “send a message” to privileged people like the Winklevoss twins?

Did I say something funny?

I’m not sure how to respond to that.

Okay, you’re freaking me out now.

Sorry, Joker. I’m going to have to cut this short. Even though you’re a raving lunatic, I appreciate you agreeing to talk about the movie.

Whoa. That got creepy in a hurry. I may have shat myself.