The Joy of Miami’s Failure 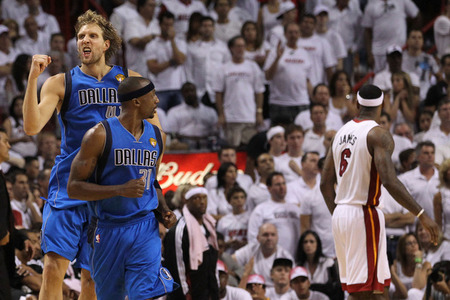 Even though only Dallas Mavericks fans had the joy of watching their favorite team win a NBA Championship this season, fans of every team outside of Miami won a small title by watching the Heat go down in flames. It was a spectacular production that rivaled their pre-season celebration, watching Miami lose three straight games, back down from every big moment, and have to watch another team celebrate a championship in their building, as their hordes of bandwagon fans abandoned their tickets to thousands of Dallas fans who filled their building.

It was a clear reminder that winning basketball isn’t about superstars decimating their public legacy to take a supposed “easy” way to a championship. It was also a clear reminder that LeBron James isn’t Michael Jordan…he isn’t even Scottie Pippen. The most talented man on the planet isn’t brave enough for the alpha dog role and doesn’t have the personality to handle being a sidekick.

It was peculiar and disappointing for LeBron to hand the reigns to Dwyane Wade once the NBA Finals started after the way he ripped through the Eastern Conference playoffs. Yet, it was baffling and pathetic for him to provide the level of effort he did in support of Wade, who left it all on the court. He let Wade and the rest of his teammates down by taking his talents and standing with them in the corner as  he watched Dallas roar back to win this series.

The Mavericks demonstrated everything that is good and holy about basketball and team sports. Dirk Nowitzki took his reputation as a soft player who faded when it counted the most and completely eviscerated it, while simultaneously throwing himself into the discussion as a top 20 player of all time. He was supported by Jason Terry, who suffered the pain of the Mavericks 2006 NBA Finals loss alongside him, and a collection of mostly veteran role players who understood and embraced their role. Everybody doubted the Mavericks throughout the entire playoffs and they hung together, remained mentally tough and proved everybody wrong.

You don’t need to know anything about basketball to see that Dallas wanted it more than Miami. The Heat were brilliantly thrown together on paper but a clumsy match on the court. A mismatched group of players who seemed perplexed at the firsthand observation of their supposed best player mailing it in.

After the game, LeBron wasn’t angry. He wasn’t Derrick Rose after the Eastern Conference Finals, simmering under the surface and counting the seconds until he gets a chance to be back on the basketball court. The King just shook his finger at all us common folk and commented he would go on living his life and change nothing about his game or approach.

We probably won’t see LeBron James ever reach his potential, which is a shame for sports fans and a shame for the concept of “talent” in general. James will likely remain a Rubik Cube to sportswriters and fans everywhere, as we struggle to comprehend what takes his over body in certain situations. Fortunately, we will also have the hungrier athletes driven by the passion and heart James lacks to continually beat him.