Media > Television > The League Season One on DVD!

The League Season One on DVD! 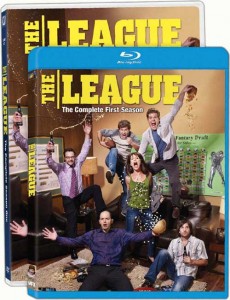 For those who haven’t seen the show. it’s a sitcom on the FX Network about a bunch of ruthless and obsessed people and their fantasy football league. With a name like Taco McArthur, how can the show go wrong? Plus you have a character named Ruxin, a defense attorney who will stop at nothing to dominate the league. Like say, getting his “friends” in legal trouble in order to help out his fantasy team.

The show stars Mark Duplass, Nick Kroll, Jon Lajoie, Paul Scheer, Katie Aselton, Leslie Bibb and Stephen Rannazzisi. The new season will premiere on FX September 16th at 10:30PM, so you can check out the six-episode first season to get caught up before the new season starts.

The bonus features included on the DVD are the Birthday Song, Andre: Dress with Style, Win with Style, Legalize Kevin’s Pubic Smoke, Alt Nation, Mr. McGibblets Fun House and Dojo, and Three Penis Wine. There are also extended cuts for all six episodes. If you’re looking for more fantasy football action and are in seven different fantasy football leagues, maybe it’s time you checked out The League. You can pick up the DVD at the FX website or on Amazon.