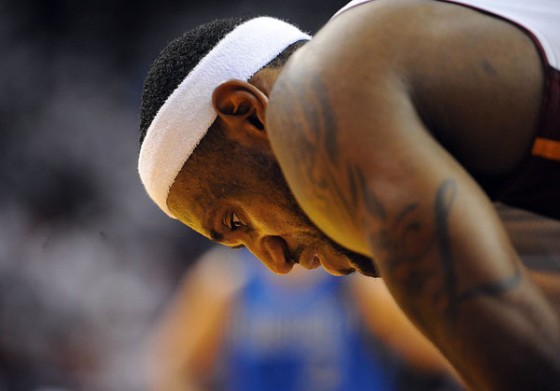 After the Dallas Mavericks claimed their first NBA title in their franchise history, you’d expect that they would be the toast of the NBA and the story dominating the NBA headlines around the world. However, when Lebron James is a member of the team that you ultimately defeat in getting to that championship prize, the headlines are ultimately going to mention him as well.

In recent history, there has been no athlete to be vilified in media  and the nature of this loss only continues to grind the proverbial salt into the wound of a player that had a city in the palm of his hand only to decide to make a bigger leap to a larger market. The media has been on Lebron ever since he was a young high school basketball player and since that point hasn’t stopped dissecting his every little move.

After the loss, bloggers and Twitters had a field day with Lebron James jokes and continued to rip into him well into the next 48 hours after questionable things appeared on his Twitter page and during his post-game press conference.  It ended up being the perfect storm of controversy: questions about how athletes perceive themselves in the world we live in, questions about closing games in the fourth quarter and whether or not, we should ever anoint someone the king of anything unless they win the ultimate prize.

In one sense, Lebron helped create the media machine that he now probably wishes never existed when creating “The Decision” and deciding during the celebration party to declare that the Miami Heat was a team that could possibly win up to six championships or more. He is a force on Twitter, which mostly gives the world a look into his everyday life and his on-going thoughts. However, that has also given the rest of the universe a platform to deliver hatred and racism his way. He opened himself to that and now has the deal with the issues that come from our 24-hour media culture.

For the Lebron James Media Machine, Lebron is the perfect mixture of hero and villain. He is arguably the best player in the NBA but also it’s most controversial as well.  So, when he fails, the media rips everything to shreds like a vulture looking for a scrap of meat in the desert and when he succeeds, he’s declared the King of all basketball players. That’s how fickle the Media Machine is, so even if you do perform to your highest potential and still lose, it’d doesn’t care. It just cares about winning.

In our society that allows us to have instant gratification, Lebron James is still looking for his in the form of an NBA championship. Until he claims that ultimate prize, the Lebron James Media Machine will not leave him alone, for better or worse.