Grub > Food > The Legend of the McGangBang

The Legend of the McGangBang 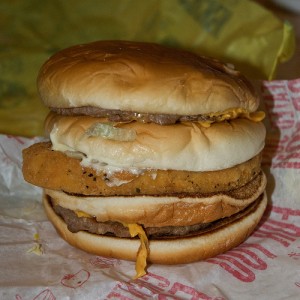 Photo courtesy of The Scrabbled

I used to be with it, but then they changed what “it” was. Now, what I’m with isn’t it, and what’s “it” seems weird and scary to me. Example 1274, the McGangBang. Now when you clicked on this link, you probably thought of something dirty and are now immensely disappointed. Still, you’re here, so why not learn something?

The premise of a McGangBang is simple. Just stuff a one dollar McChicken sandwich inside a one dollar Double Cheeseburger. What does it look like? Just shift your head slightly to the right. What does it taste like? A Dollar Menu dream and death. Mostly death. Although I’d probably eat the hell outta this thing given the chance. Damn the consequences. It’s a whole lot of sandwich for only $2, which is cheaper than most of the premium sandwiches on McDonald’s menu.

According to the lore of the Internet, this concoction originated in Daytona Beach, Florida, although they carry the Spicy McChicken instead of the normal one. My grand source on this? UrbanDictionary. Some have taken to calling the Spicy McChicken variant an Unprotected McGangBang. EatmeDaily has taken to chronicling the whole known history of the the heart attack in a hand, which you can check out over here. Suffice to say that this thing is taking off. So now you know, and knowing is half the battle. 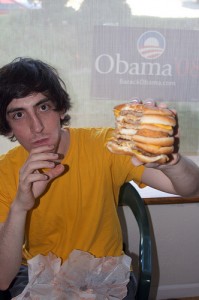 Of course innovation does not stop. Here’s Flickr user drewgstephens (aka Mike Lewis) and his Double McGangBang. It actually has two McDoubles, or double cheeseburgers, instead of one. That’s right, he’s packing five patties of meat. Sounds like an omen for Diarrhea Bear, but that’s just me.

If you pull up to your local McDonald’s, you might even be able to ask for it by name. Reports indicated that some employees are aware of the mythical beast and will gladly fill an order. And many places offer off-the-menu items, so this isn’t really any different. Of course, most people that have tried to do so have failed. But at least it spreads the word, and you can just stick the two McDonald’s treats together until the day it comes as one. Here’s one of YouTube’s best videos, with a drive-thru clerk who fills orders for them nightly :

So go forth an order yourself a McGangBang, or at least impress your friends with your knowledge of things unknown.