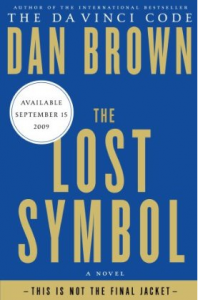 The Da Vinci Code author Dan Brown’s new book, The Lost Symbol, is now available. This is a huge boost to the publishing industry, which is suffering just like everyone else (and a huge letdown for all the trees that will be cut down).

Symbol will be the third book to involve Robert Langdon, this one about a 12-hour race through Washington DC. And get this… Random House only has an initial print run of 5 million copies. Sure, it’s only the largest first printing in the publisher’s history, but a far cry from the approximately 60.5 million copies sold of Da Vinci.

The new book was originally supposed to come out in 2006, so if there’s any justice, the three extra years that Brown had to write it will make it well worth the wait (unlike other artists who made us sit around and wait for something that ultimately sucked… AHEM Guns N’ Roses).

And by the way, if you read Da Vinci but didn’t read Angels and Demons, they’re written exactly in the same style. For some reason Da Vinci was far more successful though the books have a nearly identical pace and religious overtone. Still, both are well worth reading, particularly for people who don’t normally read (which is one of many reasons that snobby literary critics hate Dan Brown). Buy The Lost Symbol here from Amazon.