Grub > Food > The Middle of McNowhere

Ever wondered how far you had to go to get away from the ever far-reaching grasp of McDonald’s? How far did you have to go to hide from the Hamburglar? To avoid whatever the hell is Grimace? Below is a map of the continental United States, highlighted by all the many thousands of Golden Arches locations: 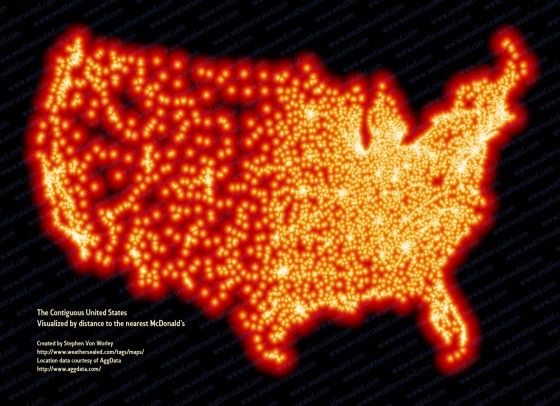 Have you had your break today? East of the Mississippi is pretty loaded, save for a couple of minor gaps in the Everglades, Adirondacks, Maine, and apparently West Virginia. Yep, there are some places even McDonald’s won’t go in West Virginia. But the biggest gaps lie to the west in places like Nevada, Idaho, and Oregon. Talk about being Munsoned in the middle of nowhere. Despite these sparse locales, however, the biggest McDonald’s free zone? A small patch in the high plains of northwestern South Dakota.

View Directions to meadow south dakota in a larger map

As you can judge from the map above, between the tiny South Dakotan hamlets of Meadow and Glad Valley lies the McFarthest Spot: 107 miles distant from the nearest McDonald’s measured as the crow flies.  A mere 145 miles in driving distance. Of course, one has to wonder if a study could be done to show how thin the folks in that area are. I’m lovin’ it! Hope they don’t have a Big Mac Attack:

Now to next step is to research the same question for Starbucks.