Humor > Lists > The Most Bizarre of Batman’s Baddies

The Most Bizarre of Batman’s Baddies 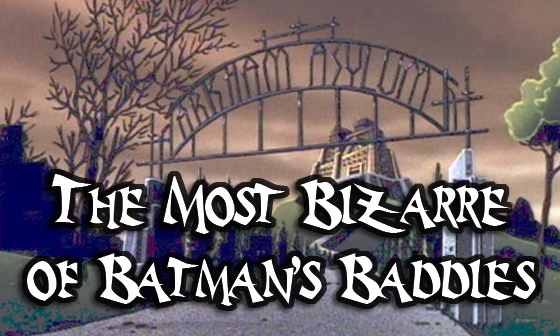 When it comes to the utter nonsense of costumed superheroes and villains, few can hold a candle to good old Batman and his ridiculous rogues gallery. When Bob Kane first introduced The Caped Crusader back in the ’30’s, he wasn’t initially given a treasure trove of hastily thrown together enemies who were likely created out of late-night Absinthe binges. But as his popularity increased, thus grew his library of thieves and ne’er-do-wells who crawled out of the woodwork to attempt to destroy him. So let’s take a look at many of the silliest enemies of the Bat and collectively wonder how he hasn’t gone ‘bat shit’ crazy. 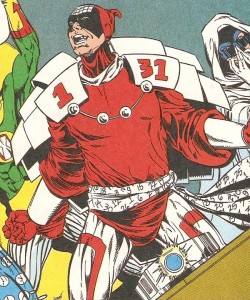 With a name like Julian Gregory Day (a total pun on Julian and Gregorian calendars), was there really any other choice but to become a psychopath obsessed with dates? I submit there was not. In fact, this lunatic even goes so far as to incorporate the specific date, day, holiday, anniversary, or remotely connected time line into the very crimes he commits. So, if it happens to be National Jelly Donut Day, Batman can expect some kind of Dutch pastry-related incident possibly involving a Jam Cannon. Wow. 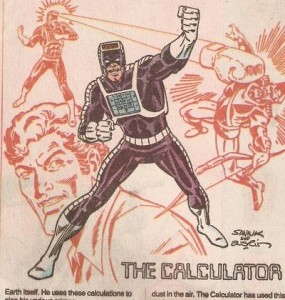 Though plotting your criminal exploits based on specific dates seems exceptionally ridiculous, at least Calendar Man doesn’t dress like a calendar. Calculator, however, didn’t attend the Subtlety Meetings and thus wears a huge calculator around. Apparently, his costume is able to create Hard Light constructs (items made from sold light?) and also reads the strengths of the person he’s currently fighting and effectively prevents him from ever being hurt by that person again. Like a booster shot, I guess. 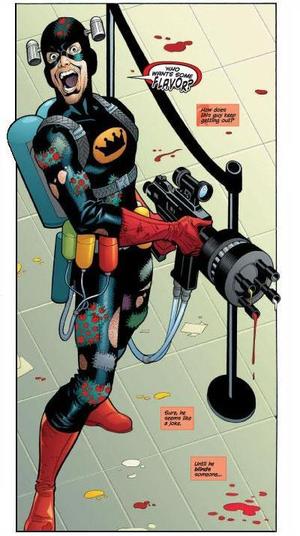 Who honestly thinks it’s even a slightly bright idea to turn otherwise innocuous items like relish and honey mustard into weapons of mass destruction? Well, apparently when your name is Buddy Standler and you’ve had a run-in with the Joker and one of his mind-altering devices, this all seems like a great plan. He even went so far as to interject cringe-inducing puns into his racket. Maybe he’ll ‘ketchup’ later. Ha ha! 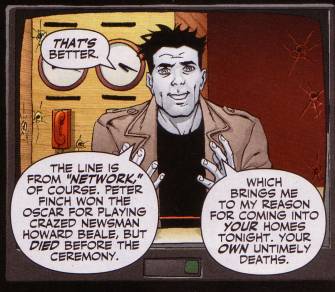 Burt Weston gets the nod here because primarily of the completely arbitrary choice he’s made in his criminal misgivings. Basically, Weston so badly wanted to be an actor portraying quirky, rich villains that, when turned down, he randomly chose a life of crime. However, when he is caught or thwarted, he fakes his own death much akin to Redford and Newman’s deaths in the Sting. Now that’s attachment to a craft. 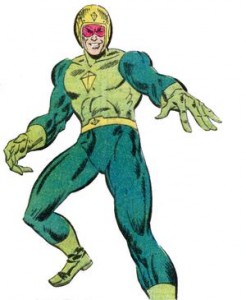 For a guy who’s soul purpose is to eventually thwart and destroy the Peanut’s Kite-Eating Tree with a barrage of gliding implements of his own in a ridiculous cross-over thankfully planned for never, Chuck Brown sure has seen a ton of page time in the history of Batman. His only claim to criminal fame is his ability to use kites. Yes. Use. Kites. This would seem a whole lot goofier if it weren’t for the fact that those giant box-dragon-three-string dealies are heavy as shit! 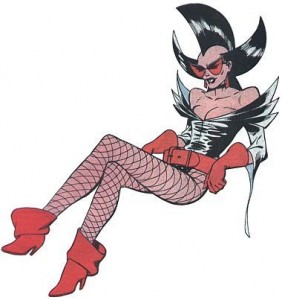 I’m not sure what’s in the Kool-Aid around the DC cafeteria, but those wacky, screw-headed writers sure love to come up with object-specific criminals. Take, for example, Margaret Pyle, aka: Magpie. A woman who’d otherwise be a common and ordinary jewel thief is magically transformed into something fifty times more bizarre by the simple fact that she steals only gems with ‘Bird’ names. Dedication to the Nth degree. 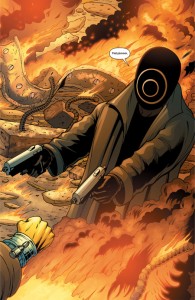 Wow. Assuming yo know what the word means (go on, look it up… I’ll wait) you can safely ascertain what this villain’s ‘powers’ are. He’s like the Michael Winslow of Batman bad guys. 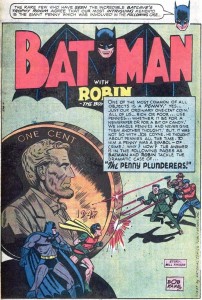 The name already sounds as though one of two things is quite likely. Either this criminal’s name is Penny (too obvious), or he or she prefers pilfering pointless pennies. Yeah, well, it’s the latter, which makes you wonder why it couldn’t have been the former just so we could have a slightly better mastermind here. Alas, his name is (get ready for the pun) Joe Coyne and his entire purpose for making his one singular appearance was to allow Batman to take his giant coin for the Bat Cave, a staple that has since been ret-conned to Two-Face. That’s what you get for making no ‘cents’. Get it? 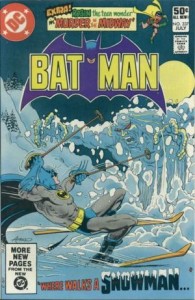 This one really deserves the write-up given to it by Wikipedia. Trust me: “Klaus Kristin is the son of a male yeti and a human woman. In his first appearance he comes to Gotham City to freeze it over, but encounters Batman in the process.” Yep, the son of a yeti and a woman. That’s got to be like parking a tank in a garage. 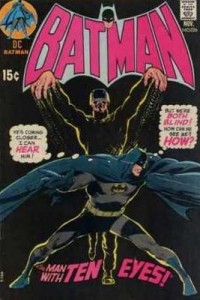 Let’s say you are a former warehouse employee and military vet who’s lost his sight as result of a terrible explosion. Then, out of the blue, some wacky criminal says he can reattach you retinas thereby restoring your vision! Kick ass right? Well, not so fast. As it turns out they’ve been affixed to your finger tips. Oh, and you have to fight Batman. Already this is sounding really unfair. Add insult to injury by making your digits as tender and vulnerable as real eyes… and you have to FIGHT FUCKING BATMAN! Well, you can imagine how far this went. 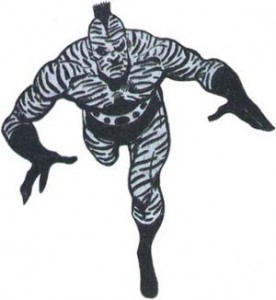 Now here we have a second-rate thief who is only called Zebra Man thanks to his black and white coloring. Oh, his actual powers grant him what is referred to in the comic as ‘demagnetism’ whereby he can literally attract and repel any object type such as wood, plastic, flesh, concrete, etc. as long as it isn’t metal. That’s right, in a city practically brimming with metal objects, this fool, with his opposite-magnetism, can’t do a thing with ’em. That’s great.

The Cluemaster and The Spoiler 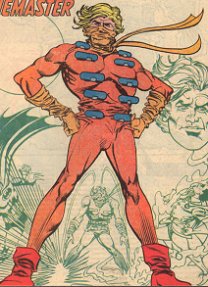 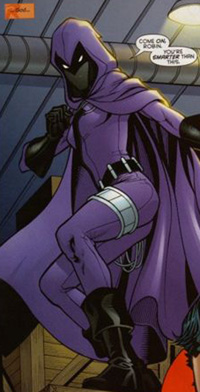 You get two for the price of one here since the latter is directly related to and responsible for thwarting the exploits of the former. You see, Arthur Brown is a former game show emcee who’s initial life of crime began and ended with his obsessive need to leave ‘Game Show’-like clues every time he committed a wrongdoing. After a stint in prison, he was released no longer under the control of his vices yet still a criminal at heart. His daughter, angry at her dad for both being a criminal and now not dropping hints everywhere he goes, donned the guise of The Spoiler who literally spoils her dad’s crime sprees so the law and/or Batman can find him. There’s your classic dysfunctional relationship. 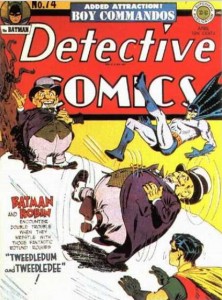 The set-up is a classic one: a pair of criminal thugs who just happen to look enough alike to work together as twins. I say look alike because the two in this case are not brothers, but cousins and just happen to love dressing like the characters from Alice in Wonderland. Ah but here’s the best part: these two have the greatest pun-tastic names of all time. They are Dumfrey and Deever Tweed. 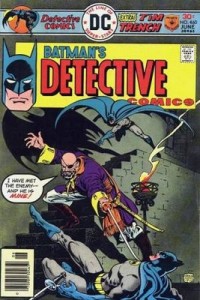 If one of your main goals as a criminal is to try your damnedest to discover Batman’s true identity, might I suggest you not do so dressed as a flamboyant pirate. Just sayin’. Karl Courtney, however, is completely nuts and did indeed choose the path of the pirate. He was born of quadruplets and, as an adult, became positive that all three of his brothers (triplets, mind you) were, somehow, Batman. I’m still not seeing why a pirate though. 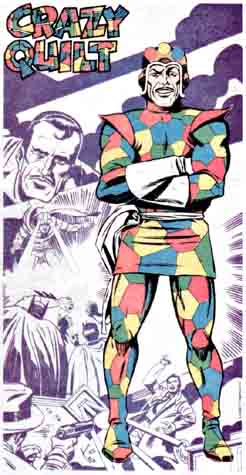 Yet another in the pantheon of sense-deprived villains who have been augmented… with a price! Here we have one Paul Dekker, a rather gifted painter who moonlights as a bad guy hiding clues and what-not in his pictures. Once blinded by a gunshot to the eyes, his prison sentence grants him the ability to undergo a radical treatment where a helmet is used to fix his vision. Ah, but here lies the problem: he only sees in a jumbled mess of colors and patterns much like a quilt… as it were. Yeah. Stupid.