Humor > Pop Culture > The Most Ridiculous Trading Card Sets Ever

The Most Ridiculous Trading Card Sets Ever 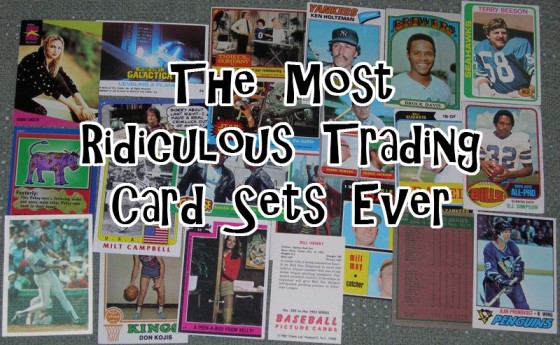 So, you probably thought to yourself as soon as you clicked on this article, “what the hell could this dude possibly be talking about and what bat-shit crazy thing brought it on?” Yeah, those exact words are coming out of your mouth right now. I know my audience. Well, I’ll tell you. I saw this big fat bag of nonsense over on Yahoo:

“Entertainment collectible company Panini America has launched the Justin Bieber trading card set, which will hit shelves at Walmart, Target, Toys “R” Us and other retail outlets this week.“

It suddenly occurred to me that we might be witnessing the first true sign of the Apocalypse. What could this company be thinking? Well, that’s a loaded question since it’s pretty obvious, actually: money. Thousands upon thousands of rabid, bug-eyed tweens slobbering all over themselves to get their hands on little pictures of Bee-Bur and all the wee nuggets of useless info festooning the backs. I’m sitting here shaking my head in shame even having to think about it.

Well, it’s safe to say that this can’t possibly be the most epically horrific visage to ever grace a set of trading cards, but it sure made me wonder what might be. Well, I scoured the inter-webs and now we’re all gonna know. So get out those bound sleeves of pristine cards featuring the likenesses of your secret favorite famous faces, and let’s take a look. 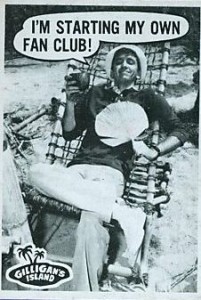 One of history’s most iconic and cult-followed television shows has got to be Gilligan’s Island. We all know the premise: castaways are stranded on an island, two of them are sexy chicks, one of them was Jim Backus, and Gilligan was always getting whacked in the head by the professor for being a colossal dipshit. Anyway, according to tvtoys.com, here’s this news: “Gilligan Island trading cards are the most valuable items to collect. Produced by Topps in 1965, the 55-card set includes mini-movie scenes on the each back of each card. When the cards are put in order and fanned, two separate movie scenes are created. Each card sells for $10-$15 today. A reprint of this set was produced recently, and sells for about $25. Numbered and limited to 2,500 sets, the reprints include an additional card sporting the original wrapper design.” Now that’s exciting. 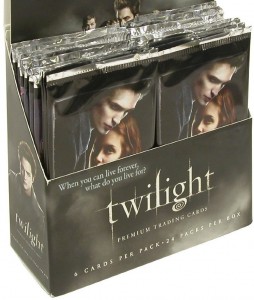 Sparkling vampires. Emo love interests between a bitchy chick and some crazy dude who turns into a werewolf. And that’s about it. Look, I’m not going to claim to know anything or give an ounce of a shit about these Twilight books and movies, but hordes of chicks the world over sure as hell do. I suppose if you’re gonna follow the stories and watch the vapid flicks, you may as well have a set of trading cards, right? It’s your damn collection. Loser. 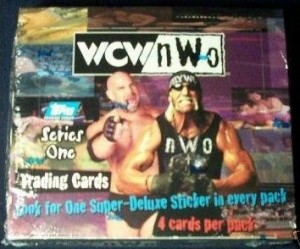 It’s a pretty simple rule of thumb that nothing ever lasts, good or otherwise. But it’s always the mediocre crap that seems to stick with us for the longest time. Remember WCW (World Championship Wrestling) and their inter-league faction calling themselves the NWO (New World Order)? Of course you do. During the late 90’s and early ’00’s, they were the top dogs in the wrestling world even going so far as to best that juggernaut known as the WWE. But they were just flashes in the pan, and soon, after the buyout, they’d be gone as quickly as they came. But why not become the proud owner of a trading card set based on your favorite Wolf Packers? I’ll trade you my Hollywood Hogan for your Sting!

When you’re the bastard step child of a set of cards produced to parody a popular doll franchise, there’s a lot of distance between you and greatness. Garbage Pail Kids were exquisitely produced card sets pushing well into their third decade of existence made by the Topps company as an answer to the saccharine sweetness of the long-since popularity-dead Cabbage Patch Kids. But the dirty little kids that no one talks about a parties were the Trash Can Tots. A set of cards only available through vending machines at discount stores, the TTT’s looked like images designed by third-year blind mental patients. They were obviously created to cash in on a craze, and then quickly kicked to the curb. Apparently they’re collectible. Who knew. 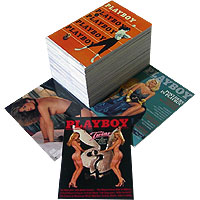 Guys don’t need too much of a reason to rub one off. Does that shower curtain have a nondescript pattern that might look like tits? Pass the shampoo. Is that pay channel coming in a little fuzzy with a gray line nearly completely covering that lady’s bush? Tissues, please. So it stands to reason that a completely portable set of nudie collector’s cards would eventually be made available to anyone. Now you, too, can slink off to a restaurant bathroom while your grungy date waits for coffee, and arc one into the toilet to a few naked models in your pocket. Best idea ever? Probably not. 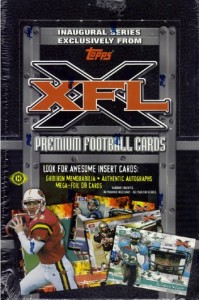 I find it nearly impossible to laugh at anything more heartily than a new, exciting sports league folding like a lawn chair after one shaky year in existence. For some God-awful reason, Vince McMahon of WWE fame decided it would be really cool to invent a different way of playing football that included looser rules and regulations, a more ‘X’treme approach to the game, and, subsequently, tons more fun. Well, there scarcely could have been a more epic fail on his part, because from the moment the XFL was active, it began its steady downfall. Like the inevitability of a train wreck resulting from an engine with a few missing wheels, the XFL was bound for disaster. Even a trading card set couldn’t save its demise. Too bad. 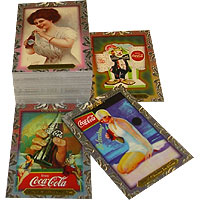 I just don’t understand so many people’s rapt fascination with a beverage. I get that it’s the classic nature of its existence as a whole and its place in Americana. I get that each piece is different and each design is a beautiful piece of home-style art. And I even get that, to some, it marks specific places in time for them quite fondly. But come one, folks, it’s a damn product label! You don’t see whole communities dedicated to the longevity of Campbell’s Soup! What? You do? There are those people, too? I stand corrected. And I’m sorry. Here’s some cards, now let me hide in shame.

Future scientists are an odd lot, to say the least. They seem excessively introverted, disinterested in many of the things other kids find fun like video games and superheroes, and tend to dream big dreams of one day fucking a sexy green alien on the planet Epsilon 12. But there is one thing that keeps these -dare I say, nerds, going. Every aspiring Asimov wants a pristine set of outer space trading cards! Why they can trade a ‘Moons of Saturn’ rarity with their pals for a ‘Worm Hole’ series featuring three different anomalies! What could possibly be more fun! Look mom! Uranus! 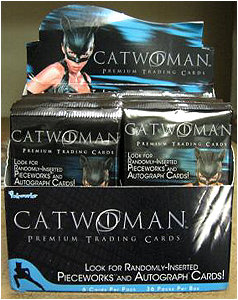 If you’re gonna make a shitty movie, you might as well go all out. Make some toys, make a cereal, make some shirts, and for fuck sake, make a set of cards! After seeing how much crap oozes from your film, everyone will want to rush right out and snatch up a few packs of those cards and trade them with the people they want to have punch them in the eye! Oh, and make sure your leading lady is dressed just skimpy enough in a shitty looking cat outfit to warrant even more trading potential! Who cares if you have no solid plot, story, or theme… TRADING CARDS, bitch! 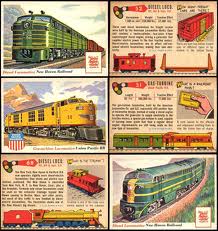 I can quite easily find a lot of things quite fascinating: snakes, beer, bizarre food, boobs… I’m a pretty simple guy with surprisingly simple tastes. But what’s the goddamn deal with trains? I just do not get it. Yes, I have been known to enjoy their roving graffiti, but that’s not even the same thing. I know people -quite a few, actually- who are literally obsessed with trains. For the life of me I just don’t get it. They’re loud, annoying, and loud. And, of course, they have a trading card set. Let’s swap cabooses, buddy. No. No thanks.